After the California fires, the Diocese of Santa Rosa finds community among the ruins 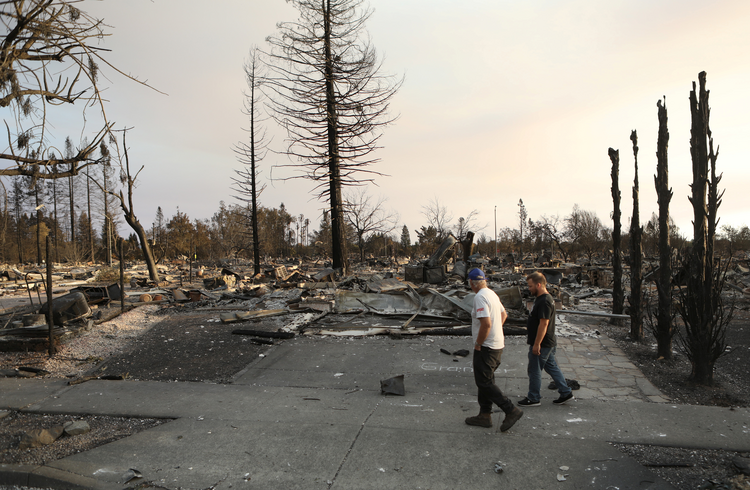 A neighborhood destroyed by wildfire in Santa Rosa, Calif. The Diocese of Santa Rosa "has been hit hard" and "is in an ongoing state of uncertainty" because of Northern California wildfires that began the night of Oct. 8, said Bishop Robert F. Vasa. (CNS photo/Jim Urquhart, Reuters)

It has been almost two weeks since Father Ron Serban, pastor of Holy Spirit Church in Santa Rosa, Calif., was awoken by banging in the middle of the night. The scene that greeted him at his front door is hard to forget: “Wind, sirens, smoke everywhere. Fire. People screaming, running around not knowing what to do.

“There were all these propane tanks and gas tanks and transformers blowing up. You’d stand there, and you’d hear explosions on three sides of you. It was like being in the middle of a war.”

Father Serban speaks from experience. He spent 17 years in the military, first as an airman in the U.S. Air Force, later as a military chaplain.

Exact figures are still hard to come by as the fires continue—the parish remains in a mandatory evacuation zone and two such orders have been issued as different fires were sweeping through. But upward of 3,000 buildings, including the homes of at least 15 of Father Serban's parishioners, have been destroyed just in the city of Santa Rosa, a community of 175,000 people. When Father Serban returned on Oct. 16 to get some computers, there were still embers and ashes floating in the sky.

“Just like 9/11 changed our country, these things, I think, change people’s hearts.”

The diocesan chancery escaped the fire by just one block on either side. Bishop Robert Vasa and his staff have only just been able to get back into their offices, but phone lines remain down. When the fires took out much of the cell phone reception, Bishop Vasa parked his car underneath a tower that had not been damaged. Using his phone to create a mobile hotspot, he spent the day working from there.

“I didn’t even know you could do that,” I told the bishop.

He laughed. “Neither did I!”

It is not easy to stay connected in Diocese of Santa Rosa, a community of 165,000 Catholics spread over almost 12,000 square miles along California’s northern coastline, in the best of times. Cell reception in some areas can be spotty; and even in the city, Father Serban notes, it is not unheard of for electric power to suddenly go out.

That first night of the fires, Father Serban stayed in the church parking lot in case people showed up panicked or afraid. “And sure enough people were driving in scared. I told them just go, follow the cars.” He would give them a blessing and send them on their way.

Since then he has been traveling throughout the city, offering Mass at parishioners’ homes. “It’s like apostolic times,” he says. “The church in dispersia. Even though Holy Spirit has a geographical demarcation, most people come from different places. We don’t really have really one area to find people.

“That was really important to me,” he says, “that they knew that a Mass was going on for them.

Bishop Vasa has also spent time visiting evacuation sites at the county fairgrounds and at Finley Park, where many residents of care facilities have been relocated. “These people are refugees in a major way; They don’t even have the capacity to get up and walk for themselves. It was heartbreaking to visit.”

A major source of concern for Bishop Vasa right now is the plight of families with children in Catholic schools. Cardinal Newman High School and the adjoining Saint Rose Elementary sustained serious fire damage, though the full extent is not yet known. But beyond the structural damage to the schools, he wonders, how many of the diocese’s 4,000 schoolchildren have lost their homes? How many of their family members no longer have a viable workplace or income?

“I want to be able to say to those students and the principals, ‘Your children will not be [forced] to leave this school because of an inability to pay.’ These children need the ability to connect with their friends, they need that community support.

“That’s not an insurable cost, but I want to make sure it’s viable for them to stay.”

Moving through these strange and awful days, Father Serban has been repeatedly struck by what he witnesses going on all around him. “You drive around and you see people with cases of water giving it to each other. People giving out masks, opening their houses and making meals. People don’t even know who you are, they’re just reaching out. I think this is what it’s supposed to be like.

“Just like 9/11 changed our country, these things, I think, change people’s hearts. [They realize]: ‘Wow, this person did this for me, or I was able to do this thing for this person I’ve never met.’ It changes our hearts.”

On Saturday Bishop Vasa wrote to the many evacuated and suffering, “While we are far-flung and scattered, I need you to know that you are not alone.”

To help or to learn more, visit Santa Rosa’s Sign of Hope site. It offers both the bishop’s almost daily letters to the diocese and the opportunity to donate.

Correction on Oct. 21, 9:42 a.m. ET: Due to an editing error, a reference to the number of homes destroyed by fire in the Diocese of Santa Rosa suggested that only 15 homes of parishioners had been affected. The sentence has been re-edited for clarity.