St. Maria Goretti teaches me to see God in the faces of murderers and rapists 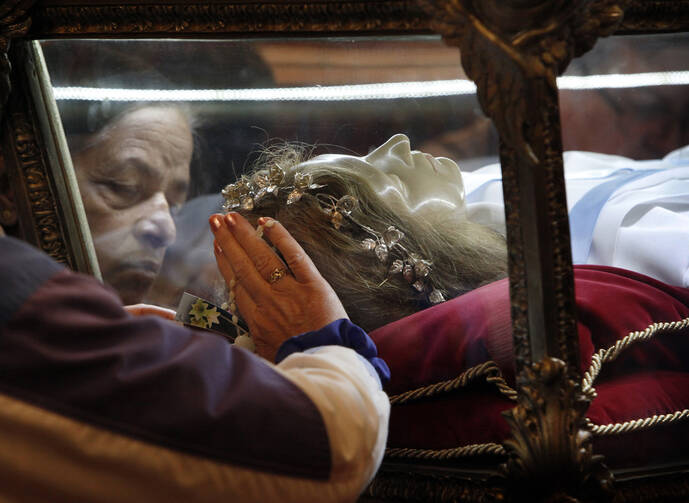 Worshippers venerate the relics of St. Maria Goretti at St. John Cantius Church in Chicago Oct. 12. The major relics, which are virtually all of the skeletal remains of the saint, known as the "patroness of purity," are on a U.S. "pilgrimage of mercy" this fall that will go to nearly 20 states. (CNS photo/Karen Callaway, Catholic New World)

The sex offenders, especially those who have harmed children, are the lowest of the low in prison. Murderers look down on them, as though murder is a clean crime compared to a rape or a molestation, both of which reek of shame. It is a strange hierarchy.

Because the yard of the library where I work is a sensitive-needs yard, I encounter many inmates who, upon their parole, will have to register as sex offenders for the rest of their lives. The S.N.Y. houses those whose safety would be compromised in a general population yard: sex offenders, child killers (the exception to clean murders), gang dropouts and gay inmates. An inmate requesting sensitive-needs placement can never go back to general population. It is a brand for life, as indelible as any tattoo.

I do not usually look at the files of the inmates on my yard, the exception being if I am hiring a new library clerk. (The library offers five highly coveted, paid positions for inmates.) Over the years, I have hired murderers and molesters and one rapist. Most of my clerks have been respectful, hard-working and contrite, men who have committed terrible crimes and made huge mistakes but who are trying to figure out how to be a decent, better person.

It was the rapist who made me question prison’s hierarchy of crime.

Incarceration is their punishment. But in the library, we focus on rehabilitation. It was the rapist who made me question prison’s hierarchy of crime: Why was he worse than any other convicted criminal with a life sentence? Why was rape worse than murder?

Which has led me to St. Maria Goretti.

I admit that Maria Goretti was a problematic saint for me, ever since I gave birth to four daughters. Maria’s story, briefly: At age 12, she told her would-be rapist, her 18-year-old neighbor Alessandro, that God would condemn him to Hell if he raped her and that she preferred death to the loss of her virginity. So he killed her, stabbing her many times with a dagger. In sainthood, Maria Goretti has become a cult-like figure, implying that female virginity is more sacred than life. Hence my discomfort with her: As a mother, I would much prefer my daughters to submit to rape than to welcome death in defense of their purity (not that I even want to think about this horrifying scenario). Take the virginity, I thought. Leave the life, for there is no therapy that can restore a life. I avoided like the plague any reference to St. Maria Goretti as a role model for girls.

But prison has made me revisit the second part of Maria’s story. She lived for 24 hours before succumbing to her wounds. Before she died, she forgave Alessandro. She then pursued his soul after her death, appearing to him in his dreams and forgiving him repeatedly. The miserable Alessandro could not accept her forgiveness. Gradually, though, his heart changed. Although she lost her life, Maria gave Alessandro a new life of possible redemption. After serving his prison sentence of 30 years, Alessandro went to Maria’s mother and begged for forgiveness. He spent the rest of his life as a lay brother and lived to see Maria’s canonization.

The compassion of both Maria and her mother take my breath away, because I understand that if my daughter were raped, I would want to dismember the rapist myself, slowly and mercilessly. That is my instinct, of course, not the law. In the case of my clerk, he had been sentenced to 20 years to life, with the possibility of parole. His case made me wonder: How much can a person change in two decades, from a drugged-out, angry teenager to a thoughtful man? How does rehabilitation work? How does God’s grace work?

But the God of surprises is also the God of mercy and redemption, a lesson I now take from St. Maria Goretti.

Redemption. Recovery. Remorse. Reconciliation. These concepts are paramount to people of faith. At California Department of Corrections and Rehabilitation, we emphasize rehabilitation.

An Astounding Mercy: The conversion of the man who killed St. Maria Goretti
Raymond P. Roden

Today, in California, the 18-year-old Alessandro would have to register for life as a sex offender. There are over 106,000 registered sex offenders in California alone, all of whom are lifetime registrants. The fact that the registry is public means that anyone who appears on it is possibly subject to persecution, community ostracism, job loss, retaliation or worse. The numbers have swelled to the point that, for law enforcement officials, keeping track of the true menaces to society, the sociopaths and repeat offenders, is more and more difficult. Pending legislation would introduce a tiered system of registration, recognizing that a drunk who urinates in public or a 19-year-old who has sex with his 16-year-old girlfriend pose far less of a risk to the public than a sexual predator.

As the mother of daughters, I never would have believed that I would see the face of God in the molesters, murderers and rapists in my library. But the God of surprises is also the God of mercy and redemption, a lesson I now take from St. Maria Goretti. The flip side of her fevered embrace of virginity is her belief in—and prayer for—the rehabilitation and redemption of her attacker. If Maria could forgive this shameful transgression against her, perhaps society can do the same for the rehabilitated sinners and criminals among us.

A 19 year-old who has consensual sex with his 16 year-old girlfriend may be guilty of statutory rape, but not rape in the sense of forced, nonconsensual sex. This is not to say that statutory rape is not a crime, but this instance would be a very grey area.

The story of Maria Goretti is not inspiring. She faced the choice between being raped and possibly impregnated, and being killed. That she chose death is sad, but not uplifting. If she had chosen rape instead, she likely would have been raped repeatedly, become pregnant and then forced to marry her rapist - this may have been a fate worse than death. The story of Maria Goretti illustrates why women consider contraception a right and the availability of abortion a necessary evil. Both help women avoid being forced into marriages they would not choose.

Maria Goretti is a man's saint. She glorifies passivity, virginity at all cost, and forgiveness of all crimes committed against her. If she were a woman's saint, she would have conked the assailant on the head with a large frying pan and ended the discussion right there.

The impression I have about why sex offenders are at the bottom of the food chain in prison culture is because so many of those convicted of crime and imprisoned were sexually assaulted when they were young. Many sex offenders were no doubt sexually assaulted when they were young. Sexual assault leaves such pain in its wake, can leave PTSD (a brain injury, NOT a psychological problem), can create a capacity for distrust, a fear of intimacy. It's not over when it's over---it has just started. We've got to put more resources and will into helping those who are thus assaulted get past the life dilemmas created by the assault. Perpetrators? Repent!