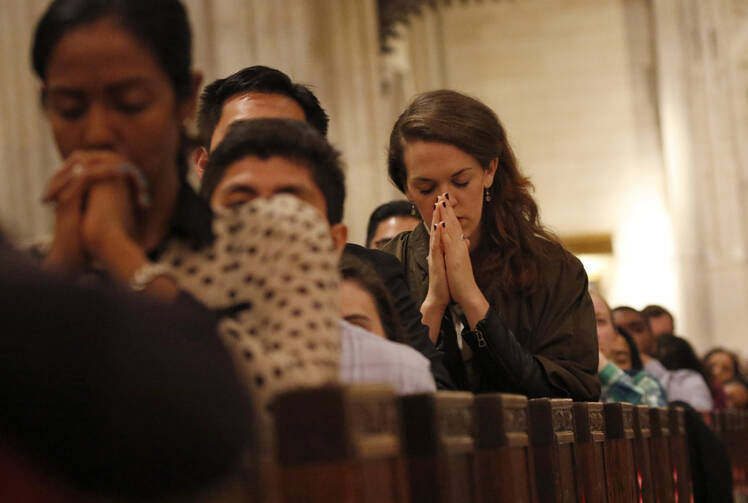 Catholic News Service—Young adults are tough to minister to. We’re on the move, our peers aren’t going to church with us, and we’re most likely to sneak out of the back of the church before someone can hand us a parish registration form.

But we desperately want community — and faith-based ones especially. As we move into new phases in life, we remember fondly the bonds that were formed in our high school youth groups and campus ministry service trips.

One of the things that has surprised me most about starting a new podcast for young Catholics is how many people write in to say that just knowing there are other young Catholics out there on the other end of their headphones is a consolation for them.

Unfortunately, so many of us suffer from this awful tendency to demand a Catholic Catch-22:

Me: Heck yeah I'm a pious Catholic who wants more community
Also me: no I won't join any church groups

The preparatory document for the 2018 world Synod of Bishops on youth instructs the church to “give major importance to young people’s involvement in the structures of participation in diocesan and parish communities, starting with pastoral councils, inviting young people to make their creative contribution and accepting their ideas, even when they appear challenging.”

I think the document has it right. The onus is on parishes to open up spaces for young adults to serve. But so many young adults hold back from engaging in parish life because we’re waiting for the world’s most dynamic young adult group to form before we make any first moves toward committing to a parish or community.

Young adult Catholics suffer from lacking a community of other young adults, but we fundamentally suffer from a lack of a wider Catholic community.

I was nervous when I filled out the information card for ARISE, a new small-group, faith-sharing program held once a week in the home of a parishioner. I had apprehensions about not knowing anyone in the group, about being the youngest person by far, and therefore not having enough life experience to have anything meaningful to contribute. And as I sat around George and Kathleen’s table for the first meeting, I realized those apprehensions that I had were accurate — but they weren’t at all limitations.

There are some things that you just can’t get at a Theology on Tap event with other 20-somethings: like being in the presence of two couples, one married for 25 years and the other more than 50, while I began a new relationship; hearing about the faith of parents and single adults; and learning that friendship can be just as much of a challenge later in life but remains fiercely as important.

Young adult Catholics suffer from lacking a community of other young adults, but we fundamentally suffer from a lack of a wider Catholic community. A parish can offer that — even without the hip young adult group.

If you’re nervous about going to a meeting or a program alone — that’s OK. See if you can find just one other person your age who would want to go with you. They could be a fellow parishioner or just someone who you Soul Cycle with and also happens to not think it’s totally crazy that you go to Mass on Sundays.

Why is it so hard for young Catholics to find the right parish?
Kaya Oakes

Now, this isn’t exactly a strategy for some of our peers who haven’t been active in the church for a long time, or ever. New modes of evangelization remain to be developed there.

But for those of us who have had recent experiences being a part of a church community, whether that was your Catholic high school or your college campus ministry center, we can take a courageous first step into welcoming the community that a parish can give us, imperfect as it may be.

Zac Davis is an assistant editor for digital strategy at America, where he co-hosts “Jesuitical,” a podcast for young Catholics. Find the podcast at http://apple.co/2vGECqB. He is a guest contributor for “In Light of Faith,” a series of columns focused on and written by millennials and young adults.

When I was a young adult I observed several things you might take into consideration.
1. Parishes were often socially centered on their schools, therefor on parents with children. Educated, employed adults without spouse or children were outliers, not part of the network.
2. When organizations wanted new, young members, they wanted the senior members to continue to run things and the new, junior, members to provide labor, agility, or cash, not ideas, not change ANYTHING. They expected subordinates.
3. Young adults were seldom asked directly, personally, to take on a task. There was almost no direct outreach to them as adult peers.
4. Parish leadership seemed locked up. Joe ran the sports, Mary handled the collection. Jane ran the bake sale. Harry and his guys always set up the parish picnic. They were fiefs, not to be intruded upon. There was no provision to rotate leadership and involve new blood. Annual events sometimes ceased when the honcho died or moved away. [Proposal: EVERY volunteer job be a three year term, first as assistant, second as sole chief, third as mentor, then out. Also good for financial accountability.]
5. The more the parish is a hierarchy, the less appealing it is to young, energetic, innovative, intelligent, educated people.
6. "Young adult groups" age. The 24 year-olds do not want the same as the 35 year-olds.
[Suggestion: Every eight or ten years the parish leaders (four to six) need to invite the under-30s to a meeting and outline for them how the establishment sees the parish, especially the warts and anxieties. Then the establishment needs to listen, for as long as necessary, to how the young adults see the parish. Finally, the leaders need to ask the younger generation to hold their own meeting and come up with some kind of parish project which they would organize and staff for the good of the whole parish. It is in this working together that people build community. ]
7. The only young adult group which seemed to build community met at and was named for a large apartment complex, had lecturers, discussions, beer and wine and cheese, an occasional Mass in the meeting room and two annual retreats. The members of this group participated in one of the parish choirs with a young director and almost completely staffed the Sunday School. Off site, serious discussions, normal social conditions, all welcome regardless of faith, warnings of specifically religious events, group mailing list, no parish registration. Very relaxed priest who participated socially, was present but not in charge. Maybe I missed something, but this group drew participants from a large section of a metro ares.
8. I am forty years past being a "young adult" but I still painfully remember not being welcomed into the community. Maybe this generation will be received better.