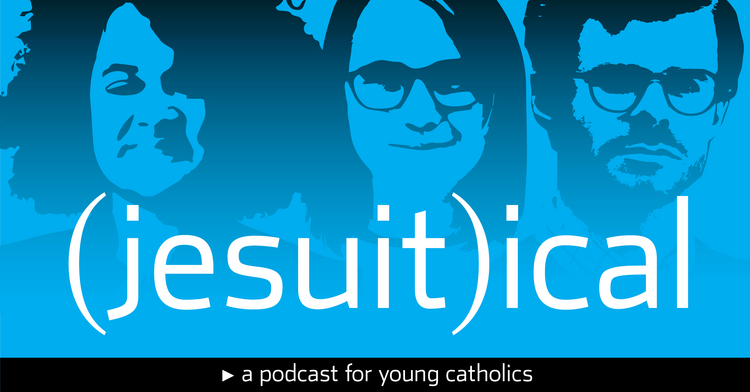 You got your ashes. You skipped lunch. You have 40 long days without chocolate or soda or Facebook or whatever you gave up ahead of you. And the hosts of jesuitical, a new podcast from America Media, would like to invite ourselves to spend them with you—in your earbuds, on Twitter and Facebook and in any other way you want to join the conversation (and not just during Lent).

What is jesuitical? It's a podcast hosted by three young, lay editors at America—Olga Segura, Zac Davis and myself. Each episode we will bring you some of the top (and maybe more obscure) Catholic news of the week. We will also speak with a guest who offers a unique perspective on world events, culture or our faith. And we'll ask: Where do we find God in all this?

Why jesuitical? We want to reclaim the term. Jesuitical, according to the Oxford American Dictionary, means "Dissembling or equivocating, in the manner associated with Jesuits." Well, we aren't Jesuits, but we work with them, and as far as we can tell, jesuitical means something else. It means asking the questions no one else is asking. It means bringing the Gospel message to streets, televisions, bars and anywhere else the issues of the day are being debated. It means paying special attention to the needs of the poor and marginalized in all that we do.

Sounds lofty. We're also just so-called millennial Catholics who hate the term millennial and are trying to figure out how to live out our faith in an authentic way and sometimes just need to talk about it out loud.

So, here's the plan. God-willing, we will release a episode every Friday going forward. You can it on our website or wherever you get your podcasts. But subscribing to the podcast on iTunes is only step one. We want to hear from you. Send us your comments, questions, memes, recipes, interview ideas and prayers, and we'll talk about them on the show. And, if you like what you hear, tell your friends about it. Or at least your mom and priest.

It seems this is an effort to engage with young adult Catholics primarily, using platforms popular with younger adults. . However, many - prehaps most- of those who read America's website are older adults, and many of us have hearing loss.

Fr. Malone also has a hearing loss, so I would suggest that those behind this effort consult with him.. It would be VERY nice if the podcasts and videos would be accompanied by transcripts, so that those of us who can't understand words clearly using earbuds could be part of the conversation.

This looks great, but I'm a middle-age guy. I'll pass on the link to my 20-year old child but it's out my hands after that!

Vince, my kids are older than yours, and I am really grateful for this podcast. I haven't missed an episode and have recommended it to people of every age. It offers freshness and faith for the real world as well as great guests of all ages. I hear news that is not covered elsewhere, and the "Consolations and Desolations" segment has been a grace, helping me reframe how I look for God in many situations. Please don't tune out the voices of our young people. (You may find it reassuring that they even note "Adult Supervision" in their credits.) Thanks, Ashley, Olga, Zac and America, for a wonderful show. Blessings on you all.