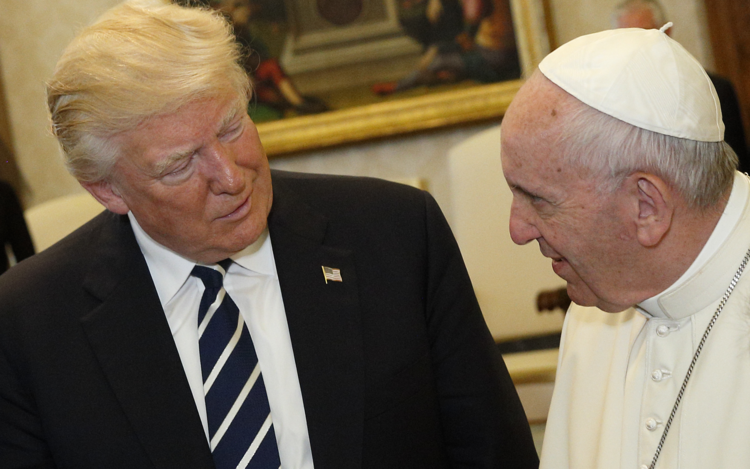 Pope Francis talks with U.S. President Donald Trump during a private audience at the Vatican May 24. (CNS photo/Paul Haring) See POPE-TRUMP-MEET May 24, 2017

The sources, who asked not to be identified, acknowledged that there had been some “apprehension” on the eve of the visit, which was reflected on Francis’ face at the beginning of his first meeting with the U.S. president. But, according to these sources, the atmosphere became more relaxed during their 30-minute face-to-face conversation behind closed doors. A warmer, friendlier and at times humorous atmosphere prevailed during the subsequent presentation of the U.S. delegation and the exchange of gifts.

“Pope Francis was happy because he and the president talked in a relaxed, sincere way on the issues that they each care deeply about. He felt the meeting went well,” one source close to the pontiff told America.

“Pope Francis was happy because he and the president talked in a relaxed, sincere way on the issues that they each care deeply about.”

He did not identify what those issues were, but it can be deduced from the statement released by the Vatican afterward that the topics included the promotion of peace in the world, the situation in the Middle East, the persecution of Christians and the dramatic plight of migrants.

Some media have interpreted the downcast look on the pope’s face as he stood beside Mr. Trump for the group photo with the U.S. delegation as an indicator that their private meeting had not gone well or “was cold,” as some Italian press reported. But a Vatican source who was informed of what happened told America this is “a gross misinterpretation.” He attributed the look on the pope’s face to the fact that, in general, Francis does not like having to pose for photos, and his face sometimes reflects this.

Francis does not like having to pose for photos, and his face sometimes reflects this.

Vatican sources also said that the private talks that took place in the Secretariat of State, after the papal audience, between President Trump and members of his delegation and two of Francis’ most senior collaborators, the secretary of state, Cardinal Pietro Parolin, and the secretary for relations with states, Archbishop Paul Gallagher, went “surprisingly well” and “were much better that expected.”

Mr. Trump was accompanied by Secretary of State Rex Tillerson, the national security adviser, H. R. McMaster, and the president’s son-in-law and senior adviser, Jared Kushner, for the 50-minute conversation behind closed doors that covered a wide range of topics at the national and international levels. According to sources, the president and his “impressive” team engaged freely with the senior Vatican officials and appeared keen to listen and to understand the Holy See’s perspective on the different issues.

The Vatican press communiqué mentioned several topics that were discussed. They included: the “good” state of bilateral relations between the Holy See and the United States; “the joint commitment in favor of life, and freedom of worship and conscience”; and the hope for “serene collaboration” between the state and the Catholic Church in the United States “in service to the people in the fields of healthcare, education, and assistance to immigrants.”

The president appeared keen to listen and to understand the Holy See’s perspective on the different issues.

It said they also exchanged views on “themes relating to international affairs and the promotion of peace in the world through political negotiation and interreligious dialogue, with particular reference to the situation in the Middle East and the protection of Christian communities.” One can safely presume that the crises in Syria and Venezuela were discussed.

The Vatican statement did not mention the Israeli-Palestinian conflict, but sources believe this was also addressed because before coming to Rome, Mr. Trump held talks with the Israeli prime minister, Benjamin Netanyahu, and the Palestinian president, Mahmoud Abbas, and has publicly stated his determination to do all he can to reach a lasting solution to this almost 70-year conflict—something his predecessors tried to do but failed. Sources said Vatican officials were pleased that President Trump seems committed to taking this issue into his own hands and not delegating it to others.

The question of combatting terrorism seems to have also been on the agenda following Mr. Trump’s initiatives in Saudi Arabia to get all moderate majority-Muslim states involved.

Pope Francis and President Trump meet: what you need to know
The Editors

Although the Vatican statement did not list climate change among the topics discussed during the president’s discussions, Secretary of State Tillerson confirmed on the plane to Brussels that this subject was raised in the meeting at the Secretariat of State and said Cardinal Parolin had urged the United States to remain a party to the Paris climate agreement. He revealed that they had “a good exchange [on] the difficulty of balancing, addressing climate change and ensuring that you still have a thriving economy and you can still offer people jobs so they can feed their families.” He described this as “a difficult balancing act” and said, “we look forward to having further talks with them on climate policy.” A decision on the Paris treaty would be made later, Mr. Tillerson added.

From talking to several sources here, it is clear that the Vatican greatly appreciated having had this first opportunity to meet President Trump so early in his term and to discuss with him and key members of his administration issues of global importance. A “positive relationship” appears to have been started between Francis and Mr. Trump—and between the U.S. president and his advisers and top Vatican officials. Channels of communication now exist to continue the dialogue between the two sides. 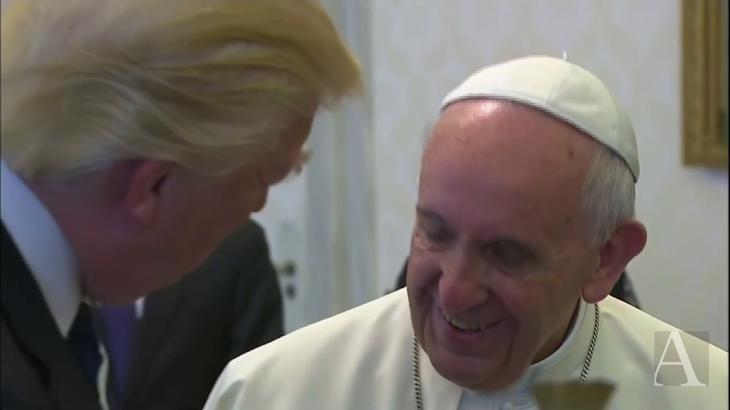