The church is discerning its mission for the 21st century. These Catholic leaders got together to talk about it. 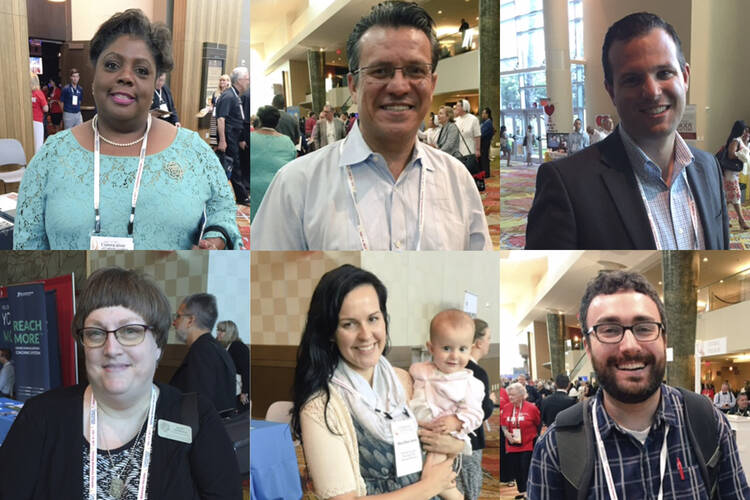 The Catholic Church often is described as a big tent, including people of a variety of backgrounds and perspectives. But the participants at the Convocation of Catholic Leaders in Orlando, Fla., this weekend needed an even bigger space. Approximately 3,500 Catholic leaders, including bishops, clergy, religious and lay people, gathered for dialogue and discussion of how to harness joy and encourage unity on the path to becoming “evangelizing disciples.”

The appointed delegates to the convocation were intentionally chosen to represent the diversity of the church in terms of ethnic, geographic and cultural backgrounds. And while bishops, clergy and religious had a strong and valued presence, lay leaders of the church—some diocesan employees, others simply dedicated parishioners—fueled the discussion.

The appointed delegates to the convocation were intentionally chosen to represent the diversity of the church.

A key motivation for the event was simply to have many voices together in once space, in the hope that new conversations might take place between people unlikely to meet elsewhere. Representatives from many Catholic ministries crossed paths and conversed. “There has been ample time for conversations,” said Mary-Rose Verrett, co-founder with her husband of Witness to Love: Marriage Prep Renewal Ministry. She stood in the midst of dozens of booths promoting a wide range of Catholic ministries, having just come from a panel discussion on marriage, love and sexuality, during which she held her 7-month-old daughter on her lap.

“There have been a lot of holy-spirit-filled serendipitous meetings that would take years to transpire are all happening in a few days and there is a lot of momentum and synergy that happens from that,” Ms. Verrett said. “I think God has a hand and a presence here.”

Joshua Danis, national director of Alpha Catholic Context, said he felt a “joyfulness and hopefulness” from his fellow participants, a contrast to the “negativity and suspicion” he feels are too easy to fall into when considering the direction of the church.

“There’s an expectation and a prayerfulness that the holy spirit really can move through the events here today.”

“There’s an expectation and a prayerfulness that the holy spirit really can move through the events here today,” he said. “That the key relationships can occur and we can come away with a clear understanding of what God wants to do here.”

Many of the weekend’s discussions centered around shining light on people and perspectives too often excluded or forgotten in the church. Mary Heinrich, the membership coordinator for the National Association of the Catechesis of the Good Shepherd, said that she had had many positive conversations with participants about the work her organization does to catechize children and said she was grateful to “talk about the voice of the child that is not often heard in this context,” adding that her discussions with other ministries had been “absolutely beyond” expectations.

Amid hundreds of his fellow participants streaming out of a plenary session, Jesus Abrego of the Diocese of Beaumont, Tex., said he was excited to see the prominent place given to the voices of Latino Catholics at the convocation. “Statistics are telling us we must start doing something different when it comes to Latinos in the church,” he said, referring both to the need to recognize the growing population of Latino Catholics as well as the many who are falling away from the church. “We’re working toward bringing everybody in and most importantly listening to the voices—not imposing but listening—and discovering new ways of doing church in the United States.”

How can participants make sure that the conversations do not end at the conclusion of the convocation?

Mr. Abrego’s sentiments evoked the reoccurring question of the weekend: What’s next? How can participants make sure that the conversations do not end at the conclusion of the convocation and that these conversations result in real changes in the church in the world?

The Diocese of Camden has already thought about how it might answer that question. Michael Laskey, the director of Life and Justice Ministries for the diocese, was one of 23 people sent from his diocese, including a cross section from diocesan leadership, parish leaders, Hispanic ministry, schools and Catholic charities. Prior to the event, each participant was assigned one of the 22 breakout sessions to make sure that they could cover as much ground as possible. “The hope is that we would get together when we return so that we could unpack the experience and to say, ‘What did we hear from people in other dioceses and plenaries, and what might be some fruit of that?’—whether that might be some new ministry program to launch or just a new way of looking at things and approaching things.”

In addition to the discussion around renewing church structures, many participants also found it personally renewing to be part of the historic event. Darlene Jeanlouis of the Diocese of Layfaette, La., who was accompanied by her husband, a deacon in the diocese, found the event to be “dynamic, educational and uplifting.” She said that she now has “a lot of plans to go out and spread the good news of the Gospel that I’ve been listening to.”

Sheryl Moran, a parishioner in the Archdiocese of St. Paul and Minneapolis, said she had been “wondering what God was going to do with me” and that the event was an answer to her prayers. “It’s really good to get all the information and to hear from the experts and to get new ideas.” The conversations have “encouraged me and made me think,” she said. “People keep saying, ‘This is important. God is sending us in a new direction and he’s got something exciting in store for us.’”

I am reminded of the old cliché, "We plan. God laughs." Of course, all discernment is valuable, especially to make the best use of limited resources. Yet God always seems to speak through our times. Currently a few parishioners and a local priest stand on a public street in front of a local grocery frequented by many immigrants and refugees. We hold signs expressing our grief for families broken asunder by deportation, and challenging ICE with the reminder to welcome the stranger. Now immigrants join us, appreciative of our parish solidarity. God calls us in the newspaper, our neighbors calls in the harsh words and deeds of those in power. Just a few can raise awareness.

Is there a list of the dioceses that were represented? The Convocation was by invitation only, participants had to be nominated by their bishops. Was there a real dialogue or just an echo chamber since Bishops picked who they wanted to send?

Organizers of conference deserve commendation for ethnic and racial diversity of attendees. The article does not suggest, however, diversity of religious and cultural views reflected in church's "big tent." A majority of American catholics support married clergy, women clergy, broad rights for LGBTQ community (including marriage), legalization of abortion in some circumstances and other viewpoints in conflict with the institution. The overwhelming majority simply reject the institutional teaching on contraception. Were these viewpoints represented at the conference? Were these issues even discussed? These issues are among those that have led younger generations of catholics to reject the institutional church. I do not think we can plan for the future unless and until we can have meaningful discussion of these issues within the organization.