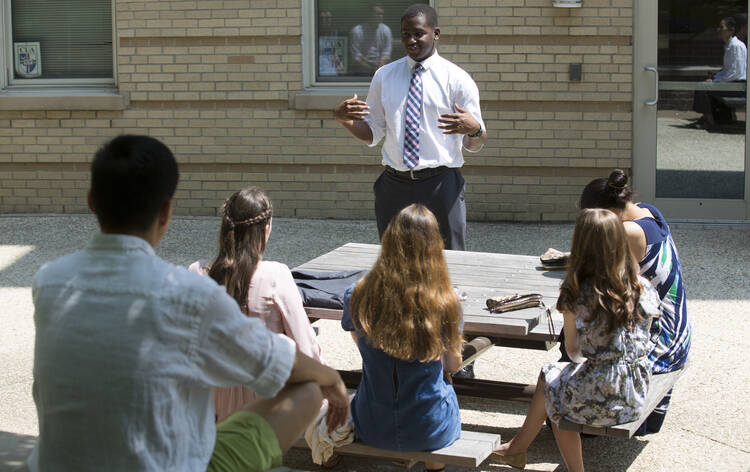 Catholic University of America student Isaiah Burroughs leads a discussion with members of the Rite of Christian Initiation of Adults group he helped guide. Burroughs has been chosen to be one of the Archdiocese of Washington's delegates to the Convocation of Catholic Leaders being held in Orlando. (CNS photo/Chaz Muth)

What would compel more than 3,000 U.S. Catholic leaders to brave steamy Orlando temperatures on the Fourth of July? A desire to take up Pope Francis’ call to evangelize.

From July 1 through 4, some 160 bishops and 200 Catholic organizations will gather in Florida, with delegations of diocesan and parish leaders in tow, to consider how the church in the United States can better promote the Gospel.

“We’re taking the lead from Pope Francis’ vision that the insights on evangelization in ‘Evangelii Gaudium’ be considered in countries’ contexts,” Jonathan Reyes, an organizer of the event, told America. Mr. Reyes is executive director of the U.S. bishops’ Department of Justice, Peace, and Human Development.

Just months after his 2013 election, Pope Francis released “Evangelii Gaudium” or “The Joy of the Gospel,” a letter to the world that has served as a blueprint to his papacy. In it, Francis urges Christians to be missionary disciples, going to the margins to preach the Gospel.

“Christians have the duty to proclaim the Gospel without excluding anyone,” Pope Francis wrote in "Evangelii Gaudium."

“Christians have the duty to proclaim the Gospel without excluding anyone,” he wrote.

The meeting in Florida, called the Convocation of Catholic Leaders: The Joy of the Gospel in America, is sponsored by the U.S. Conference of Catholic Bishops and is an attempt to bring together leaders from various ministries in the church for four days of reflections on where the church excels at evangelizing and where it can improve, Mr. Reyes said.

Four U.S. cardinals and eight other bishops are scheduled to speak, along with lay Catholic leaders including Carl Anderson, head of the Knights of Columbus, and Carolyn Woo, the former head of Catholic Relief Services.

The meeting is the first of its kind, Mr. Reyes said, adding that the only comparable event was a meeting of Catholic leaders in 1917 that eventually led to the creation of the U.S. Conference of Catholic Bishops. The 2017 convocation was born from an idea in the works for nearly a decade about how to bring various factions in the church together for dialogue.

“It started as a much smaller vision to bring together some different leaders in the church, particularly from the pro-life arena and the social justice arena, and get them together to see if there was a way forward,” he said.

The intent is to avoid the tendency of some Catholics in the United States to splinter into two camps, those who protest abortion and identify as “pro-life Catholics” and those who focus on issues such as the economy, immigration and health care and often identify as “social justice Catholics.”

Originally, organizers hoped to bring the groups together to see where their goals overlapped.

The intent is to avoid the tendency of some in the United States to splinter into camps of “pro-life Catholics” and “social justice Catholics.”

But, Mr. Reyes said, “we did some internal research here and we realized the questions that Catholics in the pew are facing are broader than that.”

“But the big thing was Pope Francis,” he continued.

He recalled that when “The Joy of the Gospel” was published, Catholics of all stripes were excited by its contents.

“Pretty much everyone I knew, no matter their opinion about various things, just really liked that document: The call back to Jesus Christ, the call to missionary discipleship, to go out to peripheries,” he said. “It all just rung with people, and that sort of popped with the bishops who were planning this and they said, ‘This is the vision.’”

When “The Joy of the Gospel” was published, Catholics of all stripes were excited by its contents.

Mr. Reyes said the goal was to bring in fresh voices and delegates will travel from across the United States, including a group from South Dakota that ministers to Native American Catholics.

More than $500,000 has been pledged to support scholarships for people attending the convocation. Mr. Reyes’s department and the U.S. bishops’ Catholic Campaign for Human Development have allocated $100,000 each in financial assistance. The Black and Indian Mission Office has pledged another $300,000.

One delegation, from Lincoln, Neb., hopes to find ways to communicate the Gospel more effectively.

“One of the important things to realize about the convocation is that it is designed to remind all Catholics that we each have responsibility for the mission of the Gospel,” J.D. Flynn, who works for the Diocese of Lincoln, told the Southern Nebraska Register. “Each one of us has to be a missionary. And that means we should use our creativity, our gifts, our opportunities and our experience to find areas where we can proclaim the Gospel—as individuals, as families and as parish communities.”

Cindy Black, executive director of Redeemer Radio, a Catholic radio station based in Fort Wayne, Ind., said she hopes to gain from the convocation a deeper understanding of what the pope is saying in “Evangelii Gaudium” and a better sense of how Catholics can effectively evangelize in the modern word.

She said Pope Francis teaches that “we have the truth in the upper hand” but to recognize where others are in their faith journey and to get them to a deeper relationship with Jesus.

The Archdiocese of Seattle is sending 12 delegates to the convocation. One of them, Deacon Eric Paige, said he is eager to acquire tools to “to draw people to engage in the Eucharist.”

Citing a passage from Ecclesiastes, he said, “There is nothing new under the sun,” meaning Christians today have the same task as always.

As Mr. Paige sees it, the Orlando gathering will show Catholics across the country that the “church is in a state of constant evaluation.”

And his verdict is that the church is not experiencing all that God intends, which leaves room for more to happen.

“We have to be open” to what God wants to do, he said.

Will inclusion include LGBT Catholics?

I'm still waiting to be treated like a valued human being by the Catholic Church.

"Will inclusion include LGBT Catholics?"
Good question. Far too many Catholic leaders seem to see evangelisation as a call to go out and condemn us. I see nothing in this report to suggest anything is changing, or will do any time soon.