To save the planet, start by saving the soul 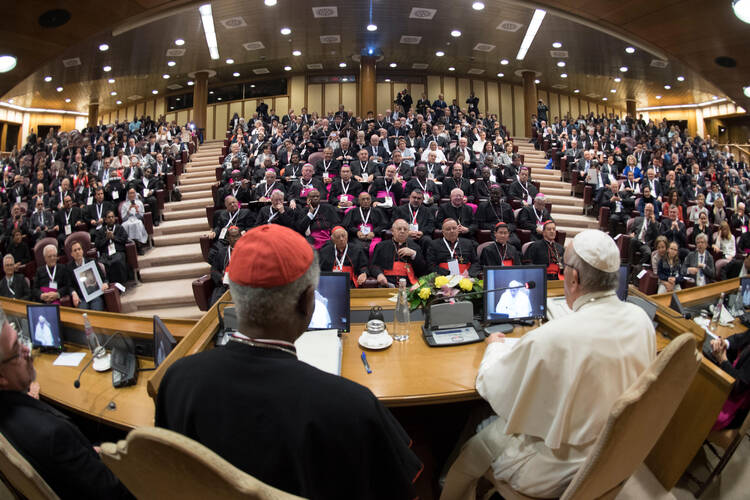 Pope Francis speaks on April 4 to participants at a Vatican conference marking the 50th anniversary of Blessed Paul VI's encyclical on development, "Populorum Progressio." At left is Cardinal Peter Turkson, president of the Pontifical Council for Justice and Peace (CNS photo/L'Osservatore Romano, handout).

Fifty years ago Pope Paul VI published his encyclical “Populorum Progressio” (“The Progress of Peoples”). This letter reaffirmed central themes of Catholic social doctrine: the primacy of the common good; the dignity of work; the right to a just wage; concern for the poor; the welfare of the family. Borrowing Jacques Maritain’s concept of “integral humanism,” the pope insisted that the church was promoting “integral development,” development that included spiritual as well as economic concerns. Not a simple reprise of the Catholic social tradition, the encyclical focused on the new, postcolonial world that had emerged after World War II and the duty of the affluent democracies of the North Atlantic to assist the “developing nations” in their struggle against poverty.

Well received in most quarters, the encyclical cemented the church’s solidarity with international organizations engaged in development and stimulated a myriad of development initiatives in local dioceses. The Catholic University of Louvain, for example, founded an influential, still-thriving center devoted to the theory and practice of integral development. Critics, nonetheless, argued that the approach to development promoted by the encyclical seemed somewhat thin and dated.

The very concept of development had a neocolonial ring. Once the political masters of Asia and Africa, the nations of the North Atlantic now often appeared as imperious schoolmasters guiding the poorer nations to fulfillment on the terms set by the pedagogue. The model for development was marked “made in Washington” or “made in Paris.” As the blood-soaked 20th century lurched toward its end, talk of human progress seemed ironic, if not sacrilegious. The faith of the Enlightenment in inevitable human progress was unsustainable. Scientific innovation had conquered entire diseases, but it had also brought the entire planet to the brink of annihilation with the creation of atomic, biological and chemical arms. The encyclical’s effort to enlarge the concept of development to include the spiritual dimensions of humanity seemed vague: “This harmonious integration of our human nature, carried through by personal effort and responsible activity, is destined for a higher state of perfection. United with the life-giving Christ, man’s life is newly enhanced; it acquires a transcendent humanism.

An explicit reference to redemption must mark the church’s contribution to programs of development.

On Jan. 1 of this year the church inaugurated a new curial office: the Dicastery for Promoting Integral Human Development. Cardinal Peter Turkson, head of the new office, explained its mission at a conference hosted earlier this month by the Initiative for Catholic Social Thought at Georgetown University. He emphasized the richly theological nature of the development the church was attempting to promote. An explicit reference to redemption must mark the church’s contribution to programs of development and the international debate concerning development. Focusing on human potential and progress was insufficient. The reality of sin, vulnerability and repentance must also be recognized in church efforts at solidarity for economic development. Every effort to promote human development must be grounded in the church’s fundamental mission to evangelize humanity through the redeeming word and sacrament.

Cardinal Turkson insists that the ultimate causes of environmental degradation must be sought in the sinfulness of the human person.

An ardent supporter of “Laudato Si’,” Pope Francis’s encyclical on the environment, Cardinal Turkson insists that the ultimate causes of environmental degradation must be sought in the sinfulness of the human person. “Human sinfulness underlies our abusive treatment of the environment. And for us Christians, this is not a terribly strange saying because, as Paul tells us, the world will be redeemed with us. Our own redemption is also the redemption of the world.” Our environmental crises cannot be solved through technological solutions alone. They must be addressed by facing the sinful distortions of the soul, which no longer perceives the cosmos as a gift and no longer recognizes the duty to cultivate it with care. Justice springs from redemptive grace in the economy of salvation.

In this new church effort at promoting human development, Turkson and his associates are placing the concept of integral development in “Populorum Progressio” into a more theological framework. It is the drama of sin and salvation, and not only the spiritual faculties of the human soul, that must be taken into account when the church promotes economic advancement. Only the redeemed and repentant heart can perceive and pursue just relationships with God, the earth and the mysterious neighbor.

John J. Conley, S.J., is a Jesuit of the Maryland Province and a regular columnist for America. He is the current Francis J. Knott Chair of Philosophy and Theology at Loyola University, Maryland, with a particular interest in modern French philosophy.