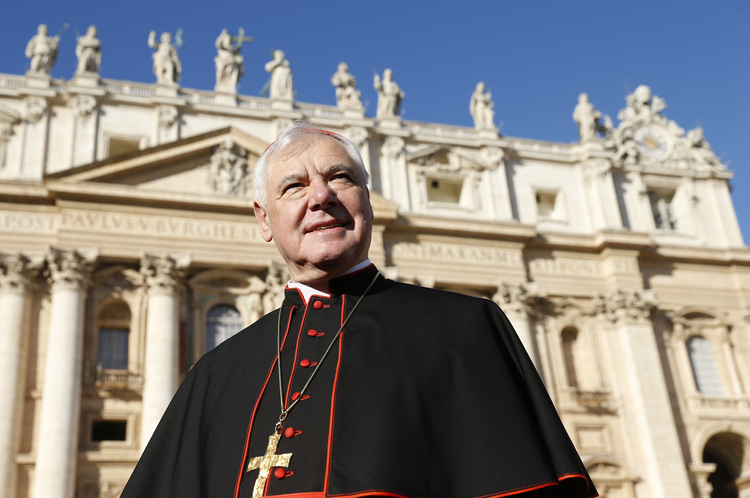 Cardinal Gerhard Muller, prefect of the Congregation for the Doctrine of the Faith, is pictured in St. Peter's Square at the Vatican in this Nov. 19, 2014, file photo. (CNS photo/Paul Haring)

The Catholic Church's commitment to promoting justice, defending human dignity, building peace and promoting development is a response to a Christian vision of the world and its purpose, which ultimately is to reach happiness with God, Vatican officials said at a conference.

Cardinal Gerhard Muller, prefect of the Congregation for the Doctrine of the Faith, and Cardinal Peter Turkson, prefect of the Dicastery for Promoting Integral Human Development, opened the conference marking the 50th anniversary of Blessed Paul VI's encyclical "Populorum Progressio," a social encyclical on development.

"It is in this world that we can perceive God's love for us," and it is in this world that men and women are called to learn to know, love and worship God and serve him and their brothers and sisters, Cardinal Muller said on April 3. Therefore, one cannot advocate for some kind of separation between concern for the things of God and concern for his creation, especially his human creation.

Lacking a faith dimension and focus on the transcendent purpose of human life, ideological and political notions of development will fail, even if they have some initial success, he said. Non-Christian visions of development include the "communist" idea of "creating heaven on earth," the "utilitarian" idea of seeking "the greatest level of happiness for the most people," the "Darwinian" or "imperialistic" notion of the survival and thriving of the strongest, and the "capitalistic" vision "with the exploitation of the world and labor."

"If we use these means, we are violating man's dignity," Cardinal Muller said. The Christian vision of development is that all men and women are called to collaborate with God in realizing God's kingdom. The concern is not simply for the "after life" or simply for earthly life, but recognizes that human life includes both.

"If we use these means, we are violating man's dignity," Cardinal Muller said.

Faith in God and responsibility for the world "are inseparably connected in Christ who came into the world not to liberate us from it, but to lead it back to the saving plan of God," he said. Christians are called "to mirror God's goodness and glorify God by doing his work."

The Christian call to work within the world, he said, means working to promote peace, to limit the weapons "that can destroy all humankind," to ensure science and technology are used for progress and not to harm human dignity, to oppose modern forms of slavery and to care for migrants and refugees.

"The church is not a lobby supporting its own interests," he said, but is a community of believers defending the dignity of men and women created by God.

Cardinal Turkson said the name of the Dicastery for Promoting Integral Human Development is drawn directly from the teaching of Blessed Paul in "Populorum Progressio," which insisted that the prevailing notion of development, particularly in reference to international efforts to help the world's poorer countries, was too narrow when it focused mainly on economics rather than on people.

Integral human development is focused "on the whole person and all people," recognizing them as the first agents of their own development and progress, he said. The Catholic Church's definition of progress is to pass from a condition of life that leaves human dignity vulnerable to one that strengthens human dignity.

"Love becomes the propulsive element then of development," he said. "Integral human development," by recognizing God's love and wanting to share it, shows concern for migrants and refugees, for the sick, for victims of war and for all those facing marginalization because of poverty or ethnicity.