If you’re so depressed you can’t get off the floor, how can you get into the confessional? 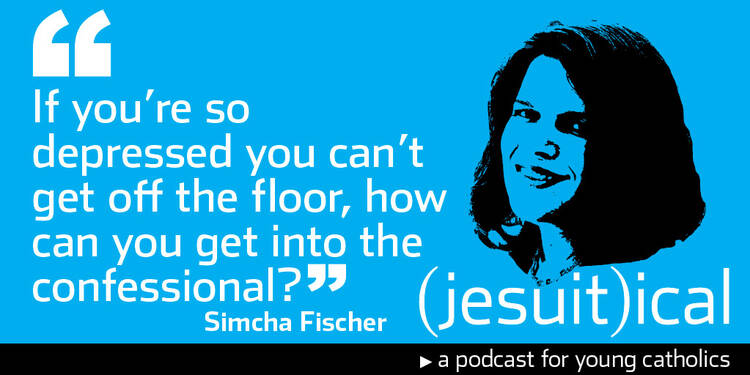 If you’re so depressed you can’t get off the floor, how can you get into the confessional?
00:00
Subscribe
Download

Talking about mental health isn’t easy. And when you throw faith into the mix it often becomes even harder. Many Catholics mistakenly think that needing mental health treatment amounts to a kind of spiritual failure. This week, we talk with writer Simcha Fisher, author of The Sinner’s Guide to Natural Family Planning, about how she learned to balance her Catholic faith and therapy.

Many Catholics mistakenly think that needing mental health treatment amounts to a kind of spiritual failure.

And in Signs of the Times, for our listeners who have been anxiously awaiting an update, the stolen relic of St. John Bosco has been found—inside a teapot! In papal news, Pope Francis urges parents to “stop pretending to be adolescents”; and he meets with NFL legends, including Curtis Martin, Ronnie Lott and Franco Harris. We also pause to talk about Britanny Hamama, a University of Michigan junior whose Iraqi-Christian father was detained by ICE agents while her family was preparing to attend Mass.

And finally, following the acquittal of Jeronimo Yanez in the 2016 killing of Philando Castile, Archbishop Bernard A. Hebda of St. Paul and Minneapolis calls for unity and urges “individuals and parish families to be promoters of authentic dialogue and encounter” during these times.

You can subscribe to Jesuitical on iTunes. While you’re there, please leave us a rating and review! Also, tell your friends, roommates, classmates, campus minister, eucharistic minister and your Twitter fam about Jesuitical.

I thought Good Catholics didn’t need therapy. Then I went.

Pope seeks “culture of encounter” during meeting with NFL legends

Deporting my Iraqi-Christian dad would be a death sentence. Why I’m praying for justice.