Father James Martin: L.G.B.T. Catholics have been treated like dirt. We can do better. 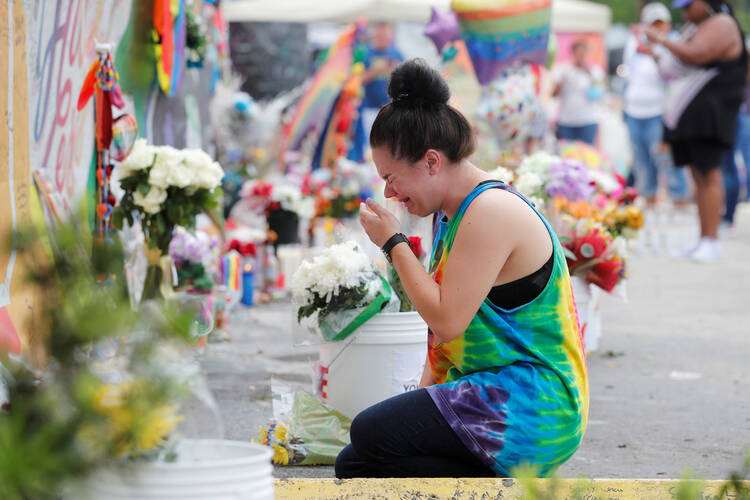 A woman cries while visiting the memorial outside the Pulse nightclub in Orlando, Fla., June 12, the one-year anniversary of the mass shooting. (CNS photo/Scott Audette, Reuters)
Father James Martin: L.G.B.T. Catholics have been treated like dirt. We can do better.
00:00
Subscribe
Download

One year ago, a gunman opened fire in Pulse, a gay nightclub in Orlando, Fla., killing 49 people in the deadliest mass shooting in modern U.S. history. This week, Father James Martin tells us why he was disappointed with how many church leaders spoke about the attack (very few uttered the word “gay”)—and what he’s doing to change the conversation within the church between the hierarchy and L.G.B.T. Catholics. (This being the prolific Jim Martin, there is a new book involved.)

Zac Davis is in China. Sad! But we have found a Jesuit Zach to take his seat. Zach with an H works in prisons and with the formally incarcerated in New York City, and we so enjoyed his company that we invited him to come back next week.

Father James Martin: “There are so many reasons why LGBT people feel marginalized and—frankly—are marginalized.”

In Signs of the Times: Who wore it better, Francis or JPII? According to the tailors and cobblers of Rome, Vatican fashion is changing under our humble Jesuit pope—and it’s hurting business. Zach makes the case for bringing back the papal lace. Next, Pope Francis: Venture Capitalist? Not quite, but the Vatican has given its blessing to the “Laudato Si’ Challenge,” a tech accelerator focused on finding start-up solutions to climate change. (At least someone read the pope’s encyclical.)

Next, you’ll never believe what Pope Francis said in his message for the first-ever World Day of the Poor! Actually, you can probably guess. But you should read it anyway.

Father James Martin: “We shouldn't have Catholics who don't feel welcome in their own parishes and who have to drive 50 miles to feel like they're not dirt.”

And finally, a new study looks at the partisan breakdown of clergy from various Jewish and Christian denominations. Catholic priests, likes Catholics overall, are basically a swing state. (Unfortunately, there was no Zac on hand to jump in a Great State of Ohio reference.) We discuss whether politics should be brought to the pulpit.

You can subscribe to Jesuitical on iTunes, and while you’re there, please leave us a rating and review! Also, tell your friends, roommates, classmates, campus minister, eucharistic minister and your Twitter fam about Jesuitical.

And, as always, we want to hear from you. Leave us a comment here, write us at jesuitical@americamedia.org or find us on Twitter @jesuiticalshow, @AshleyMcKinless, @OlgaMSegura and @zacdayvis.

Inside the Vatican-Blessed Tech Accelerator

Your Rabbi? Probably a Democrat. Your Baptist Pastor? Probably a Republican. Your Priest? Who Knows.

Building a Bridge: How the Catholic Church and the LGBT Community Can Enter into a Relationship of Respect, Compassion, and Sensitivity, by James Martin, S.J.