Bishops: Repealing Obamacare and gutting the safety net will hurt the poor 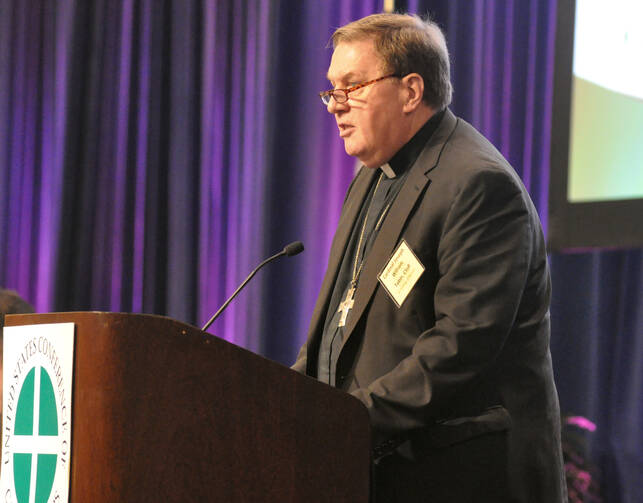 Click here for full coverage of the entire spring meeting.

A handful of bishops offered impassioned pleas for Catholics to take a stand against both a proposed federal budget that critics say guts the social safety net and efforts to replace the Affordable Care Act with a law that could strip health care from millions of poor Americans.

“Within two weeks we may see a federal budgetary action with potentially catastrophic effects on the lives of our people, most especially children and the elderly, the seriously ill, the immigrant and our nation’s working poor,” Bishop George Thomas of Helena, Mt., said on Thursday during an address at the spring meeting of the U.S. Conference of Catholic Bishops in Indianapolis.

“If left unchallenged or unmodified, this budget will destabilize our own Catholic health care apostolates, take food from the mouths of school-age children and the homebound, and deny already scarce medical resources from the nation’s neediest in every state across the land,” he continued.

The body of bishops applauded when Bishop Thomas finished speaking.

“The Affordable Care Act for all of its flaws was a movement in favor of comprehensive health care,” Bishop Robert McElroy said.

Meanwhile, Bishop Robert McElroy of San Diego said bishops must do more “to recognize the breathtaking nature of the assault on the core principle of Catholic social teaching” present in the proposed Republican health care bill, adding that “health care is a fundamental human right and government is its ultimate guarantor.”

“The Affordable Care Act for all of its flaws was a movement in favor of comprehensive health care,” he added. “[The American Health Care Act] is a movement away.”

Bishop McElory’s remarks were part of a debate about how American bishops should contribute to the ongoing debate about health care in the United States. Last month, the House of Representatives passed the A.H.C.A., which would repeal Obamacare and replace it with a law that would not mandate that Americans buy health insurance.

In the months leading up to that vote, Bishop Frank Dewane of Venice, Fla., head of the bishops committee on domestic justice, released several statements criticizing components of the measure. The Senate is now considering its own bill.

Bishop McElroy said the Republican-sponsored plan, which he said is being crafted “in stealth and darkness,” is designed in a way that “will deliberately fall apart in the coming years from market forces and ever smaller amounts of government revenue.”

Senate Republicans have been accused of keeping the contents of their health bill secret. Earlier this week, President Trump called its contents “mean” and suggested lawmakers do more to ensure Americans do not lose access to insurance. Mr. Trump celebrated the passage of the House bill with a White House ceremony last month.

Bishop McElroy said he supported his fellow bishops efforts to ensure that any new law prohibit the use of federal money for abortion, but he said an equally important consideration should be how many Americans lose coverage under any new law.

He said that “if the number of people who will be...realistically covered by quality health care by whatever emerges is diminished, then our conference should automatically oppose that legislation and categorically do so.”

Cardinal Blase Cupich said Catholics should highlight that the health law repeal is tied to hundreds of billions of dollars worth of tax cuts.

Cardinal Blase Cupich of Chicago, meanwhile, asked Bishop Dewane if his committee could enlist the help of Catholic sisters, who, he said, “have the institutional knowledge and the credibility of our people” when it comes to health care. The Catholic Health Association, led by Sister Carol Keehan, has been vocal in its opposition to repealing Obamacare.

Cardinal Cupich also said Catholics should highlight that the health law repeal is tied to hundreds of billions of dollars worth of tax cuts and urge lawmakers to separate health care from tax cuts.

“I think we talk about uncoupling those two issues,” he said.

While many bishops have spoken against many of the changes proposed by Republicans in recent months, not all appear to be critical of the A.C.H.A.

Archbishop Joseph Naumann of Kansas City, Kan., expressed disappointment with the Affordable Care Act, suggesting that it placed too much of a financial burden on states. He said the new debate is “an opportunity for us to do something different from perhaps other parts of the world and really to develop quality health care accessible to all, but not just follow the models of other parts of the world that I don’t think are really serving people well.”

Bishop Thomas, the first bishop to speak when the floor opened, urged unity from his fellow bishops.

“As a conference of bishops we have the responsibility to read the signs of the times, shine the light of the Gospel and the principles of Catholic social doctrine on this proposed budget,” he said. “Our silence or our indifference would be tantamount to complicity in a very bad budget if we turn our faces away from our people in their hour of greatest need.”

The bishops need to make up their minds, as more than a few traded social justice and serving poor Americans to kowtow to wealthy, conservative Catholic donors. And being Pro-Life is much, much more than just being anti-abortion—as a starving child is just as important as an unborn baby. Ignoring all of the millions of poor people helped by ACA and other social programs being slashed to give tax breaks to people who don't need them demands that bishops and greedier Catholics do a serious examination of conscience. Rationalizing that after wealthier Americans buy themselves more toys rather than fund meals for hungry children, plus housing and other basic survival subsidies for low-income families. Just wait for the ax to drop on Medicare, Medicaid and Social Security. Maybe after those gaining sinful tax advantages buy their 2nd or 3rd houses, a big boat, a few luxury trips, a collector car here and there, some of that stolen bread money for the less fortunate will trickle down. Good luck squeezing through the "eye of the needle" and more than a few should be squirming every time they hear the "Sermon on the Mount".

No.
Wearing a Bishop's miter and carrying a staff does not make one wise or rife with understanding for all. Obamacare DOES NOT WORK. It is a move on a part of Obama, who might have been a great president, but assumed the mantle of responsiblily tooo early. He did not have the testing, the trial, the tenure to make a good President. He was owned by the Investment Bankers.