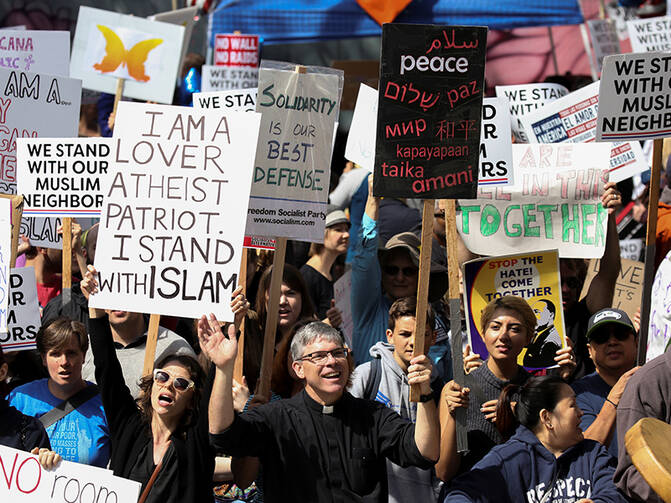 If Muslims have their way, said the man with the megaphone, there will be no justice for America’s goats.

“Why do Muslims rape their goats so much?” Jim Gilles asked his fellow protesters gathered on Saturday, June 10 outside one of the largest Islamic worship centers in the Dallas area. “It’s because they’re perverted, demonic, sex-crazed … sick perverts.”

Such outlandish statements appeared to seem completely plausible to many of the 200 or so participants of the rally held outside the Islamic Association of North Texas in the suburb of Richardson.

The demonstration was one of about two dozen “Marches against Shariah” organized Saturday in cities across the country by ACT for America, a self-styled grass-roots national security organization.

The Southern Poverty Law Center, which tracks extremist groups including neo-Nazis, Ku Klux Klansmen and black separatists, considers it to be a hate group. The SPLC says that since ACT for America’s founding 10 years ago, it “has grown to become the largest grassroots anti-Muslim group” in the country, with 1,000 local chapters and a claimed membership of 280,000.

There were also anti-Sharia rallies in major cities such as Boston, Chicago, Denver and Seattle. In some places, the protests were met by counter-demonstrations, and in some cases there were scuffles between two sides. In Manhattan, the counter rally was significantly larger, the New York Daily News reported.

There was a smaller number of counterprotesters in Richardson, many of whom have friends who worship at the Islamic center. Some in the anti-Shariah crowd wore desert fatigues and carried military-style handguns or rifles. The rhetoric was often rancorous, and tempers seemed to rise with the searing North Texas heat, but a robust contingent of Richardson police officers kept the peace by keeping the two groups separated.

In some places, the protests were met by counter-demonstrations, and in some cases there were scuffles between two sides.

ACT for America—the first three letters stand for American Congress for Truth—says its mission is “to protect America from terrorism” and safeguard “the Western values upon which our nation was built.”

Among its initiatives has been to push for passage of state statutes and constitutional amendments—known collectively as “American Laws for American Courts” measures—that would prohibit courts from deciding cases by applying Shariah, a body of Islamic laws and practices derived from the Quran and the traditions of the Prophet Muhammad.

Headquartered in Virginia Beach, Va., ACT for America was founded in 2007 by Brigitte Gabriel, a Maronite Christian who was born in Lebanon.

The group steadfastly denies being anti-Muslim. The enemy isn’t Islam, its website says. The enemy is “radical Islam,” which seeks “to destroy our Western way of life.”

But Gabriel, in her writings, in interviews with right-wing publications, and in other public pronouncements, has often blurred any line between “good” and “bad” Islam—as did many of her followers in Richardson. (Gilles, for example, carried a large placard that said, “Every real Muslim is a Jihadist!”)

“Islamic terrorists … are really just very devout followers of Muhammad,” she wrote in 2006. “They are following his example and doing exactly what the Koran teaches.”

In a 2007 lecture at the Defense Department’s Joint Forces Staff College in Norfolk, Va., she said that a devout Muslim “cannot be a loyal citizen to the United States of America.” In the same lecture, she was reported to have said Muslims shouldn’t be allowed to hold public office.

Saturday’s demonstrations, scheduled during Islam’s holy month of Ramadan, were denounced by more than 100 religious, community and civil-liberties organizations across the country, including Amnesty International USA, the Anti-Defamation League, the Presbyterian Church (USA), the United Methodist Church, the Sikh Coalition, the American Friends Service Committee, the Council on American-Islamic Relations, and the National Council of La Raza.

In a letter to the mayors of host cities, the groups said the demonstrations were “intended to manufacture fear of Muslims” by “disingenuously” raising concerns about Shariah taking root in American courts.

“We are deeply concerned about the type of message that these protests send to the American public and to the good people in your city—that it is acceptable to vilify people simply because of their faith,” the letter said.

Khalid Hamideh, the lawyer and spokesman for the Richardson Islamic center, said “it is absolute nonsense” to suggest that Muslims are plotting to set up religious courts in America, substituting the judgment of Shariah for, say, the Bill of Rights or the Kansas Motor Vehicle Code.

Shpendim Nadzaku, the center’s imam and resident scholar, said of the protests, “They are anti-Mulsim. Let’s just call a spade a spade.”

However improbable the establishment of Shariah law in America may be, ACT for America and allied groups have attracted broad populist support by vowing to stamp out the threat.

In 2015, Beth Van Duyne, the mayor of Irving, Texas, was cheered by tea party Republicans nationwide for fighting to stop a court in her city from imposing Shariah law.

As it turned out, there was no such court—Van Duyne heard about it through a chain-letter rumor, which proved to be false. But that didn’t stop her from pushing for passage of an American Laws for American Courts bill in the Texas Legislature. Muslims, she warned, were intent on “bypassing Texas courts, bypassing American courts.”

This spring, after Van Duyne opted not to seek a third term as Irving’s mayor, President Donald Trump selected her as a regional administrator of the U.S. Department of Housing and Urban Development, overseeing federal housing programs in Texas and four surrounding states.

Gosh, next some will want to apply Church Canon Law to our courts.

Demonstrations against the specter of Shariah in America are cover for anti-Muslim action, which is despicable.
But, what is the author's angle? Consider, for example, what the author may intend by this statement:
"Gabriel, in her writings, in interviews with right-wing publications, and in other public pronouncements, has often blurred any line between 'good' and 'bad' Islam—as did many of her followers in Richardson. (Gilles, for example, carried a large placard that said, 'Every real Muslim is a Jihadist!')"
1. Why the sneer-quotes around "good" and "bad"? Does the author want to imply that there is no such thing as good Islam or no such thing as bad Islam? If so, the author wants to imply that there is within Islam no line to be blurred; so, the author should not find any such pronouncements of Gabriel to be objectionable.
2. How does the statement on the placard that Gilles carried blur a line dividing Islam? I have not met anyone professing to be a real Muslim who denies being, thereby, a jihadist whose struggle is both personal and social and political. However, all of the self-professed Muslims I know deny being violent jihadists. Does the author believe that Gilles's statement blurs this distinction between nonviolent jihadists and violent jihadists?

No Sharia
4 years 7 months ago

Sharia has no place in civilized circles. Willful ignorance has proven deadly for 1400 years.
JP2 had it right. Francis is not helping.
If more people would be honest, and call out hate speech and actions for what it is, we would all be members of ACT for America.

But a good piece nevertheless.

An odd choice of picture to run with this article - a bit misleading until one reads the caption.
At first glance my reaction was "Why would a Catholic priest be actively involved in such a demonstration?"