In the shadow of St. Peter’s, a Mormon temple rises in Italy 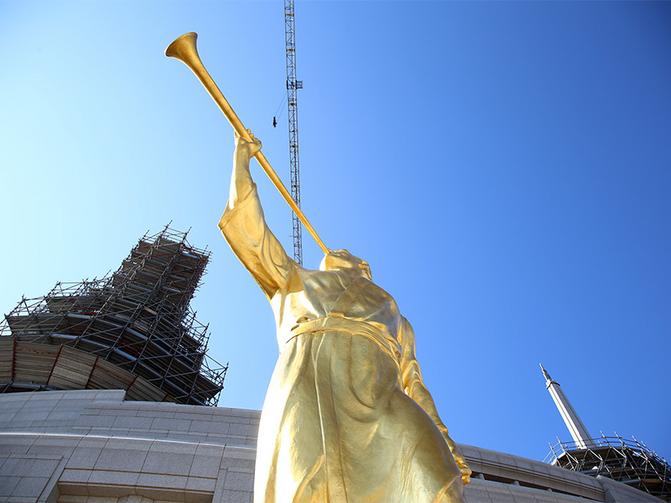 A gold-leaf statue depicting the ancient Mormon prophet, Moroni, is prepared for placement on one of the spires of the new Mormon temple in Rome on March 25, 2017. Photo courtesy of Claudio Falanga/Intellectual Reserve Inc.

In a tiny chapel just a few miles from the Vatican, 40 young men and women have put on their best clothes and gathered to worship Jesus.

But in a country where nearly 90 percent of people consider themselves Catholic, these young Italian worshippers are not; they’re Mormons, and they are adding to the religious mix.

Mormons in Rome say they encounter no prejudice—simply curiosity from their friends.

“This is something I love. I don’t see it as a sacrifice,” says Michela Banchini, a 22-year-old university student. “We have a different way of living our lives.”

The Church of Jesus Christ of Latter-day Saints has an estimated 26,000 members in Italy, with the biggest missions based in Milan and Rome.  The church’s outreach is extensive, with more than 100 congregations reaching as far as the Swiss border in the north and to Sardinia and Sicily in the south. Church leaders say the faithful are represented in almost every major city.

Mormons in Rome say they encounter no prejudice—simply curiosity from their friends.

Despite the predominance of the Catholic Church, particularly in Rome, Mormons are looking to the future with the imminent opening of a new temple and visitors center that church elders hope will draw more converts.

“There’s a lot of excitement right now because of the new temple,” says Alessandro Dini Ciacci, the church’s representative in Italy. “There are a lot of requests for information and many are deciding to join the church.”

The 40,000-square-foot temple with two spires is being constructed northeast of central Rome just inside the beltway that encircles the Italian capital.

It will be the centerpiece of a 15-acre complex that includes a family history center, a visitors welcome center and lodging for pilgrims traveling from out of town.

The site gained worldwide attention in March when a gold-leaf statue depicting the ancient Mormon prophet, Moroni, was placed atop one of the two spires.

The site gained worldwide attention in March when a gold-leaf statue depicting the ancient Mormon prophet, Moroni, was placed atop one of the two spires.

The statue weighs 450 pounds and when a crane lifted it to the top of the temple it signified its presence while an official opening is still a few months away.

Church officials say the best construction materials, including Italian granite, were used in building the complex, which has been financed by tithes from around the world.

The visitors center will also house marble replicas of Danish sculptor Bertel Thorvaldsen’s busts of Jesus and the Apostles. The internationally known 19th-century sculptor spent most of his life in Italy.

The Rome temple will give Mormons a long-awaited spiritual home where they can come together to worship in Italy for the first time.

“Building a temple in Rome is a major sign of growth of the church in Italy and members are looking forward to that,” said Dini Ciacci, a 39-year-old father of four.

“Right now Italians go to the temple in Bern (in Switzerland) for baptisms and marriages, and it’s quite a trip.”

The LDS has donated a mobile kitchen to the Italian Red Cross to help refugees and earthquake survivors in central Italy and a mobile clinic that works with the homeless. The church is also expanding elsewhere in Europe.

“We just dedicated our 12th temple in Europe in Paris in April and another is under construction in Portugal,” said Dini Ciacci.

Dini Ciacci hopes the Rome temple will attract a lot of new interest from members while attracting newcomers despite the commitment required by the LDS.

“We require a lot from our members,” he said. “We expect them to be in church for three hours every Sunday and to give 10 percent of their income to the church.

“We expect them not to drink or smoke, to abstain from sexual relations before marriage and to live a healthy life. I think it’s a miracle that so many people are willing to abide by these rules.”

A surprising number of Italian Mormons grew up with parents or grandparents who embraced the faith years ago.  Many have also served as missionaries assigned to nations across the globe.

But a growing number, like Claudia Mencarelli, a linguistics student in Rome, are recent converts. Mencarelli surprised her Catholic parents when she converted while she was a 16-year-old high school exchange student in Utah.

“After the initial shock they could see how beneficial the church was,” the 23-year-old said.  “I feel such a great peace and joy from the gospel. I would not trade it for anything.”