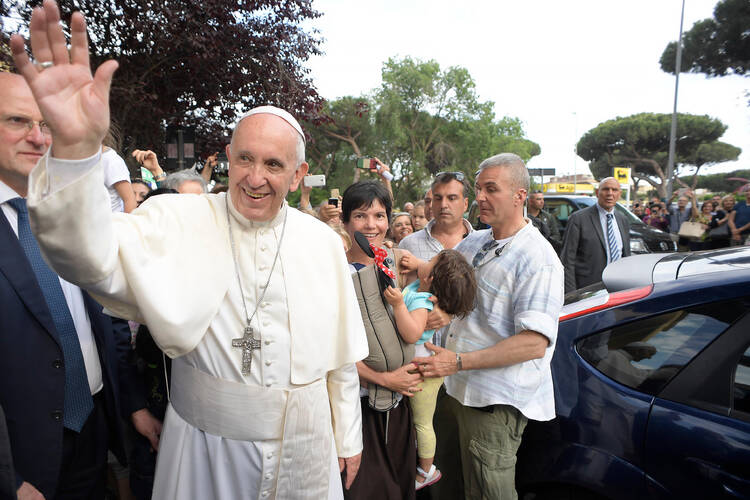 Pope Francis waves during a visit to give an Easter blessing to homes in a public housing complex in Ostia, a Rome suburb on the Mediterranean Sea, May 19 (CNS photo/L'Osservatore Romano).

President Donald J. Trump and Pope Francis are scheduled to meet for the first time at 8:30 a.m., Rome time, on Wednesday, May 24. Vatican officials contacted by America, who spoke on condition of anonymity, consider the meeting of the utmost importance given the role of the United States in the world. They expressed happiness that the leader of the globe’s main superpower decided to visit the pope on his first foreign trip, and they seemed quietly confident that the meeting will go well.

“It will be good. It’s going to be their first encounter, and the hope is that it will start a good relationship, open a channel of communication between the two sides, and send a message to the Catholic Church in the United States,” a senior Vatican official told America.

After the traditional handshake and photo-op, the pope will escort the president into his private library and the two leaders will then sit facing each other across the table where Francis has spoken with many of the world’s leaders over these past four years, including U.S. President Barack Obama on March 27, 2014.

“Much can happen when the pope and the president are together in private,” a close associate of the pontiff told America. He dismissed the notion that it would be a contentious encounter. “Francis will have prayed earnestly for God’s guidance before meeting the President. The Holy Spirit will help him,” that same source stated.

Nobody America spoke to thought it would in any way resemble the encounter suggested by a Jeff Danziger cartoon that depicts President Trump telling Francis, “It’s a deal. You take care of the poor and I will take care of the rich.”

The private conversation between the pope and the president, with the aid of translators, is expected to last somewhere between 30 minutes and one hour. (President Obama’s private talk with Francis lasted 52 minutes.) “It is a short time to get to know each other, but a lot of it is chemistry,” according to a Vatican source who knows well how such audiences go.

Pope Francis has a gift that assists him greatly whenever he meets a person for the first time: a profound perception Father Angel Rossi, an Argentine Jesuit who knows him well, called “cardiognosis: the gift of knowing people’s hearts.” Father Rossi described it as “an intuitive intelligence” because “with very little information, he knows you...and you cannot hide things from him.” When he meets someone for the first time, Francis observes closely, listens attentively and seeks to go beyond what the person says to grasp what is in his or her heart.

“Francis is the most gracious person I have ever met,” a senior European diplomat told me recently. He and other sources concur that the Argentine pope will be extremely gracious with President Trump, will encourage him to speak freely, and will listen attentively to all he has to say and, while doing so, will be on the lookout for openings that can lead to common ground.

On the eve of his visit, President Trump nominated Callista Gingrich, wife of former House Speaker Newt Gingrich, to be the new U.S. ambassador to the Holy See.

The media in the United States reports that when he comes to the Vatican, Mr. Trump wants to talk about human trafficking and religious liberty. President Obama had those same topics on his agenda when he first met Francis, but we now know that they went far beyond them to discuss other very important issues, including the possibility of a U.S.-Cuba rapprochement. Something similar could happen this time.

The U.S. president decided to begin his nine-day first foreign trip with visits to religious centers of Islam (Saudi Arabia), Judaism (Israel) and Christianity (the Vatican), and will conclude it by going to the European Union headquarters in Brussels and the G7 meeting in Taormina, Italy.

Mr. Trump’s arrival at the Vatican will happen directly after his private talks with Israeli Prime Minister Benjamin Netanyahu and Palestinian President Mahmoud Abbas. He is meeting with both leaders in Jerusalem and Bethlehem, respectively, to discuss finding a lasting peace solution to the Israel-Palestine conflict. It seems highly likely that this issue will be the starting point for his conversations with the pope and senior Vatican officials who have long been desirous to reach that same goal.

Another probable point for discussion is the question of combating and overcoming terrorism, particularly after the president’s moderate speech to leaders from 55 Muslim-majority countries in Riyadh on May 21. During this speech, he emphasized that the United States is not at war with Islam, describing it as “one of the world’s great faiths.” He also took the side of the Saudis and others against Iran, while at the same time calling on the religious leaders present at the meeting to join “in the battle between evil and good” and increase their efforts “to drive out” extremists from their midst.

In addition to these crucial matters, sources expect Pope Francis and senior Vatican officials to discuss with the president questions on world peace, migration, climate change and the protection of the environment. The crises in Syria and Venezuela are also likely to appear on the agenda.

President Trump will be accompanied by a sizable delegation when he visits the Vatican and while the full list of names has not yet been disclosed, sources say it will include his wife, Melania; his daughter Ivanka with her husband Jared Kushner; the national security advisor, Lt. Gen. H.R. McMaster; and Secretary of State Rex W. Tillerson. Francis will greet them individually after his private conversation with the president has ended, and before the traditional exchange of gifts.

After bidding farewell to the pope, President Trump, accompanied by some of his top advisors, will be escorted for private talks with two of Francis’ chief advisors: the secretary of state, Cardinal Pietro Parolin, and the secretary for relations with states, Archbishop Paul Gallagher.

Pope Francis and Donald Trump to meet. Here’s what you need to know.
Michael J. O’Loughlin

Pope says he will not pre-judge Trump, will seek common ground.
Gerard O’Connell

The first lady, on the other hand, will visit the Bambino Gesù, the largest pediatric hospital and research center in Europe, which is supported by the Vatican and often referred to as “the pope’s hospital.” Ivanka Trump will visit the Sant’Egidio lay community to participate in a discussion on human trafficking.

The Vatican has gone out of its way to accommodate President Trump by arranging for him, at very short notice, to have a private audience with the pope at 8:30 on a Wednesday morning. Normally, Francis holds a public audience in St. Peter’s Square at 10:00 a.m. every Wednesday; before that, at 9:30 a.m., he drives among the faithful in the square. This time, however, the Vatican has announced that the public audience will begin a half-hour later, at 10:30 a.m. That is two hours after Trump arrives in the Vatican, thus allowing plenty of time for his conversations with the pope and his top advisors.

Given that there are normally tens of thousands of pilgrims in St. Peter’s Square for the Wednesday public audience, the Vatican and the U.S. organizers of the visit have agreed that President Trump will not enter the Vatican city-state under the Arch of the Bells that is on the left hand side of St. Peter’s Square. Instead his motorcade will pass through the Porta del Perugino, near the Domus Santa Marta where Francis resides, and drive behind St. Peter’s Basilica to the Cortile di San Damaso, where he will be saluted by a platoon of Swiss Guards and then escorted to the Second Loggia of the Apostolic Palace for his audience with the pope.

This is so interesting. I am especially intrigued with Ivanka Trump's visit to the Sant'Edigio community. Who knows what is in the air?

Would really appreciate an article on the background of the Sant'Edigio community. Thank you.