Pope Francis and Donald Trump to meet. Here’s what you need to know. 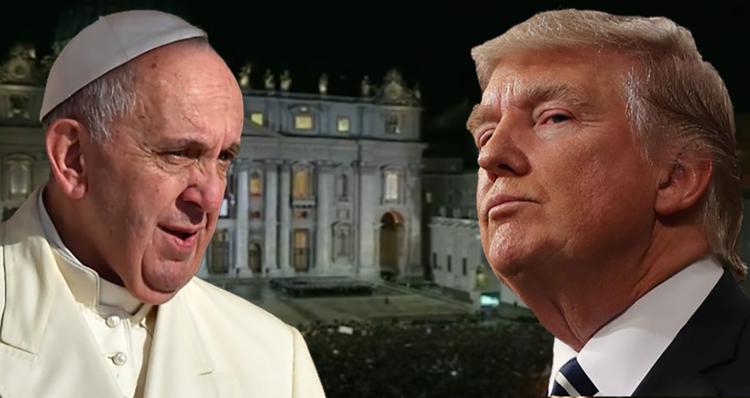 President Trump departed Friday for his first overseas trip, which the White House says in intended to highlight the need for unity among Muslims, Jews and Christians. It includes stops in Saudi Arabia, Israel and the Vatican, where Mr. Trump will meet with Pope Francis and other church leaders on May 24. Here is what you need to know about the first meeting between the president and the pope.

1. Do not expect fireworks

Though they have not met, Mr. Trump and Pope Francis have something of a history—and it is not exactly warm. Mr. Trump’s proposal to build a wall along the U.S.-Mexico border, which he championed as recently as May 18, has alarmed U.S. Catholic leaders. Last year, Pope Francis weighed in generically about walls, saying politicians who seek to build them are not Christian. Mr. Trump called the comments disgraceful; the Vatican clarified that the pope was speaking only in generalities and Mr. Trump said he forgave the pope.

It is not just walls. The pope is also a strong advocate for refugees, whereas Mr. Trump has reduced the number of refugees the United States will settle. Pope Francis frequently speaks and writes about the need to protect the environment, whereas Mr. Trump has been skeptical of climate change and says environmental protections cannot come at the expense of economic interests.

The pope said recently that he will reserve judgment on Mr. Trump until after they speak.

Still, do not expect fireworks. After all, the meeting will be relatively brief, probably just under an hour, and Mr. Trump and Pope Francis are both charismatic leaders who will surely use the opportunity to focus on shared interests.

The White House said earlier this month that the president plans to discuss efforts to combat human trafficking and anti-Christian persecution in the Middle East, both also priorities of the pope.

For his part, the pope said recently that he will reserve judgment on Mr. Trump until after they speak.

2. Trump will go into the meeting having recently met with two Catholic cardinals.

There have been concerns that the Trump administration has not staffed key positions dealing with religious outreach, but Mr. Trump is not going into Wednesday’s meeting unprepared.

Cardinal Donald Wuerl of Washington, who holds a seat on the Vatican’s powerful congregation for bishops, was at the White House earlier this month, along with the head of the U.S. Conference of Catholic Bishops, Cardinal Daniel DiNardo, for an event marking the National Day of Prayer. They met privately with Mr. Trump in the Oval Office for several minutes before the presidentsigned an executive order related to religious liberty.

Additionally, Vice President Mike Pence hosted Carl Anderson, head of the Knights of Columbus,in his White House office earlier this month. The Knights have spent millions of dollars supporting beleaguered Christians in the Middle East and it is possible Mr. Anderson used the meeting to make the case for greater support from the administration. (Coincidentally, Mr. Pence and one of the pope’s advisers, Cardinal Kevin Farrell, will be together Sunday, bothreceiving honorary degrees from the University of Notre Dame.)

3. On one hand, this is just another meeting with a world leader for the pope…

Mr. Trump is a relative newcomer to international politics, so he is still unfamiliar with many of the world’s leaders. Pope Francis, however, has held dozens of meetings with global leaders during his four-year pontificate, including a 50-minutemeeting with Russian President Vladimir Putin in 2015. The pope will not be star struck or intimidated by Mr. Trump, and he has a firm grasp of the geo-political challenges facing the world, one that is not America-centric. With a Catholic network spanning the globe, the Vatican can be an invaluable resource for any world leader, but only time will tell if Mr. Trump is interested in listening to what the pope has to say.

4. …on the other, Mr. Trump is still president of the world’s only superpower.

While it is true that the pope does not begin his day wondering what is happening in the United States, a meeting with the head of the world’s lone superpower is still a momentous occasion. In addition to his meeting with the pope, Mr. Trump will also meet with the Vatican’s secretary of state, Cardinal Pietro Parolin. This meeting is where some of the more concrete items will be discussed, including how the United States and the Vatican might work together on shared concerns. (Cardinal Parolin made headlines in February when he expressed concern about the rise of global populism and warned that the “inability to welcome and integrate can be dangerous” to societies.) The Vatican was instrumental in the thawing between the United States and Cuba that culminated in the two countries reestablishing diplomatic ties. If the Vatican wants to impact other geopolitical challenges, working with the United States would be a sure way to gain outsized influence.

5. The real strength of U.S.-Vatican relations will be forged by Trump’s ambassador to the Holy See.

UPDATE: On May 19, the Trump administration officially announced the nomination of Mrs. Gingrich as ambassador to the Vatican.

No matter how the meeting goes, there remains a missing puzzle piece in U.S.-Vatican relations: Who will represent Mr. Trump at the Holy See? The New York Times, the Associated Press and CNN all reported that the administration has chosen Callista Gingrich, a Catholic filmmaker and wife of former Speaker of the House Newt Gingrich. The couple enjoys access to Mr. Trump, so should Mrs. Gingrich be nominated and confirmed, she could prove to be a valuable asset to the White House should it desire to collaborate with the Vatican. Until then, it is unclear if this meeting will result in any tangible results.

6. The pair will likely exchange gifts.

No, this is not a vitally important aspect to the trip, but it is a fun part to any meeting between a pope and a president. When President Obama met with Pope Francis at the Vatican in 2014,he gave the pope a chest made from wood from the nation’s first Catholic cathedral that contained seeds from vegetables grown in the White House garden. Francis gave Mr. Obama papal medallions and a copy of “The Joy of the Gospel,” his apostolic exhortation published in 2013.

Neither the White House nor the Vatican would offer any clues about what gifts the pair plans to exchange next week. But if Pope Francis offers Mr. Trump a copy of “Laudato Si’,” his encyclical about the need to protect the planet, it will be a milestone in papal diplomacy—or papal trolling.

7. The trip will be overshadowed by Trump’s visits to Saudi Arabia and Israel—plus that special prosecutor.

For the relatively small segment of the population who obsess over U.S. and Vatican politics, a meeting between a pope and a president is akin to a Superbowl, bringing into the mainstream conversation topics usually relegated to niche publications.

Normally, a meeting between Mr. Trump and Pope Francis would be a big part of any news cycle. But this particular meeting comes after two other stops that are arguably more high-stakes than his Vatican stop—and the entire trip is set against the backdrop of a mounting domestic crisis for the president that will not abate just because he is overseas.

Pope says he will not pre-judge Trump, will seek common ground.
Gerard O’Connell

Mr. Trump begins his trip in Saudi Arabia, where he will give an address to Islamic leaders. Then, he makes his way to Israel, where he will meet with political leaders and pray at the Western Wall. (He will also visit the the Church of the Holy Sepulchre, which Christians believe sits on site where Jesus was crucified, buried and rose from the dead.) From there, he heads to the Vatican, before a visit to Brussels and then ending the visit in Sicily for the G-7 meeting.

The first two stops carry greater political rewards for Mr. Trump, and if the White House press briefings leading up to Friday’s departure are any indication of what the media will focus on during the trip, it is likely that his meeting with the pope will be but a blip on the radar.

Then again, Mr. Trump is a master manipulator of media, and Pope Francis remains a global superstar. So if the president sees in his meeting with Pope Francis a possibility of diverting attention away from his challenges at home, or unforeseen setbacks at the start of his trip, expect a tweet or two from Mr. Trump that could extend the media shelf life of his first papal meeting.

Here's my summary of this article. Two men are meeting at the Vatican this week. I have great respect for one of the men, disdain for the other. Keep in mind the statement "by their deeds will you know them" and apply as you wish to both men. I'll never understand why my church supports a person like Trump.

"Here's what you need to know"

We weary of the press insulting us with such condescending bait/click headlines.
Just the facts, sir. We are more than capable to think for ourselves.

Note to Fr James Martin: Please stop manipulating readers with bait/click headlines for the purposes of generating web traffic in order to drive advertising revenue, aka capitalism. It is demeaning and treats us as widgets /idiots

Why criticize Fr. Jim? I doubt he has the time to create the headlines. Please be charitable and consider sending these comments in a private email to the editors. (Matthew 18:15)