Pope says he will not pre-judge Trump, will seek common ground. 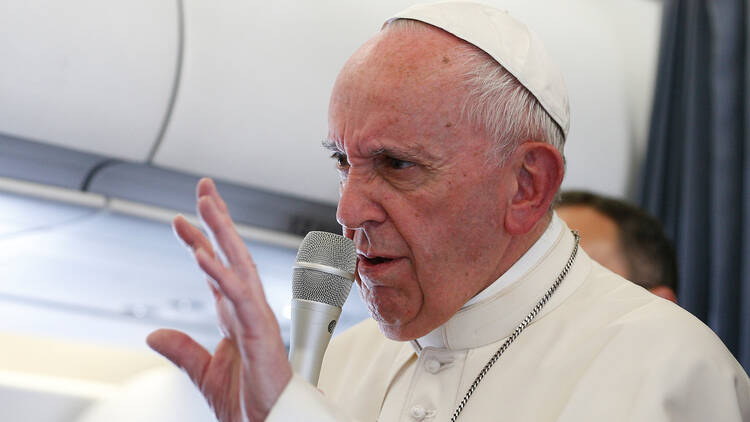 “I never judge someone without listening to him,” Pope Francis said tonight when asked about the policies of U.S. president Donald J. Trump that are diametrically opposed to his own views on the questions of building walls, welcoming immigrants and tackling climate change, and what he expects from the meeting with Mr. Trump on May 24.

In a press conference that lasted more than 30 minutes on the return from Fatima to Rome, a relaxed Pope Francis responded to all 10 questions presented to him, including one relating to the resignation of abuse-survivor Marie Collins from the Pontifical Commission for the Protection of Minors, and others relating to Medjugorie, Fatima and the future of the dialogue with the Lutherans.

As for what he expects from his meeting with the U.S. president, Francis responded that “there are always doors that are not completely shut. We need to find the doors that are at least slightly open, get in [there], talk about things [we have] in common, and carry on, step by step.”

He said that friendship and mutual esteem are “artisanal” and “are built day by day, with respect for one another.” He added, “One thinks one way, the other [another way], but one should be honest with what one thinks.”

Asked whether he hoped that President Trump would change his policies on matters such as immigration after their meeting, Francis replied: “That is a political calculus I cannot afford to make. Even on the religious level, I am not one who proselytizes.”

Speaking about Marie Collins’s resignation from the papal commission, Francis began by praising her as “a good woman, a brave woman” who had “explained everything” to him. He said she had “made accusations which have some reason” because “there are many cases” and there is “a delay in dealing [with them].” He explained that some of the problems have to do with “legislation” at the diocesan level, but much progress has been made there. Another problem is that “there are few people” in the Congregation for the Doctrine of the Faith to deal with the outstanding cases—around 2,000. “We need more people,” the pope said, and two or three have already been added. He said that the head of the section for discipline has been changed and replaced by “a good, efficient, fine person,” Father John Joseph Kennedy.

He said another problem is that bishops sometimes send dossiers on abuse cases to the Congregation for the Doctrine of the Faith that are incomplete and have to be sent back to be properly done. He revealed that the possibility of having continental tribunals (such as in Latin America) to enable the local churches to deal with abuse cases in a more effective way.

Furthermore, he said, there are situations where an accused priest lodges an appeal after a negative judgment has been made against him. Francis said he has a right to such an appeal and to have a lawyer to assist him; to ensure that accused priests are given fair trials. Francis said, he has set up a second tribunal to hear the appeals. He explained that this second tribunal is separate from the ones that first judged accused priests and said that he has appointed as its president Archbishop Charles Scicluna, whom he described “an indisputable authority in combatting abuse.”

Reports have circulated in the media and other circles in recent months claiming that Pope Francis is “soft” toward some priest who have been judged guilty of sexual abuse by competent church tribunals. Some have alleged that he reversed judgments against such priests. Francis tonight left no doubt on this important question, emphasizing, “I have never signed a pardon.”

These are rough translations by the author, including rapid summaries that are subject to revision once an official text is made available by the Vatican.