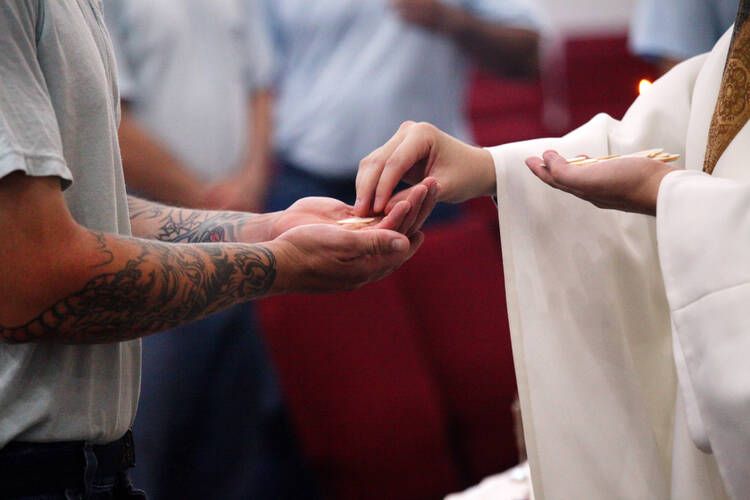 If you had to brainstorm settings in which you might want to make sure there were a chaplain available, should you need one, three places stand out: hospitals, nursing or veterans’ homes and prisons.

It is that last location that generally gets shortest shrift. Let’s be frank: Our stance in the United States toward those who have been convicted of a crime—and usually those accused, too—is often punitive. Whether they are a repeat offender on a minor drug charge or they have committed a far more serious offense, people convicted of crime are understood to have abnegated their rights to everything from freedom to personal safety. (Think about how often in U.S. culture male-on-male sexual assault is depicted as an accepted, even humorous part of incarcerated life.) On the hierarchy of demands in most prison systems, pastoral care scores low.

The state of California—second highest in the country in number of people incarcerated—does better than most other states, providing at least one salaried position for a Catholic chaplain in each of the state’s 36 facilities (which currently house over 90,000 inmates), as well as for the state’s hospitals, veterans’ homes and developmental centers.

Given the number of those in the California legal system today who are Latino, “you can guess a large percentage of them are Catholic.”

But that statistic is somewhat misleading. It ignores almost half of the state’s incarcerated. In 2011 the state loosened parameters regarding where people convicted of crime can be sent to serve their time as a part of an effort to decrease state prison overcrowding. Instead of housing only inmates with terms of one year or less, now each of the state’s 90 county jails can house almost anyone convicted of nonviolent or nonsexual offenses, no matter how long their sentence.

Today jails in the state hold some 81,000 inmates. Yet unlike state prisons, these facilities generally do not maintain paid positions for chaplains. Debbie McDermott, associate director for Restorative Justice at the California Catholic Conference, says that given the number of those in the state legal system today who are Latino, “you can guess a large percentage of them are Catholic.”

And even at state facilities, funds are rarely if ever budgeted for the everyday needs of a chaplain’s work. Whether that is for photocopies or Mass stipends, most chaplains depend almost entirely upon the donations of others.

Will Hawaii prove a sanctuary for undocumented people?
Jim McDermott

Archbishop Gomez: We are the answer that God provides to those who suffer
Jim McDermott

So at Los Padrinos Juvenile Detention Center in the Los Angeles County community of Downey, Sister Teresa Doherty, R.S.C., and her team of 120 volunteers provide Sunday Mass, Bible study, confessions, pastoral visits and sacramental preparation each week. Normal Mass attendance is 95 people (over a third of Los Padrinos’ total population). In addition, Sister Doherty writes letters of support to judges for any inmate who asks and organizes things like gift bags at Christmas, Bibles and missalettes.

She estimates her yearly costs total $10,000, not including her living expenses, which are provided by her order. And every penny of that has to be raised. Most comes from the generosity of one priest and his parish. If it were not for them, she says, “I’d be in a very sorry state. I wouldn’t be able to manage.

As a result of a recent court decision, chaplains are now not even allowed to bank the donations they receive with their wardens, leaving many scrambling to figure out what to do. Last week the California Catholic Conference opened a fund-raising portal just for jail and prison chaplains. People wishing to support a specific jail chaplaincy or the ministry more generally can go to a link on the conference’s restorative justice website and donate via PayPal. The conference will store the money for the chaplains.

The move had an unexpected immediate impact. The conference first publicly mentioned the site in its weekly newsletter on May 12, says Ms. McDermott, and “on Monday we had a donation of a $1,000.”

“So many people are touched by what happens in the criminal justice system. They know someone who’s affected and they just want to help and live out their gospel mandates,” she says. “We just need to get the word out.”

This is not the punchiest of news stories. “Prison chaplains need money.” Go figure. Can we please get back to the president’s tweets?

Probably most of us never imagine we would end up incarcerated either. But it happens. And it is hard to imagine an environment in which one would have greater need for pastoral care and counseling. After 40 years at Los Padrinos, Sister Doherty understands this better than most: “People suffer terribly in ways no one knows,” she says.

Once upon a time, a friend of mine was appointed a deacon chaplain at High Desert Prison (obviously in a remote area of north eastern California. He served nearly 10 years before retiring. His stories of how badly the prisoners needed someone to meet with and talk to were awesome. Depending on whether there are 96,000 prisoners to serve or even twice that, 36 chaplains is a very small number. As church, we are falling extremely short of the needs.