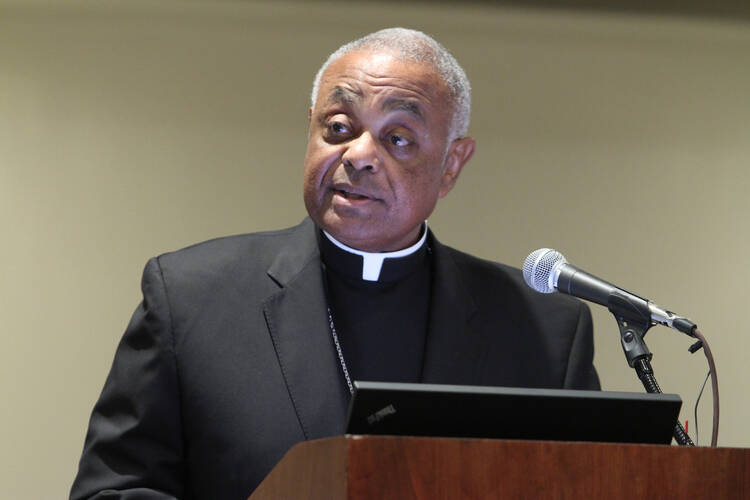 Archbishop Wilton Gregory, who led the U.S. Conference of Catholic Bishops during the tumultuous years when the wide scope of the clergy sexual abuse scandal was brought to light, said in a new interview that clericalism is still hampering efforts to address the issue, even at the highest levels of the church.

“I would say there is a resistance to do the hard thing,” the Atlanta archbishoptold NPR affiliate WABE in a March interview broadcast on April 10. “I think it’s culturally driven as much as it is ideologically driven.”

Archbishop Gregory addressed allegations by Marie Collins, an Irish laywoman and survivor of sexual abuse who resigned from the pope’s child protection commission. She complained that the Vatican refuses to implement recommendations from the group, even with the backing of Pope Francis himself. Ms. Collins, the archbishop said, “has touched on a truism.”

“It is the ugly face of clericalism that unfortunately still has too much influence in our church,” Archbishop Gregory said. “Marie Collins is a very brave woman, and she is a very determined woman, and I believe she’s a grace for the church.”

“It is the ugly face of clericalism that unfortunately still has too much influence in our church,” Archbishop Gregory said.

Archbishop Gregory was president of the U.S.C.C.B. in 2002 whenbishops adopted a zero-tolerance policy for priests accused of sexual abuse. At the time, victim advocates said the new charter lacked provisions to hold bishops accountable. Some members of Pope Francis’ commission have made recommendations to close that gap.

Archbishop Gregory said in the interview that he supports a tribunal to hold bishops accountable for failing to report priests suspected of abuse.

“Of course I do,” he said. “I think the Holy Father was on to a very helpful procedure.”

When asked why such a tribunal has not yet been created, Archbishop Gregory said that because he is not a member of the commission, which is headed by Boston’s Cardinal Seán O’Malley, he does not know the specifics of such recommendations.

Responding tocomplaints of continued stonewalling by the group Survivors Network for those Abused by Priests, or SNAP, the archbishop defended his decision not to release the names of priests accused of sexual misconduct, some of whom lived in the Archdiocese of Atlanta at one time but who did not minister in the archdiocese.

“My concern is this, that many of the names that might be released are dead and therefore we don’t know the full story,” he said. “Some of the people who have been on a list that was touted have never served in this diocese.

“In my time as the archbishop, any priest that has been removed has been identified. And I will keep doing that,” he continued. “I simply want to be able to be fair, just, to all parties, to those who have been harmed, certainly first and foremost, and those who may have been identified as perpetrators but without enough information to say that this event happened with any specificity.”

During the interview, Archbishop Gregory was also asked about the possibility of ordaining married men to the priesthood. He noted that the Catholic Church already permits this, in rare cases, but he said he welcomed the conversation about expanding the practice.

“It has to be balanced by several other factors,” he said.

“But it also has to be balanced by the witness of celibacy. Celibacy is not simply an ecclesial obstacle. It is a chosen way of life that we believe has its foundation in the imitation of the way that Jesus lived in his own time and in his own nation. And it is a call to a witness that I believe in our hyper-sexualized world has not less importance but even more importance,” he said.

Either way, he said the conversation will take time and will not be easy.

“The discussion has to be much more complicated than simply saying on Monday we don’t have a married clergy, on Friday we do,” he said. “Somewhere in between all these questions have to be taken into consideration.”

Archbishop Gregory is absolutely right re his insights on clericalism. It is true that it is culturally driven. The Church needs to be a leader in changing this cultural phenomena .

The book CLERICALISM by George B. Wilson, S. J. offers an eye opening awareness to just how prevalent it is in society. It also shows the extent to which laity contributes to its continuance. Beyond Priesthood, the distinction is strong in most professions where the title a person bears supersedes his/her core personhood. Such as, Doctors who remain Doctors in their social/community lives instead of limiting the title to their working profession.

But back to the Church. There is an apparent need for seminary training to be revised re the underlying subtleties of "specialness" that encourage the candidates to identify with this concept. It will require great introspection and humility.