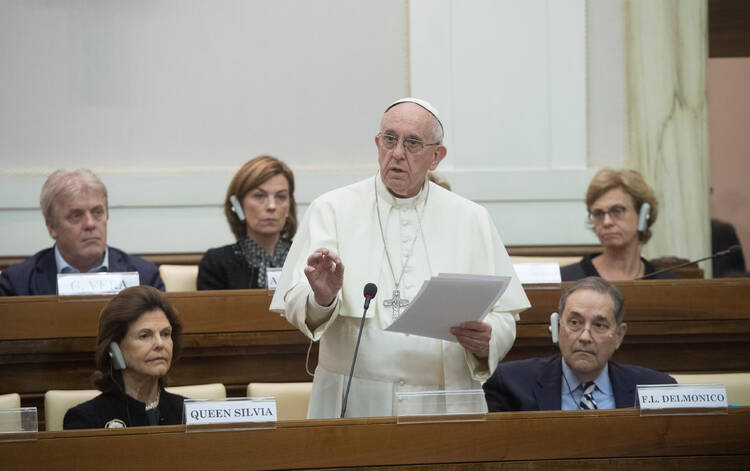 Pope Francis speaks at a conference organized by the Pontifical Academy of Social Sciences at the Vatican on Nov. 24. (CNS photo/L'Osservatore Romano, handout)

Pope Francis on Tuesday named a new official to oversee the Vatican office that processes clerical sex abuse cases amid mounting criticism over a yearslong backlog of cases and Francis' handling of the problem.

The promotion of Monsignor John Kennedy to head of the discipline section of the Congregation of the Doctrine of the Faith was the second abuse-related appointment in recent days. Francis named the Rev. Hans Zollner, one of the Catholic Church's top experts on fighting abuse and protecting children, as an adviser to the Vatican's office for clergy on Saturday.

Francis and the Vatican have come under fresh scrutiny over their response to the abuse crisis since Irish survivor Marie Collins resigned from the pope's sex abuse advisory commission on March 1, citing "unacceptable" resistance to the commission's proposals from the Vatican's doctrine office.

Collins' departure laid bare the cultural chasm between the commission's outside experts, who proposed best-in-class ideas for protecting children, and the reality of the Vatican bureaucracy and its legal and administrative limitations.

Kennedy was an assistant to the previous discipline section chief, the Rev. Miguel Funes Diaz, one of three congregation officials who recently left. The Vatican spokesman, Greg Burke, said Francis had approved their replacements as well as additional staff to handle cases, which by some estimates take two to three years to process.

The congregation assumed responsibility for processing abuse cases in 2001 after then-Cardinal Joseph Ratzinger, the future Pope Benedict XVI, determined that dioceses weren't disciplining pedophiles as church law required. The change required bishops and religious superiors to submit all credible accusations to the congregation, which decides how to proceed.

Cardinal Sean O'Malley, who heads Francis' abuse advisory commission, said in a recent interview that the Congregation for the Doctrine of the Faith needed more resources to deal with the caseload and related issues. Francis earlier this year named O'Malley to the congregation's membership in a first key move to place commission members inside Vatican offices to lend their expertise.

Zollner, the new addition to the clergy office's board of advisers, is another member of the pope's abuse advisory commission. He heads the Center for Child Protection at the Jesuits' Pontifical Gregorian University, which runs programs to train church personnel in child safety and abuse awareness.

As an adviser to the Congregation for Clergy, he will have a hand in advising the Vatican office responsible for training the world's Catholic priests in best practices.