Pope Francis: Damned are those who don't care for the poor and homeless 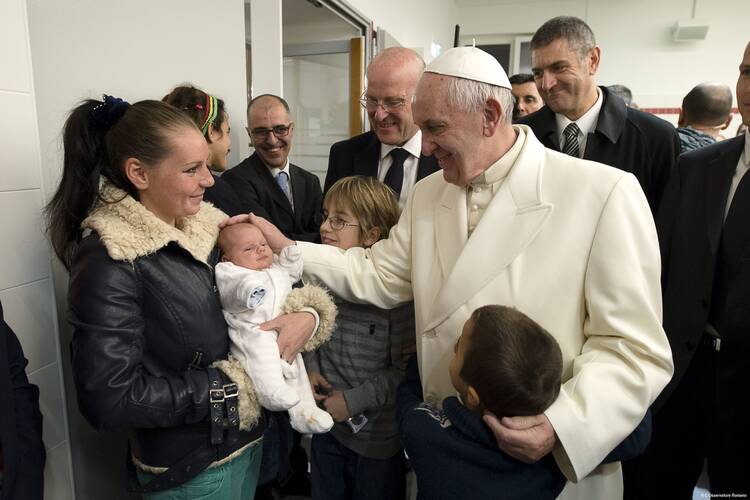 Pope Francis blesses a baby during a visit to a Caritas center for the homeless near the Termini rail station in Rome Dec. 18. The pope opened a Door of Mercy at the center. (CNS photo/L'Osservatore Romano, handout)

The parable of the poor man, Lazarus, lying at the rich man’s door, was at the heart of Pope Francis’ homily at the Santa Marta Mass on Thursday morning. The pope warned of the risks we run if we have the same uncaring attitude towards the poor and homeless people we see around us today.

Reflecting on the Gospel story of Lazarus, from St. Luke’s Gospel, Pope Francis warned against those who place their trust in things of the flesh. Trusting in vanity, pride and riches, he said, will distance us from the Lord. He highlighted the fruitfulness of those who trust in the Lord and the sterility of those who rely only on themselves and the things they can control.

When people live in a closed environment, surrounded by wealth and vanity and trusting in their own devices, the pope said, those people lose their sense of direction and have no idea of their limitations. Exactly as happens to the rich man in the Gospel, who spends his time at dinner parties and takes no notice of the poor man lying at his door.

He knew who that poor man was, he even knew his name, but he just didn’t care, the pope said. Was he a sinner? Yes, he was, and though the Lord forgives those who repent, this man’s heart was leading him on a one-way road to death. There is a moment, Pope Francis stressed, a line that we cross when sin turns into corruption.

This man was not simply a sinner but a corrupt person because he was aware of all the suffering but he couldn’t care less. Damned are those who place their hope in themselves, the pope said, because there is nothing more treacherous than a hardened heart. Once we are on that road, he added, it’s very hard for our hearts to be healed.

We must be careful, the pope warned, because if we eat, drink and assuage our consciences by simply giving a coin and walking past, this is not the right way to go. Instead, he said, we must realize when we are on that slippery slope from sin to corruption. We must ask ourselves, what do I feel when I see on the news that a bomb has fallen on a hospital and lots of poor children have been killed? Do I just say a prayer and go on my way like before? Is my heart touched, or am I like the rich man whose heart was not touched by Lazarus but only the dogs had pity on him? If that is the case, the pope said, we are on the road from sin to corruption.

For this reason, he concluded we must ask the Lord to look into our hearts to see if we are on that slippery slope to corruption, from which there is no return. Sinners can repent and turn back, he said, but it is very hard for those with closed and corrupt hearts, so let us pray that the Lord will show us which road we are following.

Is this a synopsis of the Pope's homily? Who is the author? Why not just use the Pope's actual words?