Pope Francis on a plane: never a dull moment 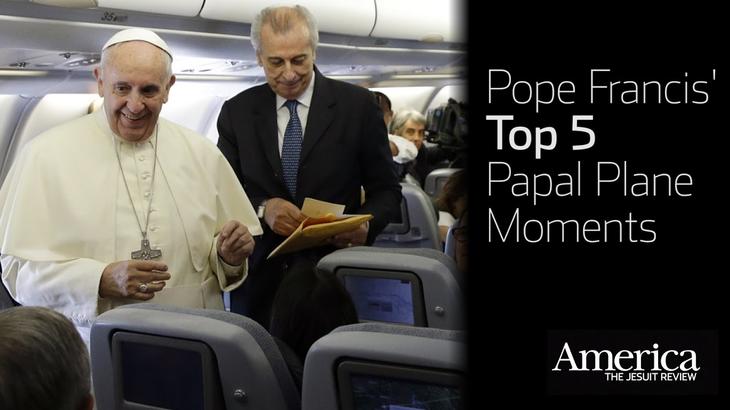 Pope Francis doesn’t rest on airplanes. Rather than take the time to watch in-flight movies, snack on peanuts or take a nap, the pope is known for making headlines at 30,000 feet.

When the pope gets on a plane, reporters go on high alert. With direct contact to a pope known for frank honest answers, there is rarely a dull moment. After four years in the papacy, here are some of Francis’s most memorable moments on the plane.

Francis was moved by the Holy Spirit to fly 12 Syrian refugees to Rome with him in April 2016. The group, six of whom were children, were all Muslim. The pope was on his way home from a visit to Orthodox leaders in Greece, after a deal between the European Union and Turkey would force migrants entering the EU illegally to return to Turkey.

Francis showed reporters pictures drawn by children in refugee camps. “What I saw today and what you saw in that refugee camp—it makes you weep,” he said.

4. 'It is not right to identify Islam with violence.'

Social injustice and idolatry cause terrorism, not Islam, Francis told reporters during a pilgrimage to Poland in 2016. He was answering a question related to the murder of an 85-year-old French priest by Islamic State militants in Northern France. All religions have fundamentalist groups, the pope said.

In November 2016, Pope Francis told the media the Catholic Church’s ban on women priests would remain intact. Earlier in the year, the pope called for an investigation of ordaining women as deacons. His comments ended any speculation that women deacons could lead to women priests, at least for the moment. Meanwhile, America and other media outlets debated how to describe the development.

“A person who thinks only about building walls, wherever they may be, and not building bridges, is not Christian. This is not in the Gospel,” Francis said on a plane press conference in February 2016 after a trip to Mexico.

The pope was responding to a question about then-presidential candidate Donald J. Trump’s plan to deport 11 million undocumented immigrants and build a wall along the Mexico-U.S. border.

Four months into his papacy, on a flight home from Rome, Pope Francis delivered a legendary line following a question about whether there was a “gay lobby” at the Vatican.

“I haven’t met anyone in the Vatican yet who has ‘gay’ written on their identity cards,” Francis said. “If a gay person is in eager search of God, who am I to judge them?”

The pope’s words were widely seen as a major change in the way the hierarchy talks about gay and lesbian Catholics.

There is a lot of things that the Pope has in common with Donald Trump. Both tend to speak off the cuff a lot and are often very imprecise requiring someone to clean up just what was meant. Here is a funny animated cartoon about the Pope's tendency to speak imprecisely. This was put out by some Lutherans and I posted before. It is called "Frank, the Hippie Pope."

And there are some notable differences between Pope Francis and Donald Trump as well. Pope Francis is intelligent, well-read, wise and he tells the truth. It is insulting to Pope Francis to compare him with the current occupant of the White House.

Your comments seemed to be all the same. Trump is bad. It is like the boy crying "Wolf." After awhile no one pays attention. I am not a personal fan of Trump as a person but have changed my opinion on his ability to lead the country in a better direction based on what he has done since the election. I believe a lot of people have made that transition.

Here is an article (http://victorhanson.com/wordpress/9934-2/#more-9934) from whom I consider one of the best writers in the country, Victor Davis Hanson. I suggest you and anyone else who opposes Trump read it to understand how others are coming to different conclusions than you and the others who oppose Trump.

As far as the Pope is concerned, there is a lot to be grateful for and a lot that has people worried. As far as lying, one of the five instances which Mr. Massey has highlighted is a definite lie.

" 'It is not right to identify Islam with violence.'" Islam preaches violence in the name of Allah. It is in the Quran in several places and much more so in the Hadith. I doubt that any Muslim would disagree with this. The Pope has to be very careful because Islam is so large and millions of Christians are in primarily Muslim lands. So I understand the carefulness that must be exercised in any dealing with Muslims. But the statement itself is not true.

The Pope has also made numerous statements in areas where he has no expertise, namely economics and global warming of which many disagree. I will not comment on the religious arguments that he has made that would have seemed strange to any of the Jesuits who taught me but seem to be part of the modern Jesuit agenda, if America represents Jesuit thinking. These have been discussed in many places on this site and it not the place to do it here.

As far as the Pope and Trump are concerned in terms of comparison. I would definitely not compare the morals of each for they are opposite ends of the moral spectrum on many moral scales. But they are two of the most recognized people in the world, heading large organizations, and their pronouncements are watched very carefully by billions of people. They both have strong wills and want to change the world. So there are a lot of comparisons besides that they both seem to get themselves into hot water from off the cuff remarks taken out of context by the press.

Pope Francis's native language is Spanish but he also speaks Italian, Portuguese, French, German, Ukrainian, English and is conversant in Latin. Some precision perhaps just gets lost in translation.

Thank you for posting my original comment. Just to let other commenters know, a link can often send a comment into moderation so as to prevent spammers from make links to their websites.

The website and this comments section continues to censor my comments when it has a link while on other threads, spammers have put up their links. I was able to get the link posted when I embedded in a sentence as opposed to highlighting it separately.

Automatic flagging of comments designed to prevent spamming is not the equivalent of "censorship." The spam detection service we use has many inputs; links are only one of them, and it catches far more spam than it does legitimate comments, though of course false positives are unfortunate. When we catch a false positive or a spam comment that made it through, it provides feedback to the system to improve detection in the future.