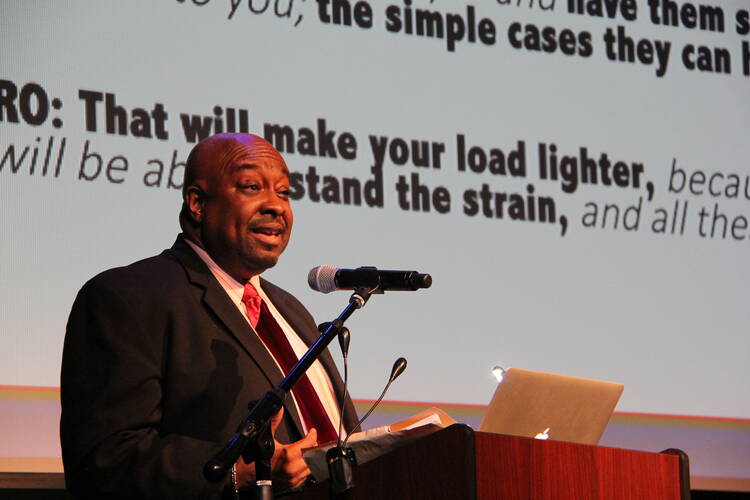 Grant Cooper remembers the conversations his mother has held with herself. He remembers her paranoia and depression. He remembers how the Pentecostal church in Camden, N.J., stepped in when his mother’s mental health deteriorated in the 1970s.

His mother was close to local faith leaders, and the church helped feed him and his four siblings while they lived in foster homes and his mother got professional help. But Mr. Cooper wonders if things would have been different if the clergy were better informed about issues of mental health.

“I wish they were better at identifying some of those signs [of mental illness],” he says. “If they were able to see some of that stuff, they probably could’ve helped and intervened first.”

In a summit organized by the New York Commission of Religious Leaders, faith leaders received the kind of training Mr. Cooper’s family could have benefited from. Mr. Cooper joined around 200 faith leaders and laypeople gathered at the Sheen Center for Thought & Culture in New York City on Feb. 13 to learn about mental health awareness, suicide prevention and pastoral wellness from mental health researchers and advocates.

Rabbi Joseph Potasnik underlined the need for mental health training for clergy, saying the faith community has been silent for too long on the subject. “We would talk openly about different ailments,” he told summit participants. “But when it came to mental health we were somewhat on the silent side.”

Pastors are on the front lines of care, both spiritual and physical, Cardinal Timothy Dolan said during a press conference at the event, and they must be equipped to help both needs. “One of the things churches can do, one of the things communities of faith can do, is create a climate of trust, security, safety, where people really feel they’re at ease to speak from the heart, from the soul,” he said.

Chirlane McCray, first lady of New York City, told the summit that faith leaders play an important role in connecting people to mental health services since individuals may be more willing to talk to a priest than see a psychiatrist. In 2015, Ms. McCray helped launch ThriveNYC, the city’s plan to encourage discussion about mental illness and to close treatment gaps. More than 500 New Yorkers, from 160 faith-based organizations, have been trained in first aid for mental health through the program, she said.

“A faith leader can do so much in helping a person feel comfortable in talking about what’s plaguing them."

“A faith leader can do so much in helping a person feel comfortable in talking about what’s plaguing them, what’s making them feel uncomfortable, and help them get to the right type of care,” Ms. McCray said.

Dr. Jamila Codrington, a clinical supervisor at Astor Services for Children and Families, in Rhinebeck, N.Y., detailed the warning signs of a mental illness in children and adolescents, such as declining performance in school, poor concentration, avoiding friends and feeling hopeless. Low-income and minority communities are at an increased risk because the effects of trauma can be passed from one generation to another.

Poverty, abuse, the death of a loved one and stress over immigration status are all risk factors for adolescent mental health problems, Dr. Codrington said, and children must be cared for differently than adults.

“For many young people, they express their reality, perceptions and experiences through play,” she said. “Compassion and active listening—those two things can be done by anyone.”

Dr. David Ginsberg, clinical professor and vice-chair of the New York University Department of Psychiatry, taught the audience of faith leaders how to administer the Columbia Suicide Severity Rating Scale, which identifies the likelihood of self-harm and the level of intervention urgency. Removing means of self-harm and directly asking individuals about suicidal thoughts are important intervention tactics, he said.

There's a heroin epidemic in this country and faith communities need to be talking more about it.
The Editors

However, the good work of clergy should not come at the cost of personal health, said Dr. Derek Suite, sports psychiatrist and founder of Full Circle Health. The overwhelming nature of caregiving can lead to decreased compassion and burnout, he said.

“We can have life and death before us,” Dr. Suite said. “The risk that you all face, and we all face, as caretakers is that our senses get overloaded.”

Religious life can be isolating, he said, which is why leaders should make sure they have a community of counsel for times of need. Clergy should also make sure they are sleeping enough and eating healthily, too. Observing the sabbath can be one of the most difficult things for clergy to do because of the workload demands of religious life, he added.

This article regarding mental illness covers a number of different aspects, but it concludes with two perspectives that I would offer need to start a new discussion. The article points to “Greater challenges await ahead” and “A great worry looms as talks ….” What the article does not bring into perspective are the major advances in the treatment of mental illness that new technology and software are making available. These new treatments, powered by a smartphone, software and the network, will change how people are diagnosed, treated and most importantly how they are supported in their daily lives. These new apps/services will improve the quality of life for the individual as well as their caregivers.

The challenge is to understand how the paradigms are changing. The traditional doctor-patient relationship will be expanded exponentially by the software supporting the doctor and linking the patient to the required resources in real time. This is not some future dream. Facebook is now launching a new service which uses AI to predict and prevent suicide (ref. “Artificial Intelligence Is Learning to Predict and Prevent Suicide” at https://www.wired.com/2017/03/artificial-intelligence-learning-predict-prevent-suicide/). Facebook has deployed a software tool which integrates all of the data available within its digital world to identify the individuals at risk by utilizing the power of the connected world, and then getting the at-risk individual connected to immediate help if needed.

Facebook is just one example of the changing world of physical and mental support services. A simple Google search will display numerous new apps like Anxiety Coach (by the Mayo Clinic), WorryWatch, and Pacifica. These new apps are very specialized, like Code Blue which is designed to provide teenagers struggling from depression or bullying with support when they need it. These apps completely change how support (especially in crisis) can be delivered. For example, with Code Blue the users can choose several contacts to be part of their support group. With just a few taps, the app will alert the support group that the user needs immediate help. The support group can then text or call the user. The app can also share the user’s location with the support group, and members can indicate that they are on their way to see the user in person.

I would offer that a follow-up article is needed to set an additional perspective for our Church, clergy, care givers and politicians. We need to understand the benefits of deploying these new technologies. Improvement in the quality of life for those who suffer and their care givers and families is the major benefit; however, the ripple effect which will lower medical costs and reduce lost wages and improve productivity will also have a major impact. The article was correct about insuring that everyone (rich and poor) has access to these treatments and services. However, to insure access for all, we will need to advance to new paradigms. The technology will significantly change (enhance) the doctor-patient relationship. We need to accept the reality that if we integrate all of a patient’s digital information (Web and medical records), the software (AI) will provide the doctor a composite summary of the patient that it would be impossible for him/her to have done on their own. Further, this composite will be dynamic, continuously updating and adjusting to the patient’s condition.

I would offer that we are at a point where our Church and all of her structures need to embrace the changes that technology is providing and integrate this science/medical component into our pastoral stance. To minister going forward, our leaders in this area (clergy and laity) who support individuals with mental illness will need to move to the front of the technology curve. We must be able to assist our faithful with the acceptance and use of these new life-changing services. We may need to accept that an individual’s spirituality may include (and not explicitly exclude) a smartphone. This may be true for many more than just individuals with mental illness. Our real challenge is to begin discussing and identifying the risks (loss) of not proactively embracing the digital gifts God is giving us.

I look forward to your comments and discussion.
God bless!
Dave Wither