There's a heroin epidemic in this country and faith communities need to be talking more about it. 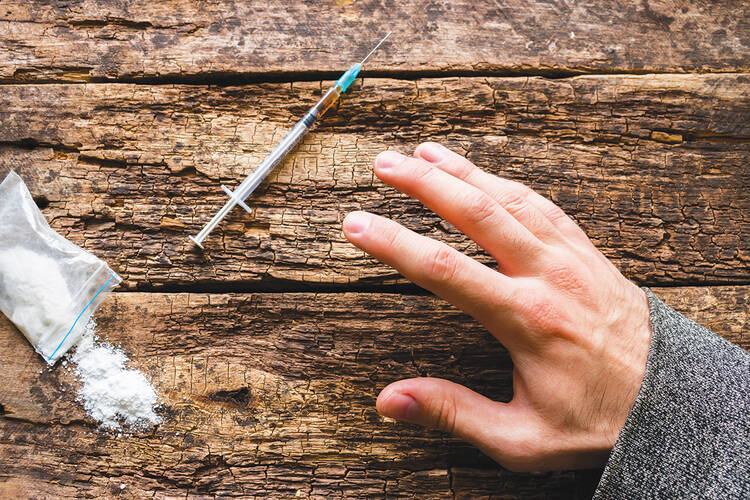 Police in East Liverpool, Ohio, recently shared on social media a photo of two adults slumped over in the front seats of a car, while a 4-year-old boy sat in the back seat. The adults had overdosed on heroin, almost leading to their deaths, and the police hoped the image might shock people into recognizing the damage that opioid abuse can cause. To some degree, it worked. The photo, which received national attention, prompted local government action.

Unfortunately, stories like this are all too common these days. Recent weeks brought more examples: the 2-year-old in pink pajamas trying desperately to wake her unconscious, overdosed mother in the aisle of a Family Dollar store in Lawrence, Mass.; the 7-year-old girl in McKeesport, Pa., who told her bus driver she had been unable to wake her parents, both of whom were dead from overdoses, leaving the girl’s three siblings, ages 5, 3 and 9 months, alone in the home.

In the last 10 years, the United States has seen the number of heroin-related overdoses nearly quadruple. According to the American Society of Addiction Medicine, in 2014 more than 10,000 people died from heroin overdoses and more than 18,000 from prescription opioids, together accounting for nearly two-thirds of the accidental drug overdoses in the country. The greatest increases in the death rates have occurred in the Midwest and the Northeast, and in young adults ages 25 to 34. Four out of five heroin users first became addicted to prescription opioids before moving on to heroin, often because it is cheaper and easier to obtain.

Around the country, local and state governments, health care workers, law enforcement, families and faith communities are struggling with how to end this epidemic of addiction. Some strategies have proved effective in countering addiction. Physicians have begun issuing short-term prescriptions for opioids following medical procedures so that the drugs will last only until a recovering patient can visit a physician. Needle drop-off programs, more comprehensive prescription monitoring programs to discourage individuals from requesting prescriptions from multiple doctors and increased numbers of and access to treatment centers have also helped. Additional evidence-based strategies also can benefit the wider community, including the expansion of good Samaritan laws, so that drug users are not prosecuted when reporting an overdose, and increased access to drugs such as naloxone that counteract overdoses. These strategies recognize that drug abuse is a community issue with community solutions.

Perhaps the most important change communities can make is to treat opioid abuse as a health issue, not a criminal problem. Increasingly, it is understood that individuals struggling with addiction need medical help, not jail time. This welcome shift has gained support on both sides of the aisle. Despite some arguments about funding, a bill supporting drug treatment, monitoring and prevention programs passed the Senate with a vote of 94 to 1 and the House with a vote of 400 to 5; it was signed into law by President Obama in July.

The law is one more reminder of the importance of a comprehensive approach to combatting addiction. Although legal and medical issues must be addressed, the emotional needs of those suffering from addiction also must be cared for—as well as the family members who often get pulled into a terrible spiral. In this effort, faith communities can play a unique role. For many people, drugs seem like a solution to the isolation that can come from a lack of hope, self-esteem, resources or community support. Faith communities can help to provide this support while working actively with clinics, medical professionals and city officials to meet health and legal needs as well.

Hunterdon County in New Jersey offers one positive example. Through its One Voice initiative, the county prosecutor’s office has teamed up with the Safe Communities Coalition of Hunterdon/Somerset and with area faith leaders to address issues of importance to the community. During the weekend of Oct. 7-9, more than 100 faith leaders in the county spoke to their congregations about opioid addiction.

The Hunterdon County initiative encourages dialogue among churches, law enforcement and the city, but it also encourages faith communities to think more deliberately about their own role in the crisis and what each one might do to support those suffering from addiction.

These initiatives also serve as reminders that faith communities have real opportunities to become sources of education and comfort. They can offer prayers and help with one’s faith life. They also can connect people to stress management resources, job resources, counseling, education in the warning signs of addiction and can help to discourage the stigma of addiction

As the number of individuals affected by this epidemic grows, it is important to ensure that there are even more who are willing to help find a solution.

The Editors
Show Comments (
2
)
Comments are automatically closed two weeks after an article's initial publication. See our comments policy for more.
Tim O'Leary
5 years 8 months ago
What a shocking story. I wonder how and why this epidemic happened? Was it loneliness or social isolation, or a loss of purpose in life, or a loss of faith? Or is it in any way connected with the rising acceptance of marijuana as a recreational drug. Glad to see there is near unanimous political consensus on this new scourge.
Lisa Weber
5 years 8 months ago
Twelve-step programs all depend heavily on a community to support those who are struggling with addiction. Perhaps addiction would not be such a problem if we consciously developed community.