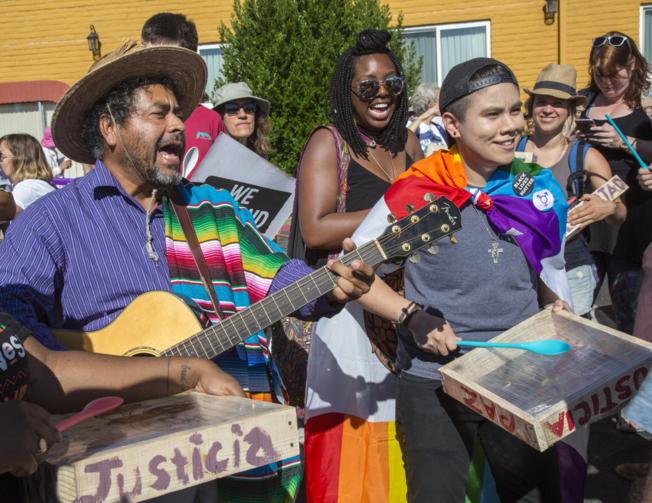 Activists gather on both sides of the U.S.-Mexico border fence Oct. 8 in Nogales, Ariz., and Nogales in the Mexican state of Sonora. (CNS photo/Jim West)

As Patrick Gilger, S.J., says in his article “Re-enchanting the World,” it is hard to find belonging in an age where we lack a sense of common meaning. As a result, Father Gilger explains, protest movements can become a major source of commonality. But, he argues, bonds based on resistance and refusal are fragile if they lack a positive orientation.

Yet, while belonging is tenuous in some ways, being a part of certain systems is the nearly unavoidable default. Simply being a U.S. citizen, for example, means I am complicit in anything the government does in my name or with my tax dollars—from deporting undocumented immigrants and bombing foreign countries to funding schools, infrastructure projects and services to those in need. I, along with the vast majority of Americans, cannot meet my basic needs without using products produced by people I do not know. I am connected to public power grids, water lines and sewer systems, and depend on fossil fuels for transportation.

Some aspects of this connectedness might be good. But consequences of our interrelatedness make it more difficult to act as though we truly belong to each other. The systems we are a part of can hurt workers at home and abroad, innocent citizens of countries with which we are at war, migrants fleeing violence, people living in poverty or future generations who need the earth to remain a livable environment. Sometimes, it is precisely for the sake of recognizing our connection to—and responsibility for—our fellow humans that we build movements that include a strong element of protest and refusal. And when we begin from the premise that we belong to each other, we do not just resist the “reigning social system” for the sake of resistance; we also have a constructive vision to work toward.

I first realized how difficult—and beautiful—this kind of resistance can be when I visited White Rose Catholic Worker Farm in La Plata, Mo. If you ask members of White Rose what they are against, they might have a long list, including militarism, global warming, consumerism, torture and exploitation of workers. It is their opposition to these forms of violence and oppression that led them to refuse things many Americans consider necessities—paid employment, cars, pre-packaged food, indoor plumbing and electricity—in order to avoid paying taxes that fund unjust wars, polluting the environment and supporting unethical businesses. Yet they might also tell you that distancing themselves from many mainstream institutions and practices has made them closer to God, nature and their fellow humans. As they see it, disconnecting as much as they can from the U.S. government, the global economy and modern technology has not isolated them; it is this very detachment that frees them to live lives of sacrifice, community and joy.

While more extreme than many Catholic Workers, White Rose is part of a long tradition of resistance and community building started by Peter Maurin and Dorothy Day in the 1930s. Models of “refusal” in many ways, Day, Maurin and many Catholic Workers since have resisted the government by committing acts of nonviolent civil disobedience: refusing to pay taxes, to be drafted or to register as non-profits, and criticizing state-sponsored welfare programs.

Yet Maurin and Day stood for much more than refusal. Their whole manner of thinking was based on a positive message rooted in the Gospel: the recognition of the value of each human, and the premise that we must take responsibility for recognizing that value through direct acts of service, voluntary poverty, pacifism and communal living. The movement they started is responsible for hundreds of houses of hospitality (including the Oakland Catholic Worker, where I live and work), which focus on meeting the needs of their local communities. “We believe not only in St. Thomas’ doctrine of the common good,” Dorothy Day wrote in her 1955 fall appeal, “but feel [the common good] can be affected only if each one of us alone realizes his personal responsibility to his brother, that his love for God must be shown in his love for his brother, and that love must be expressed in the works of mercy, practiced personally, at a personal sacrifice.”

Of course, this belief does not eliminate hard decisions about how and when to protest or cooperate. At the Oakland Catholic Worker, we serve Latin American immigrants, many of them undocumented, who have often been severely harmed by our nation’s laws and policies. This sometimes means we work outside of government structures, participate in protests and maybe even practice civil disobedience. But we also work with government-funded programs, advocate to our representatives and help people sign up for welfare.

Whether we choose belonging or refusal, though, we are at our best when all of our decisions are centered around the people we try to serve—particularly Latin American immigrants living in our area but also other neighbors in East Oakland, our nation and people around the world. What impresses me most about the Oakland Catholic Worker is the community of hundreds of donors and volunteers who contribute to our work each year: the staff, volunteers and board members who came to receive help and returned to serve others; the guests who braved the border to make a better life for their children; and the kids who steal our office supplies, care for their younger siblings and brighten our lives with their artwork. We may not have put the world back together but, while we work on that, we try to exemplify the positive goal of resistance by bringing our community together.

Maria Benevento
Show Comments (
4
)
Comments are automatically closed two weeks after an article's initial publication. See our comments policy for more.
William Rydberg
4 years 4 months ago
If you want Peace work for Justice. Paul VI, in Christ,
Jud Newborn
4 years 4 months ago
I wonder if the White Rose Catholic Workers Farm also draws any inspiration from the German White Rose Christian anti-Nazi resistance? This would certainly be in keeping with their values. I do an inspirational multimeedia lecture about them, 'The White Rose Resistance - And Heroes in the Fight for Human Rights Today." It is based on my book, "Sophie Scholl and the White Rose, companion to an Academy Award nominated German film. The students of the White Rose were drawn strongly to Catholic existentialism to find grounds for resistance. The most famous were the siblings Sophie and Hans Scholl, former Hitler Youth leaders! Also Willi Graf, previously a member of the Catholic "Gray Order" anti-Nazi youth movement. In 1943, in their final act, Hans and Sophie mounted a gallery high above the University of Munich's vast atrium and scattered hundreds of their sixth leaflet down upon the heads of students milling about below. They were quickly arrested - interrogated - subjected to a show trial - and beheaded. But today they are icons in German for "civil courage" and the need to "speak truth to power." https://www.linkedin.com/in/judnewborn
Christopher Spicer
4 years 4 months ago
Yes, as a member of the community late 2010-2012 I recall reading your book. We highlighted one member of the group on the anniversary in our February 2012 newsletter; thanks to Jim Forest's contributing article, "A Canonization in Munich: Saint Alexander Shmorell." http://jimandnancyforest.com/2012/02/schmorell-canonization/ With origins in Chicago, the Illinois Coalition for Justice Peace and the Environment still is a webhost of the community's original mission statement. We are a community in the Catholic Worker Tradition of hospitality, nonviolence & simplicity striving to practice the works of mercy, peacemaking & education for social justice. We hope that our words and actions reflect our prayers and discernment as we seek ways to walk humbly, love tenderly & act justly with God and creation. We denounce the evils of militarism, ecological destruction & all forms of oppression that fail to recognize the rights & dignity of the human and earth. To that end, we envision alternative ways of community to promote personalism, sustainability and inclusivity in all that we say & do. Out of a sense of solidarity & mutuality, we share our home as a space to encourage people to work & learn together, organize for social change & support journeys toward true, authentic selves.
Bob Waldrop
4 years 4 months ago
I am one of the founders of the Oscar Romero Catholic Worker in Oklahoma City. When the construction of the southern leg of the Keystone pipeline was launched, an activity complicit in the ecocide of the boreal forests of Canada's tar sand project, I volunteered to be among those to be arrested in protest. Finding the construction site, we hurried to get everything set before the sun rose. So with help I was chained to a piece of construction equipment by an ingenious device the young people assisting created. Later I was taken to the county jail and booked on charges of obstruction and trespass. I was later quoted in the press saying that my baptism gave me the right and the responsibility to act against evil. We have always tried to resist in word and deed the evils of our day. We have nine inches of insulation in our walls, 14 in the attic, R-20 insulated window shutters, edible landscaping, 120 sq ft of glass on the south that heats our house in the winter. We hang our clothes out to dry and helped start the first food coop in the US that only sells locally grown and made food and non-food items. We have always felt the guidance of Dorothy Day and Peter Maurin in this. For the past decade, we have attempted to call public attention to the material cooperation of the US Catholic bishops with the objective evil of the unjust war on the people of Iraq, which the bishops praised by their very faint critique of it. We have always felt it ironic that the bishops and the Catholic press that praise Dorothy Day ignore the attempts of the Catholic Worker movement to call attention to this most egregious sin against the gospel of life.