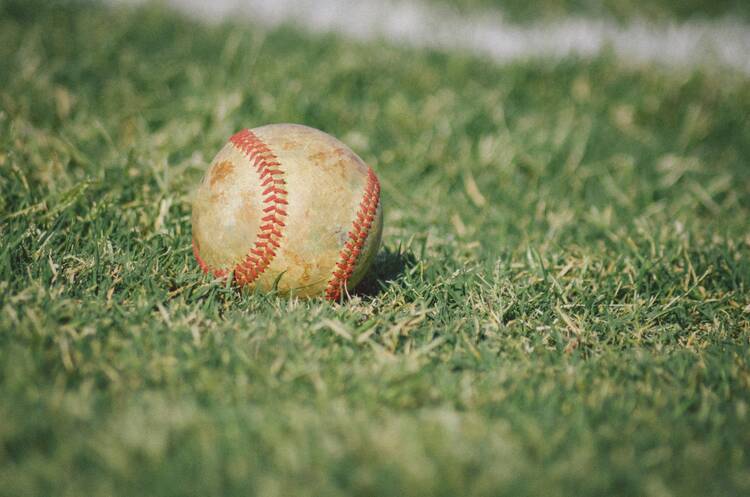 My father recently sent me a video message on my cell phone. In it was the iconic scene from the film “Field of Dreams,” in which Kevin Costner, playing Ray Kinsella, an Iowa farmer turned baseball mystic, greets his father for the first time in years. It is a scene of parent-child connection that always sends my family into tears. And so my dad thought of me and my siblings while watching the film with my mom, and then pulled out his phone and, rather than send us a YouTube clip, sent some shaky footage of my parents’ television showing the movie. In the background of this particular version of the film, as Kinsella asks his dad, “Wanna have a catch?” one can hear the sound of sniffling.

And who can blame them? This year marks the 25th anniversary of the now classic film that tells the story of a man who follows the direction of a mysterious voice—one that commands, among other things, “If you build it, he will come”—and plows under his Iowa cornfield to build a baseball diamond in his backyard. It is not a stretch to say my family has watched the film more than a dozen times. And each of us likely would subscribe to the statement by the sports writer Bill Simmons that “the world is separated into two types of people—people who love ‘Field of Dreams,’ and people who don’t have a heart.”

In the film, based on the novel Shoeless Joe, by W. P. Kinsella, ballplayers of the past return to the Iowa field for a second chance at the game they loved. In the process, baseball and belief, family and foul balls, all swirl together to create a scene so picturesque, so peaceful that more than one player stares out at the lush grass and the dark earth and the horizon and wonders aloud: “Is this heaven?” Ray Kinsella famously replies, “No, it’s Iowa.” But eventually even he begins to wonder as the film channels the words of St. Catherine of Siena: “All the way to heaven is heaven....”

The real-life field, a set built for the film in Dyersville, Iowa, has led a less blissful existence. A recent piece in The Atlantic reported on the battles between neighbors, developers and politicians over how best to preserve the history of a field constructed to tell a fictional story that gets at such deep truths that for the last quarter-century thousands of people have made pilgrimages to this rural patch of farmland.

The thing about “Field of Dreams,” though, is that you don’t have to love baseball to find beauty in the film.

Despite my dad’s enthusiasm for the film, he isn’t a sports guy. Attempts by presumptuous strangers to discuss Major League Baseball with him usually result in a lot of nodding on his part and an eventual save by my mother, who is far better prepared to enthusiastically debate a team’s latest trades or analyze a pitcher’s E.R.A. The thing about “Field of Dreams,” though, is that you don’t have to love baseball to find beauty in the film. You just have to want to be reminded of the power of faith in things unseen and the need to find courage to follow a path not yet trod. It offers stories of second chances and reminders of the beauty of reaching out when all seems lost, only to find that someone has been watching out for you all along.

And even though he doesn’t follow professional teams, my dad always has been a willing participant in the backyard versions of our family’s favorite sports. When my brother inquired about batting cages, my father built one in our backyard, complete with a pitching machine that appeared one Christmas morning. Four gray poles stood like soldiers, draped with a black net, a home plate tucked into the ground at one end. He built it, and our friends came, and they marveled at this additional proof that I had the Greatest Dad in the Universe.

But even more memorable, perhaps, were those many summer nights when he would head out to the quiet road in front of our home with a baseball and bat in hand. And my siblings and I would stand on our front lawn waiting as he threw the ball in the air and then knocked it so high that we’d grow dizzy circling below it, our gloves outstretched. And time seemed suspended until, in a glorious moment, the ball would snuggle neatly into my Kirk Gibson glove, and the whole world would fall back into place around it. And my mom, sitting on the front steps, would cheer. And then we’d dig our feet into the lush grass and the dark earth and look out toward my father and to the horizon beyond and, catch by catch, we’d build a world honoring the One who, even as we wait for him, already has come.

Kerry Weber is an executive editor of America and the author of Mercy in the City (Loyola Press).

@Kerry_Weberweber@americamagazine.org
Show Comments (
6
)
Comments are automatically closed two weeks after an article's initial publication. See our comments policy for more.
Tom Helwick
7 years 12 months ago
Kerrry, As a former college and semi-pro pitcher I thank you for such an insightful essay about a truly remarkable film. For whatever reason baseball for me has a spiritual element to it that is a conduit to a greater reality that's largely unspoken. It's the smell of new glove or freshly mowed grass, or the sound of a ball as it smacks into a mitt along with crack of a wooden bat on a horsehide ball. It was when my widowed mother took my brother and I to our first professional game and I beheld the beauty of the emerald field that was Cleveland Municipal Stadium radiant under the lights. All this stuff feeds the soul and makes being alive a joy. When Ray's father asked if this was heaven and as you referenced he said "No it's Iowa" the next question comes from Ray asking his father "Is there a heaven?" to which his long deceased dad reply's an emphatic " Oh yes!".
David Pasinski
7 years 12 months ago
A wonderful essay for this movie that always moves me... Now let's have someone combine for a great essay on "The Natural"!
David Pasinski
7 years 12 months ago
A wonderful essay for this movie that always moves me... Now let's have someone combine for a great essay on "The Natural"!
Monica Doyle
7 years 12 months ago
Lovely!
Bill Lewis
7 years 12 months ago
What a wonderful read, Kerry. I tip my 18-year old Field of Dreams cap in your direction! There are people who see the baseball men, and sadly, those who do not. It's always a pleasure to find individuals like you and your father, people who understand and appreciate the real message and meaning behind this treasured classic. You hit the nail on the head, Kerry -- Field of Dreams is not a baseball movie! It's a heart-tugging message about faith, and the courage to follow that faith, no matter how unconventional or scorned the path might be. It's about second chances, and never giving up on your dreams, regardless how far beyond reach they may seem. I also appreciate, Kerry, how little time you spent delving into the unfortunate side circus of commercialism that has shadowed the field for 20 years now. I developed a website (http://www.fieldofdreamsiowa.com) devoted to the movie, and I think you'll find my website gives about as much attention (maybe less) to the controversy as your article does. In my book, the Field of Dreams and its messages are so way above and beyond these petty squabbles. For me, and people like you and your father, the magic of the movie lies in the 'thrill of the grass' and the special connection it nurtures between loved ones. The film salutes family, and it encourages all of us, through faith, to reach for the stars. I'll be reaching for those stars next month when I travel to Dyersville for the 25th anniversary celebration of the movie's release. Again, marvelous article. Reading it seemed like heaven. :-)
Kerry Weber
7 years 11 months ago

Thanks very much for your kind comments!