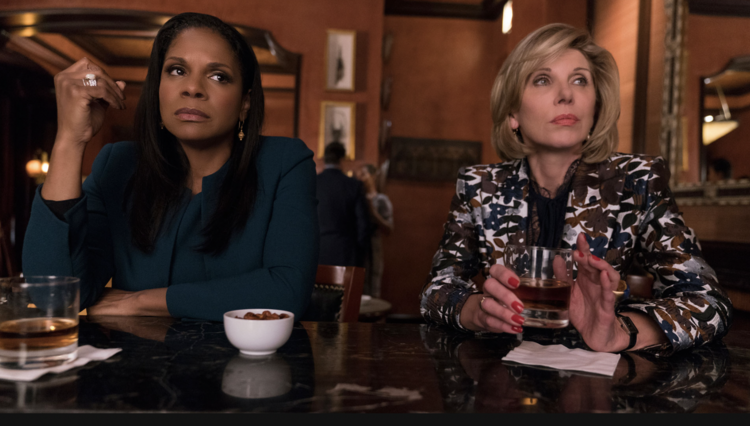 Audra McDonald and Christine Baranski of “The Good Fight” (Paramount+)

Since 2016, no television series has been more engaged with the experience of what it is like to live in the United States than “The Good Fight,” now in its last season and scheduled to end on Nov. 10. There is also no show currently on television that I seem to have to explain more often, perhaps because it airs on Paramount+—which, compared to places like Netflix, Amazon or Disney+, is often viewed as a guppy in the streaming pool. (Full disclosure: I know some of the writers for the show.)

But when it comes to compelling, funny and also challenging entertainment, “The Good Fight” is absolutely the show we should all be watching right now. Here’s the premise: Passionate liberal Chicago attorney Diane Lockhart (Christine Baranski), who had been a main character on Robert and Michelle King’s previous show, “The Good Wife,” joins an all-Black law firm run by Liz Reddick (Audra McDonald) and others (in this season, Andre Braugher’s Richard Lane) at the precise moment when Hillary Clinton is defeated in the 2016 presidential election. The series charts her struggle and the struggle of the firm to live in the strange and often awful new world that the Trump administration creates.

When it comes to compelling, funny and also challenging entertainment, “The Good Fight” is absolutely the show we should all be watching right now.

With each season the series has gotten bolder and embraced the absurdity of our reality more fully. But, unexpectedly, the election of Joe Biden in 2020 did not change the show’s sense of dislocation. In fact, in its final season things have gotten exponentially worse. While the law firm continues to litigate cases and deal with its own internal politics, there is some kind of mass protest going on below on the city streets, and each week it seems to get both more violent and less clear. Like something by Samuel Beckett, this is a situation in which no one is really sure who is protesting or what they want.

Much of the time these protests are just background noise in the office, with occasional punctuations of screaming or explosions. But each week the conflict impinges more and more directly on the characters; a car bomb set off in a garage blows out a window in an office where Diane sits. When Liz criticizes Clarence and Ginni Thomas in a television interview, one of the cameramen points his finger at her as if it were a gun and pulls the trigger. A white supremacist shoots a man in the head in front of a Jewish lawyer, spitting anti-Semitic slurs.

For the first few weeks of the season it seemed like perhaps we were getting the world through Diane’s eyes, her own worst fears for the nation coming to fruition. But it is more and more clear the show isn’t portraying some dark fantasy of Diane’s but our own world’s situation and behavior. We are the people constantly presented with stories of horrifying things going on in our country, shocking things like the presence of white supremacists among our border patrol and other law enforcement; the shooting of both unarmed people of color and protesters by police, without any consequence for the officers involved; and an active attempt by the last president of the United States to try to bring about a coup that would have allowed him to retain power. Yet despite the gravity of what these crimes represent, we understand them like a din in the distance, fighting that is going on somewhere else.

It is more and more clear the show isn’t portraying some dark fantasy of Diane’s but our own world. We are the people constantly presented with stories of horrifying things going on in our country.

Are the Kings and their writing staff truly suggesting that we are, as one lawyer concludes in the most recent episode, not living under the threat of a civil war but actually in the middle of one? That kind of talk is generally avoided in the press, I think with the tacit understanding that to talk of civil war is both to make it more likely and to give it more credence. And by and large I have subscribed to that theory. I don’t want people on any side to feel so vindicated in their sense of grievance that they believe the rule of law or the commitment to democracy no longer needs be heeded. I don’t want us to give up on America.

But we are living in a country where at least 18 states, almost all Republican-controlled, have recently passed laws that make it harder for U.S. citizens to exercise the most fundamental right of our democracy, the right to vote (and these laws have been found to disproportionately affect people of color) and a Republican former president has repeatedly insisted the last election was “stolen,” without any evidence but vehemently enough that 70 percent of Republican voters say they believe him. We are busy arguing about whether or not Donald Trump should be charged for inciting the Jan. 6 attempted coup, but the fact is that other coup-adjacent actions are taking place around us, and some of them are succeeding.

Knowledge does not necessarily lead to new purpose on “The Good Fight.” Diane has spent most of the series just trying to process her overwhelming feelings of grief, anxiety and confusion. What peace she has found this season has come through an F.D.A.-approved hallucinogenic, which seems to have helped her by creating a space between her and the events going on around her. She is less sucked into the drama of it all and more able to just speak from her own convictions.

While that storyline has allowed the show to go to even more surreal places—in one episode Diane finds herself suddenly and blissfully floating in the air—it has also been an interesting take on the struggle involved with creating some kind of interior space free from the buffeting of the storms around us. Diane is not a religious person, but both her quest and the space and freedom she has found for herself in some ways resembles the everyday mysticism of many Catholic spiritualities. Through silence, a slow reading of Scripture or a slow, intentional walk on a pretty autumn day, we allow ourselves to come to a place where we are more grounded, more able to see things on our own terms.

I want to attribute the lack of conversation about “The Good Fight” to its network and the fact that the show has been around for a while. But honestly, I’m afraid it is another indication of exactly the kind of ostriching that “The Good Fight” has been portraying. We are frogs in the proverbial pot, and the water is getting very warm now, but we don’t want to deal with it. So let’s instead complain about Black hobbits and write a hundred articles about the lighting in a misogynist dystopian fantasy.

To stare squarely at what confronts us is profoundly destabilizing. But at some point what other option is there? Diane Lockhart stands before us like a far more tastefully dressed Virgil at the entrance to Hell. “There is no way back, kiddo, only through.”