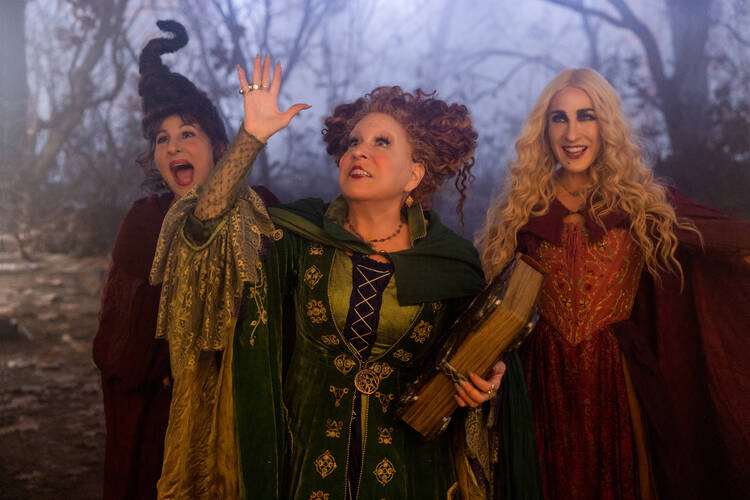 I have a confession to make: Until last weekend, I had not seen “Hocus Pocus.” In fact, to the best of my knowledge I had never once even thought about the movie.

Obviously, this is a source of great shame to my younger friends and family. But if as you read this you, too, find yourself saying, “What is this ‘Hocus Pocus’ of which he speaks?” here is what we have missed: Way back in 1993 Disney released a movie starring Bette Midler, Kathy Najimy and Sarah Jessica Parker as the Sanderson Sisters, a trio of 17th-century witches who are brought back to life in the 20th century on Halloween. They immediately set out to try to eat the souls of all the children of Salem, Mass.

Yes, you read that right, and yes, this really is a Disney film. It even begins with an 8-year-old girl having her soul devoured. (She comes back as a happy ghost at the end, so it’s O.K., I guess?) “Hocus Pocus” also featured song and dance; came out in July—you know, like Halloween movies always do—and was a total flop. Janet Maslin in The New York Times called it “an unholy mess,” aimed at what she calls “the Nowheresville between juvenile and adult audiences.”

I have a confession to make: Until last weekend, I had not seen “Hocus Pocus.” In fact, to the best of my knowledge I had never once even thought about the movie.

But it turns out that “Nowheresville” was chock-full of young millennials, who know a good thing when they see one. Over the last 30 years they, their Gen-Z siblings and others have loved the movie so passionately that it became not just a cult hit but a genuine film favorite.

It was only a matter of time before sequel plans were put into motion, particularly in our current era, in which networks are much more willing to consider rehashing old I.P. than in producing new stories. (Among the current crop of “new” shows there is a new “Quantum Leap”; a TV series starring Tim Allen’s early 2000s Santa Claus character; a “Willow” TV show; and a reality TV version of “The Love Boat.” Isaac, fix me a drink!)

In many ways, the new “Hocus Pocus” adheres to the formula of other reboots. It returns to the main plot points and gags of the first film—a virgin teenager accidentally brings the Sanderson Sisters back to life, the sisters still want to kill all the kids of Salem so they can live forever, they are also repeatedly surprised by the ways of the modern world, and succeeding at their goal involves a spell cast on the town during a big song and dance number! As with other reboots, the new film also places women and people of color in central roles, which some will no doubt complain makes it “woke” or “P.C.” but actually allows the film to go in some interesting new directions.

What is most endearing about “Hocus Pocus 2” is the way that it brings to the fore an aspect of the original film that you don’t often see portrayed today: sisterhood.

But what is most endearing about “Hocus Pocus 2” is the way that it brings to the fore an aspect of the original film that you don’t often see portrayed today: sisterhood. As much as “Hocus Pocus” was ostensibly about a group of kids and a talking black cat who band together to fight off a bunch of child-munching witches (this film really is crazy), in fact, the heart of the film was the relationship between the sisters. They are the characters featured on the posters. They’re the ones doing the “hocus pocus.” And what makes them so compelling is not simply the individual performances of Ms. Midler, Ms. Najimy and Ms. Parker (though I believe 100 percent that this is Ms. Parker’s best performance ever). Rather, the magic of the film lies in the way the three of them interact: Bette Midler plays second fiddle to no one, and yet here all three actors allow one another to shine. The script likewise has no envy or jealousy subplot, no attempt to pit the sisters against each other. From start to finish they share a common purpose and unconditionally accept and delight in one another.

“Hocus Pocus” screenwriters Mick Garris and Neil Cuthbert seem unlikely to have considered the sisters’ interactions too much when they wrote the original; the early drafts of the script were apparentlymuch more focused on the children. It was instead something that the actors found in their performances. But in approaching the sequel, screenwriter Jen D’Angelo and co-story writers Blake Harris and David Kirschner put that relationship at the center. The sisters’ love for one another figures heavily into both their backstory and the film’s unexpectedly touching conclusion. Indeed, their friendship models the relationship that the three teenage girlfriends must achieve in order to thwart the witches’ plot. Ms. D’Angelo recentlywrote in Business Insider, “After watching the movie, I hope people walk away from it wanting to call their friends and tell them how much they love them.”

In much of pop culture today, women are rarely allowed to simply be friends with one another. HBO’s “House of the Dragon” seemed headed in that direction at first, but within two episodes the show had split its female leads; five episodes later, one woman is trying to cut out the eye of the other’s son. Cable standouts like “Yellowjackets” and “Euphoria” build much of their plot around the conflicts between their female characters.

There are exceptions, of course, like Marvel’s “She-Hulk” or ABC’s “Abbott Elementary.” But these are unusual enough to further underline the issue: Female characters are generally expected to be fighting with one another.

“Hocus Pocus” succeeded because it had no such imperative. And like the scribe in Matthew 13 who knows her Scripture well, “Hocus Pocus 2” sees that its treasure lies in “things new and old.” Sure, stories need conflicts to drive them; but women supporting one another, laughing with one another and wanting to stay together can also be wonderfully compelling. “The Sanderson Sisters” isn’t just a quirky name for a coven; it’s a statement of priorities. These women may want to eat Salem’s children, but their love for each other goes on forever.

1
Exclusive: Pope Francis denounces polarization, talks women’s ordination, the U.S. bishops and more
The Editors
2
The story of ‘Carol of the Bells,’ a Christmas classic born in Ukraine
Jim McDermott
3
Jesuit Karl Rahner was one of the most influential theologians of the 20th century. But he was first and foremost a priest.
Kevin O'Brien
4
Interview: Bishop Stowe wants the USCCB to take Pope Francis’ priorities seriously
Kevin Clarke
5
Advent asks us: Have we lost our way?
Terrance Klein