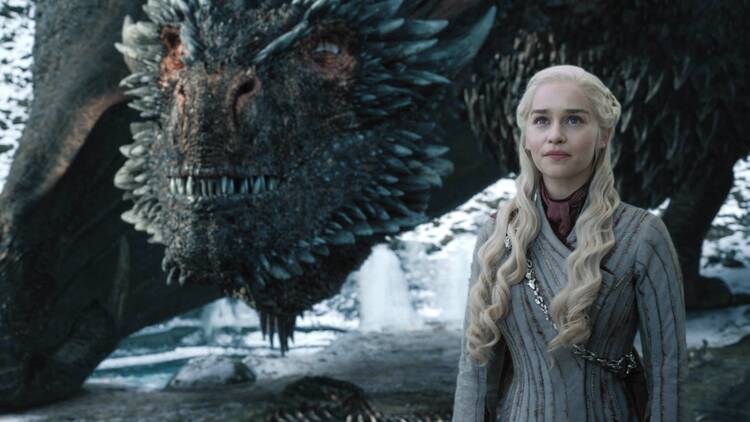 Emilia Clarke stars in a scene from the fourth episode in the final season of the HBO series "Game of Thrones." (CNS photo/HBO)

This weekend “House of the Dragon,” the long-waited prequel to “Game of Thrones,” begins its first season on HBO Max. There’s a lot of interest around the show and also considerable pressure for it to succeed as new owner Warner Bros. Discovery has started cutbacks, including this week firing 70 HBO and HBO Max employees.

From the outside a series focused on the internecine conflicts among the Targaryens and their supporters seems like a big swing. People loved Daenerys Targaryen and her three dragons, but many also felt burned (no pun intended) by the way her story ended. After seven years of working so hard to free slaves and get to Westeros and then falling in love and agreeing to stop her invasion to help Jon Snow save all humanity, she suddenly goes crazy and kills everyone in King’s Landing? What?

No doubt the showrunners of “Dragon” have taken lessons from the blowback that came with all that. Given that the series is set 200 years before “Thrones,” there is a tremendous opportunity to create a fresh take on the overall world of Westeros as well.

People loved Daenerys Targaryen and her three dragons, but many also felt burned (no pun intended) by the way her story ended.

Pope Francis has not weighed in on the new show. (As he doesn’t watch television, this is not unexpected.) But on his behalf, we have a couple of notes we’d like to share from a Catholic perspective.

Treat your female characters with respect

By far the biggest criticisms “Game of Thrones” faced in its eight-year run related to its treatment of women. Almost every female character on “Thrones” was raped, or nearly so, at some point or ended up brutally murdered or was asked to do nude scenes or all of the above.

At the end of the series, two of the show’s strongest female characters were also given storylines that did not seem to respect their journeys or their talents. As mentioned above, Dany went nuts, then she seemed headed into full fascism before being murdered by the man she loved; Cersei Lannister, one of the most clever and dangerous characters on “Thrones,” spent her final episode just watching her city burn from a distance, until her brother Jaime suddenly arrived to rush into her arms before the Red Keep castle fell in on the two of them, like characters in a Westerosi romance novel.

Producers on “House of the Dragon” have assured viewers they understand the concerns about their predecessors’ treatment of women. “We do not depict sexual violence in the show,” writer and executive producer Sara Hesstold Vanity Fair. But showrunner Miguel Sapochnik also notedin a prior interview with the Hollywood Reporter that, as their reporter put it, “violence against women is still very much part of the world.”

Pope Francis has not weighed in on the new show. (As he doesn’t watch television, this is not unexpected.) But on his behalf, we have a couple of notes we’d like to share from a Catholic perspective.

It’s unclear what exactly that means or why that has to be the case. The show is set 200 years before “Thrones.” Why couldn’t things be better for women 200 years prior to “Thrones,” rather than just the same or worse?

The Catholic Church has its own checkered history when it comes to empowering and respecting women. Learn from our mistakes, “House of the Dragon.” Offer strong, female characters who are allowed to be subjects rather than objects of the male gaze or victims of violence.

Make room for people of color

There’s a scene at the start of the final season of “Game of Thrones” in which Missandei, Daenerys Targaryen’s quietly graceful Black advisor, rides on horseback into Winterfell past watching Northerners. Catching the eye of one of those watching, she smiles. They simply stare at her. After Dany’s forces help save Winterfell, this happens again, and Missandei confides to her partner Grey Worm, who is also a person of color, that they have got to get out of there.

As much as “Game of Thrones” presented itself as a show taking place across two entire continents, there didn’t seem to be many people on the continent where most of the story took place who were not white. Other than the barely visited southern nation of Dorne, people of color were all to be found on a continent of their own, and most of them there were either slaves or pillaging barbarians.

In some ways, the deepest conflict in the last season (other than the endless army of the dead who wanted to wipe out humanity and bring on an endless night) was about race; people kept saying no one wanted Dany to be queen because she had an army of “foreigners.” But no one said the same of Cersei’s hired army of mercenaries, who came from the same continent as Dany’s army but—surprise, surprise—were white. One could also argue that having Dany and her army suddenly start killing everyone was itself an expression of American anxiety toward foreigners and people of color.

“House of the Dragon” includes among its cast a new house, Velaryon, whose family is Black. Its leader, Lord Corlys Velaryon, is in fact the wealthiest man in Westeros. That sounds promising. But if the show has anything of the breadth of its predecessor, it will need to offer much more.

The Catholic Church is only richer for the variety of cultures, races and points of view that have allowed it into their lives.

And it should want that, too. Again, take a lesson from the Catholic Church. As much as we have often failed when it comes to race and culture (such as in our treatment of Indigenous people), in point of fact the Catholic Church is only richer for the variety of cultures, races and points of view that have allowed it into their lives. Every new culture and religion has allowed the church to see other elements of who God is and what it means to be church. And in calling out our failings, people of other races and cultures have helped the church to confront its own sins and change.

[Related: Jesuits pledged $100 million in reparations for sale of enslaved persons. Descendants say progress has been too slow.]

Just as “Thrones” dug into different religions, and found so many interesting ideas there—the Ironborn were the worst, and yet I wanted to learn so much more about their Drowned God—may “Dragon” discover the wealth of story and character to be found in other races and cultures.

Beware of the seduction of dragons

One of the biggest draws of “Game of Thrones” was always the dragons. When they were little, they were adorable. (Remember how they sang?) When they got bigger, they were terrifying.

Some complained that the series used its dragons far too sparingly. Two of them ended up getting killed without ever really having become characters of their own. Some might be hard pressed to even remember their names. (To me they were Greenie and Creamie.) Dragons are like Chekhov’s proverbial gun; if you’re going to show them in Season One, you better end up using them later.

But the downside of that is that “using them” tends to mean “showing people burnt alive.” The violence done just by Drogon was truly horrific. The idea of watching two other dragons add to the body count of those burned alive in front of us is hard to imagine.

But it might not be for very long. House Targaryen in the new series has 17 dragons, nine of which will be depicted in Season One.

As much as it often repels us in real life, violence on-screen is seductive. And mass violence is strangely almost more so, whether because it is more appalling and therefore transgressive or, in some cases, because it happens on such a scale that the victims are not apparent. Superman and Zod destroyed much of downtown Metropolis in Zack Snyder’s “Man of Steel,” but they never showed us the tens of thousands of people who must have died in the process.

Even if it is just fictitious, at some point this kind of violence is not just good for the soul. Even as we can’t convince ourselves to turn away from it, in the pit of our stomach we know it’s not. Not that seeing children pushed out of windows or poisoned is a trip to the M&M Store either. It would be great to see the writers of “Dragon” challenge themselves more generally to find ways of being gripping without brutally murdering people in front of us.

In the end this isn’t a matter of tut-tut prudishness for us Catholics, either. We believe that everything is imbued with the grandeur of God, that everything has its own dignity and is worthy of respect and wonder. Just as we hope that “House of the Dragon” will better reflect the majesty and variety of its female characters and persons of color, we hope it can see its dragons as more than just plot devices writ large, weapons of mass destruction with attitude. They are characters in their own right, a fact that “Thrones” did next to nothing to consider. (I can tell you more about Nymeria, a dire wolf who appeared in three episodes, than I can about Rhaegal (a.k.a. Greenie), a dragon who appeared in 23.)

All in all, some aspects of “Game of Thrones” might leave us entering into “House of the Dragon” with apprehension. But as Tyrion Lannister might have said (but far more cleverly, and while drinking), Past failings are present opportunities. When it comes to Westeros, there’s so much still to explore.