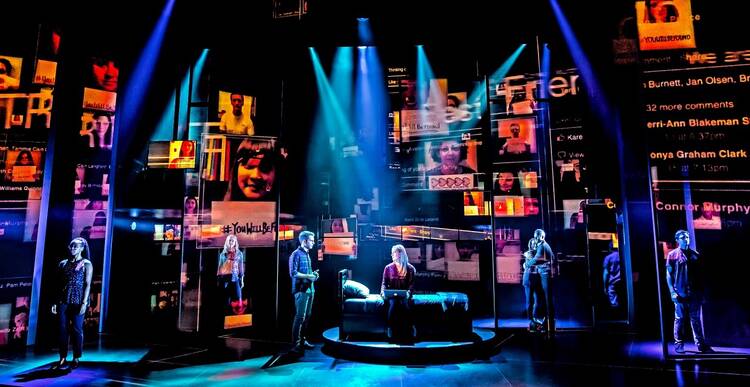 On Sunday, Sept. 18, “Dear Evan Hansen” finished its Broadway run. It was a smash hit by any standard: The show ran for six years and 1,678 performances in New York, and also transferred to London and a national tour; it won six Tonys; it had three songs that gained so much mainstream popularity that whether you know the show or not, you have likely heard them; and it was turned into a movie lightning fast by Hollywood’s standards.

It also became a touchstone in the ongoing conversation about the mental health of young people today. The story, which concerns a socially anxious teenager who is mistakenly believed to be the only friend of school bully Connor Murphy after Connor commits suicide, received universal acclaim. Critics lauded the show’s portrayal of Evan and the other teenage characters, each of whom struggles to navigate the endless echo chamber of social media and an abiding sense that no matter what they do, as Evan sings in the show’s most well-known song, they are “on the outside, always looking in…waving through a window.”

On Sunday, Sept. 18, “Dear Evan Hansen” finished its Broadway run. It was a touchstone in the ongoing conversation about the mental health of young people today.

In a recent interview with American Theatre, “Hansen” producer Stacey Mindich remembers her surprise at that acclaim. “In early marketing meetings, we had stayed away from terms like ‘depression’ and ‘mental health,’” she recalls. “‘The suicide musical [is] not exactly an incentive to buy a ticket.”

But she and the creative team kept having the experience of people coming up to them and saying “I am Evan Hansen” or “I am Zoe Murphy,” the girl Evan secretly loves, who has spent her life contending with her older brother’s serious mental health issues. The actor Hugh Jackman, who Mindich says was “a regular” at the show early on, sang “You Will Be Found” on his 2019 world concert tour, and shared how it made him think of himself at 8, feeling “about as vulnerable as I ever felt in my life.” For so many people, the show offered understanding and reassurance. “You are not alone,” the cast sings over and over at the end of the first act. “You will be found.”

For me, though, what was compelling about the show is the ways that it undermined aspects of that message of self-affirmation, even as it also offered them. Composers and lyricists Benj Pasek and Justin Paul and book writer Steven Levenson give “You Will Be Found,” which Evan sings to an auditorium full of students who believe he knew Connor, exactly the kind of earnest transparency of so many great pop anthems. But in fact Evan has never experienced this kind of connection.

“You are not alone,” the cast sings over and over at the end of the first act. “You will be found.”

The show makes a special point of emphasizing this from the beginning. “It’s a funny story, actually,” he tells his classmate Jared about the broken arm he got over the summer when he fell from a tree. “There was a solid 10 minutes after I fell where I just lay there on the ground, waiting for somebody to come get me. I was like, any second now, I kept saying that to myself, any second now here they come.” But no one ever did. Late in the show Evan reveals to his mother that he actually didn’t fall at all, he was trying to kill himself, underlining just how not-funny any of this is.

The only friendship Evan seems to have, in fact, is the fictitious relationship he imagines having with Connor. The first time he comes to the Murphy house, overwhelmed by his own parents’ questions about Connor, Evan sings the exquisite “For Forever,” in which he reimagines the day he tried to kill himself as an idyllic summer afternoon that he and Connor spend sharing all their private thoughts at an apple orchard that the Murphys used to visit. “All we see is sky for forever,” Evan “remembers.” “We let the world pass by forever…two friends on a perfect day.” And this time when Evan falls, Connor is there to help him. “He’s come to get me/ And everything’s okay.”

As the show continues Connor reappears periodically as Evan’s imaginary friend, and becomes the one person in whom Evan can truly confide. Evan even starts to dress like him. But again, he’s not real. None of this is real.

I hope future productions will continue to explore the show’s messy complexity and its absolute allergy to pat answers and cheap grace.

The positive reaction Evan receives to the hopeful reassurance of “Found” quickly grows suspect, too. Midway through the song, all around the set–which consists largely of screens showing ongoing social media feeds—people begin resharing clips of Evan singing, along with comments praising his courage, sharing their own pain and celebrating Connor like they knew him when no one did. Their numbers quickly swell into the tens of thousands. Swept up in the moment, these strangers pick up Evan’s song, until an entire choir of voices is singing it to themselves and one another. The harmonies are gorgeous, the feelings heartfelt. But it gets so big so fast, you can’t help wondering: How deep do any of these feelings go?

In the second act, Evan and the other characters are confronted by some of that dishonesty beneath the surface, the ugliness that lurks within them alongside their pain. A lot of it is hard to watch; with the exception of Zoe, who is from start to finish a truly great human being, everyone here has deep, irresolvable flaws. We are all a mess of not just our highest aspirations but our worst choices, the show suggests. And the writing struggles with the full implications of that truth: Though Evan eventually admits to Connor’s family that he has been lying to them, the musical can’t quite bring itself to force him to reckon with the pain he has caused.

But perhaps there’s intentionality in the choice to exclude such a moment. Wouldn’t some kind of redemption arc for Evan constitute another sort of anthem, another of the “happily ever after” fantasies that we already too easily accept? No matter what the pop songs might tell us, when it comes right down to it, forgiveness often is unable to be earned. It can only be offered.

For many, the legacy of “Dear Evan Hansen” is going to be that life-affirming message of Act One. And that’s great; the show has helped many people, and as it now becomes more available for schools and community theaters to perform, it will no doubt reach and affect even more.

But what I hope future productions will continue to explore is the show’s messy complexity and its absolute allergy to pat answers and cheap grace. Growth is hard and slow. And when it finally comes, as it does for Evan in the end, it no longer needs the packaging of a swelling choir or perfect pitch.