I wrote the first full history of Black Catholic nuns in the U.S. Here’s what I learned. 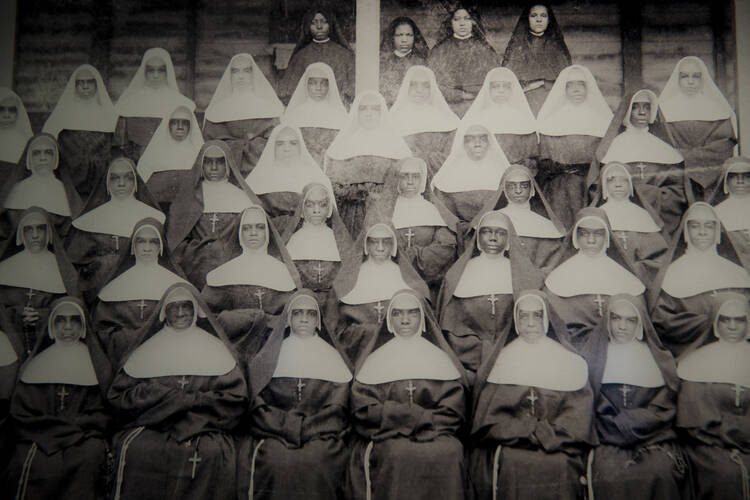 An undated photo of the Sisters of the Holy Family in New Orleans from the National Museum of African American in Washington. (CNS photo/Tyler Orsburn)

After Hannah Beachler became the first African American to win an Academy Award for production design in 2019 for her work on the hit Marvel film “Black Panther,” she offered a word of encouragement in her acceptance speech that I believe every serious writer should take to heart.

“Never give up,” Beachler declared. “And when you think it’s impossible, just remember to say this piece of advice I got from a very wise woman: I did my best, and my best is good enough.”

When I submitted the final manuscript for Subversive Habits: Black Catholic Nuns in the Long African American Freedom Struggle this past winter, I looked up from my computer screen and repeated this important mantra to myself. Then I walked to my room, sat on my bed and cried for three hours straight.

Writing a book is one of the most difficult things a person can do. Surrendering that work to the world is even harder.

Writing a book is one of the most difficult things a person can do. Surrendering that work to the world is even harder. This is especially true when one’s work focuses on a topic that has been systematically denied.

In the 14 years that it took me to research and write the first full history of Black Catholic women religious in the United States, I experienced the gamut of human emotions—from the unbridled joy a scholar feels when making unexpected discoveries in an archive to the righteous indignation of being confronted with evidence of the intentional suppression of facts to the crippling self-doubt that I suspect every writer battles with when finally forced to sit down and actually produce a manuscript. The great sacrifices of time and togetherness with family and friends that were required also took a significant toll.

I would be lying if I said that I have gained some new and profound insights about life or writing now that I am on the other side of the process. But what I absolutely know is that the journey one must take to write a book worthy of publication, and the lessons learned from that journey, are utterly transformative.

In addition to becoming intimately aware of their many quirky and annoying habits of procrastination and self-sabotage, authors learn to become extraordinarily patient with themselves, their thinking and writing processes and their countless failures. Anyone tasked with researching and writing a “hard history” also quickly learns to develop an iron jaw and carry lots of salve for the inevitable encounters with those who are invested in maintaining the multitude of myths that undergird human history.

So many people, including archivists and scholars, told me that my project was a fool’s errand, that there was no meaningful story of Black Catholic nuns in the United States.

Perhaps most important, writers learn to accept the painful truth that some stories must be left unwritten (at least temporarily) for the sake of time, space and nonnegotiable word limits set by publishers. Revisions and cuts in book drafts always bleed and leave their own special scars. Ultimately, though, the journey of writing my first booktaught me the indomitable power of self-awareness, self-determination and historical truth-telling.

When I began working on my manuscript in 2007, I encountered what seemed like an endless stream of discouragement. So many people, including archivists and scholars, told me that my project was a fool’s errand, that there was no meaningful story of Black Catholic nuns in the United States, that white nuns were not willing or violent slaveholders and never deliberately excluded women from their communities because of race and color, and many other falsehoods.

In many instances, I recognized that those who doubted my research’s viability knew very little church history, and even less Black and Black Catholic history. In other cases, though, this denial reflected the painful reality of anti-Blackness and discrimination that has actively worked over the years to misrepresent or altogether erase Black sisters’ footprints in American history.

I still vividly recall the distinguished theologian and nun who, in 2011, told me in a room full of scholars and lay people that there were “anthropological” reasons why white nuns did not want to live with Black women and girls called to consecrated life. This was after she begrudgingly acknowledged the history of racial segregation and anti-Black exclusion in women’s religious life. That moment and its aftermath poured gasoline on an intellectual fire that still burns in me today.

The journey that followed also affirmed to me what the great Nobel laureate and Catholic writer Toni Morrison once said to aspiring authors: “If there is a book you want to read, but it hasn’t been written yet, then you must write it.”

And write it I did.

[Related: A vocation with purpose: The new reality for religious sisters]

Shannen Dee Williams is an associate professor of history at the University of Dayton. Her first book, Subversive Habits: Black Catholic Nuns in the Long African American Freedom Struggle, will be published by Duke University Press in May 2022. Twitter: @BlkNunHistorian.

@BlkNunHistorian
Show Comments ()
Join the conversation: Login or create an account
Before you can comment, you need to update your profile to include your first and last name, as required in our comments policy. Then reload this page and you'll be set up for commenting. Update your profile