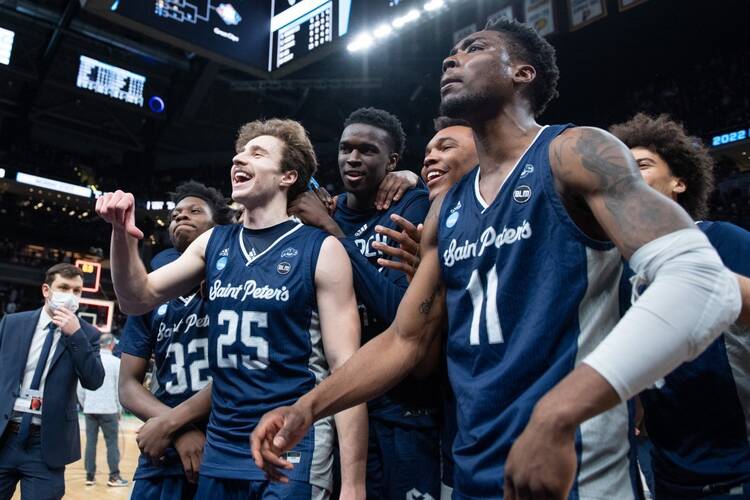 Facebook has taken its lumps as a company and a community in the press over the past few years, and rightly so; we here at America have gotten our licks in as well. But we should also give credit where credit is due. One saving grace during the past two years of pandemic has been our ability to continue the Catholic Book Club in its online discussion form on Facebook. In a time when many of our in-person book clubs or other social interactions (when’s the last time you went inside a library?) were severely restricted, we still have had a place to chat about books.

We discussed three over the past six months, each from a different genre and offering unique perspectives. First, we read Kirstin Valdez Quade’s award-winning debut novel, The Five Wounds. Next we had a bit of a double-header: We knew we wanted to read John Gasaway’s history of Catholic college basketball, Miracles on the Hardwood, but our Catholic Book Club moderator, Kevin Spinale, S.J., had a thought: Why not also read famed Georgetown University hoops coach John Thompson Jr.’s memoir, I Came as a Shadow? Father Spinale’s instinct was correct—the two books complemented each other well.

All three books were reviewed in America in the past year as well, offering readers a primer on what to expect (though hopefully no spoilers!). Father Spinale also offered interpretive essays on the books and included discussion prompts for each.

The Five Wounds “reminded me of the works of Flannery O’Connor,” commented Daniel Petruccio.

In her review of The Five Wounds, Jenny Shank noted that the novel had its origins in a short story published 13 years ago. In 2009, Kirstin Valdez Quade published a story in The New Yorker about a man named Amadeo Padilla, who wanted to play the role of Jesus in his New Mexico community’s annual penitente procession and crucifixion ritual. Why? To find absolution for his sins, and perhaps redemption in the eyes of his family and community.

“In her second book and first novel, The Five Wounds, Valdez Quade returns to that story and expands it into a tale of five generations of a Catholic family in New Mexico during the year of their fleeting overlap,” Shank wrote. “While the short story dazzled with its humor, verve, bold use of Catholic imagery and shocking action, the novel settles in, lets the virtues and contradictions of its characters unfurl and offers profound insights about how the stability of even a tension-filled family can serve as a saving grace for each member.”

Many readers connected with the humanity and struggles of Valdez Quade’s characters. “This book made me think a lot about various painful situations I have lived through,” commented Liz Latorre. “While my experiences were very different from the characters, I found common ground when I thought about the possible value of pain.” Julie Griffin appreciated the way that the character of Amadeo Padilla, “not the most astute of thinkers,” nevertheless was able to discern in the end that “his pilgrimage/procession was really all about love” rather than vanity or needless suffering. But not everyone was a fan. “I loved Valdez Quade’s collection of short stories, including the one on which this novel was based, and so was looking forward to reading The Five Wounds, but what a snoozer it turned out to be. Self-indulgent tangents, characters that took forever to go anywhere,” wrote Andy Simons. “Too predictable, with a very unrealistic Hallmark ending,” wrote Michael Grout. Others objected to the occasional graphic sexual content of the novel; I’m glad we chose it over Lady Chatterley’s Lover.

“This work reminded me of the works of Flannery O’Connor,” commented Daniel Petruccio.“The flawed nature of all the characters and the ultimate moment of grace; also the constant theme of our need for relationships in our life. I kept reminding myself that we are all broken in some way and without grace we can’t fix ourselves.”

This year’s N.C.A.A. Division I Men’s Basketball tournament provided a nice bonus for fans of Miracles on the Hardwood, as several Catholic colleges pulled off major upsets in the opening days.

Miracles on the Hardwood

Of the 5,300 colleges and universities in the United States, 221 are affiliated with the Catholic Church. That’s just over 4 percent of the total. Yet in the 2021 N.C.A.A. men’s basketball tournament, eight of the 68 teams were Catholic—almost 12 percent of the total. On this year’s “Selection Sunday” on March 13, the top-ranked team in the country was Catholic (Gonzaga); four others were in the top 25.

Why are Catholic schools so good at basketball? John Gasaway explores a number of reasons in Miracles on the Hardwood: The Hope-and-a-Prayer Story of a Winning Tradition in Catholic College Basketball. He also celebrates some great moments and stories, from U.S.F.’s back-to-back national championships in the 1950s to the thrilling March Madness runs of Villanova in the 1980s, Loyola Marymount in the 1990s and Loyola Chicago in recent years.

“It is because of Catholic education: the whole top-to-bottom, grade school-through-graduate school behemoth that keeps going along as best it can,” offered Father Spinale. “And at each level, in almost every main building, there is a basketball gym. Each junior high and high school has a court, and a team with little cost and maintenance save that of redoing the floors every year or so. Catholic college basketball represents the fruit of all the competition and fun that happens in those gyms at the heart of Catholic schools throughout this country.”

This year’s N.C.A.A. Division I Men’s Basketball tournament provided a nice bonus for fans of Miracles on the Hardwood, as several Catholic colleges pulled off major upsets in the opening days. No team provided greater thrills than the St. Peter’s Peacocks of Jersey City, N.J., who shocked #2-seed Kentucky in the first round before knocking off Murray State to advance to the Sweet Sixteen. Other Catholic schools with a shot at the title included #1-ranked Gonzaga (despite a second-round scare against Memphis), Villanova and Providence.

In I Came As a Shadow, Thompson gives an unvarnished view of what it was like to coach at Georgetown—including the racism that he and his Black players endured from friend and foe alike.

I Came as a Shadow

The most prominent coach at a Catholic college for many years was John Thompson Jr., whose Georgetown squads in the mid-1980s are legendary and who remains something of a dean of college coaching. In I Came As a Shadow, Thompson gives an unvarnished view of what it was like to coach at Georgetown—including the racism that he and his Black players endured from friend and foe alike.

In his interpretive essay, Father Spinale noted that “N.C.A.A. men’s basketball remains a sport where a majority of players at prominent programs are Black, but the vast majority of coaches are white. Have things changed since Thompson’s time on the sidelines, or are we still seeing more of the same?”

One reader noted that the “one-and-done” phenomenon where a player leaves school after one year to go pro means that players who might make excellent coaches do not always have the luxury of four or five years of experience learning how to be a college coach. “These players are leaving college, maybe without even graduating, or making any serious attempt at higher education,” wrote Brian Lennon. “I don’t feel today’s players are being properly taught and groomed to become NCAA head coaches.”

While the N.C.A.A. has made some progress in recent years, the numbers are still dismal: More than 50 percent of Division I Men’s Basketball players are Black; less than 30 percent of their coaches are. “I’d like to think things have improved,” wrote Liz Latorre, “but deep down I am afraid they are largely the same.”