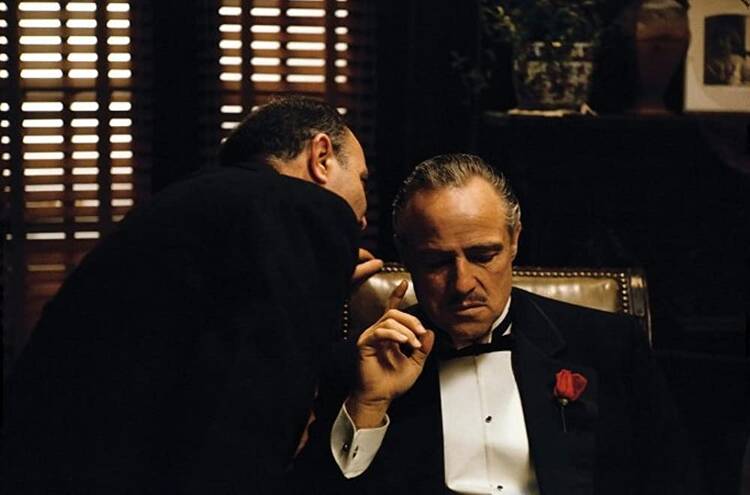 Marlon Brando as Vito Corleone in 'The Godfather' (IMDB)

Editor’s note: “The Godfather” was released 50 years ago this month. This review appeared in America on March 25, 1972. The original grammar and style elements are preserved here.

Often films set at some distance lend a perspective to the here and now; they allow us to step back from our everyday skin to see who we really are. Bergman, for example, used a medieval knight in The Seventh Seal (1956) to reveal the crisis of faith in post-Christian Europe, and Robert Gardner, in Dead Birds (1963), used a primitive tribe of warriors in New Guinea to reveal the pathetic madness of a people, who like ourselves, have come to accept war as a normal way of life. And now The Godfather. How remote from actual experience, this world of violence and treachery, and yet how close to the soul of modern man.

With The Godfather, Francis Ford Coppola, at 33 years of age, has become a major new talent among American directors.

The mafiosi, murderers and extortionists all, emerge from the film as believable people, when they might easily have become comic gangsters or monsters. Their world tips wildly from the orbit of normalcy; it is a closed world, where their ghastly brutal work is considered an ordinary way to support a family. In the idyllic Sicily sequence, the quaint customs, the fierce family loyalties and the rigid patriarchal formality have a rustic lovely charm; in the New York underworld they are pathetic anachronisms. Yet it is precisely these grotesque rural customs that humanize the members of the famiglia. They are human in the midst of a sordid world, and they do what they must to survive. That is their way, and perhaps the way of all of us.

Don Vito Corleone, meaning lionhearted, is an aging racketeer whose empire and health both show the stress of old age. Brando brings depth and sensitivity to the part, but because of his long established “star” quality he has taken too much of the prerelease publicity. Al Pacino, as his son Michael, gives a virtuoso performance which should bring him instant recognition. He is an idealistic college graduate, marked for a career in the foreign land outside the mob, but gradually the destructive world of his father overwhelms him in its evil. He matures both in humanity and ruthlessness to become a calculating killer and worthy heir to the Don's empire.

At three hours, The Godfather is by any reasonable standard too long to sustain interest, but most viewers will be sorry to see it end.

With The Godfather, Francis Ford Coppola, at 33 years of age, has become a major new talent among American directors. Two sequences in particular are set pieces of editing and directing, and are even more remarkable because of their different styles. During a baptism at which Michael is godfather, his men plan and execute a series of assassinations designed to consolidate his power over the other famiglie. The ceremony drags on endlessly, but the intercutting of the preparations for the murders builds a palpable tension. The explosion of violence at the end of the sequence snaps the tension; it is almost a relief to end it all despite the horror of the bloodletting.

The second sequence, by contrast, is a tender, loving family portrait of Don Corleone and his infant grandson playing together in the garden of his estate. The Don is weak, but with his grandchild he appears perfectly at peace with himself. At this moment, when he appears most fully human, he dies quietly and gently, alone with his grandchild and his flowers. Alone, each of the two scenes is a cameo of directorial art; together they show Coppola's immense versatility.

Nino Rota, who prepared the music for all of Federico Felliní's great films, blends Italian folk themes and America kitsch of the 194O's into an effective comment on the dramatic action.

At three hours, The Godfather is by any reasonable standard too long to sustain interest, but most viewers will be sorry to see it end.

Richard A. Blake, S.J., served as managing editor and executive editor of America and director of the Catholic Book Club, as well as America's regular film reviewer for many decades. He is the author of Afterimage: The Indelible Catholic Imagination of Six American Filmmakers, among other books.