From ‘Ted Lasso’ to ‘Squid Game’ to ‘Midnight Mass,’ 2021 was a strange but wonderful year in TV 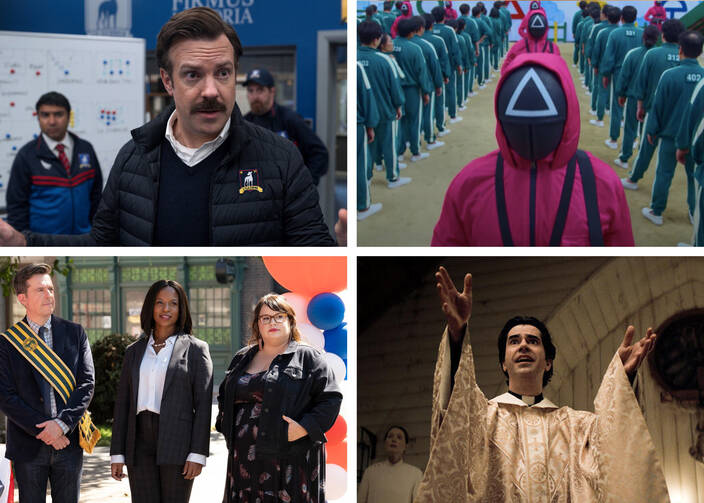 The year 2021 was a strange one for TV. The best shows in 2020 seemed to be whatever got you through the pandemic—your favorite sitcom or sci-fi series from 20 years ago, in addition to a few crowd pleasers like “The Queen’s Gambit,” “Tiger King” or “I May Destroy You.” But in 2021, as most things returned to some measure of normality, there seemed to be fewer series to watch, or fewer worth watching.

For instance, where were the great British imports of 2021? There was “All Creatures Great and Small,” the reboot of the BBC’s beloved series about James Herriot’s work as a rural veterinarian, but beyond that, not much seemed to stand out.

In 2021, there seemed to be fewer series to watch, or fewer worth watching.

And where were this year’s water cooler series? Yes, we had “Squid Game,” Netflix’s Korean horror drama about poor people who are trapped, fighting to survive a game that will either kill them or make them rich. But within a month conversation about it was pretty much over. Netflix’s carpet-bombing strategy of TV programming, in which they drop everything all at once, continues to work both for it and against it.

The one notable exception seems to be “Midnight Mass,” whose story about a mysterious Catholic priest who wants to save an island fishing town only continued somehow to build buzz as the months went on. It is also the first show I can remember whose fans have generally not spoiled the surprises. The storytelling was just so unexpectedly satisfying, it seems as if we did not want to take that away from anyone.

The only other series with a similar level of audience appreciation this year was “Ted Lasso,” which went from a series you kept hearing about (but no one was watching because it was on Apple TV+) to almost total domination of the pop culture zeitgeist. Everywhere you looked, this sweet little series about an ultra-positive American football coach working as a soccer manager in Great Britain generated gushy regard, think pieces and in some quarters, unexpectedly, enormous criticism. Even as it started to dig into various characters’ trauma and frailty, critics and some viewers wondered whether the writers had replaced any sense of plot with just warm feelings. It made the final episodes all the more satisfying, as—spoiler alert—Nate transformed from an insecure but brilliant assistant coach into a gray-haired, white-hot flame of rage who looks poised to destroy everything Ted stands for.

“Only Murders in the Building” is deeply grounded in the lives and struggles of its characters.

Only one new series in 2021 seems to have similar potential to burst into the mainstream in its second season: “Only Murders in the Building,” Hulu’s quirky dramedy about Steve Martin, Martin Short and Selena Gomez as three lonely people living in the same New York building, who discover they are all obsessed with the same true crime podcast, and then set out to make one of their own after someone in their building mysteriously dies. I know I am in the minority, but generally I don’t have much time for the slapstick of Martin and Short. It is always clear they are having a good time, but I find that rarely translates to me having a good time, too.

But that is what made “Murders” so exciting to watch: While there are some classic Martin and Short comedic moments, overall the series is deeply grounded in the lives and struggles of its characters and is filled with pathos. It is the best performance from Steve Martin that I have seen in decades, and maybe the best ever from Short, other than his brief, disturbing turn as a canceled predator in Apple TV+’s “The Morning Show.”

Mystery shows are hard to sustain; really, how many murders can you have in just one building? But in this era, when a full run of a series is often just three or four years, “Murders” looks poised to thrive.

2021 seemed like the year of the miniseries—shows with runs of just five or six episodes.

More than anything, 2021 seemed like the year of the miniseries—shows with runs of just five, six or seven episodes. Ten years ago, such a trend would have been unheard of, but 2021 seemed to be the year when eight episodes started to seem the outside of just right, and 16 or more a zombie nightmare from which we ran away. The traditional 22 episode network series isn’t dead yet, but in a market (and awards seasons) dominated by successful smaller prestige series like “Mare of Easttown,” “The White Lotus” or the endearing post-apocalyptic “Sweet Tooth,” one does begin to wonder.

One unhappy pattern I find in these shorter run shows seems to be a willingness on the part of the creators to start with a pilot that doesn’t explain why we should watch the show. The pilot of HBO’s “Mare of Easttown” seems to be mostly a platform to demonstrate that Kate Winslet can do a Pennsylvania accent. The first episode of “Halston,” about the famous fashion designer, likewise seems dead set mostly on proving to us that Ewan McGregor can portray a believable gay man. (Spoiler: He can’t, at least not in the pilot.) Thank God Krysta Rodriguez shows up as Liza Minnelli 15 minutes in to give what is a bland and mostly lifeless effort some humor and pizzazz.

“Underground Railroad” is a series that received a lot of attention for its portrayal of slaves who escape captivity in Georgia by way of an actual underground railroad. But despite its significance as a story and its pedigree as a creation of Oscar-winner Barry Jenkins, I found its violence early on so over the top as to be virtually unwatchable.

“Succession” invites us to delight in characters who refuse to escape their own personal hell.

In many ways, the brilliant and quirky sitcom “Rutherford Falls” on Peacock tried to cover similarly painful territory, the centuries of mistreatment of Native people, and yet was much more compelling by virtue of its comedic light touch and its wonderful cast of Native characters. The story, which centers on the relationship between the white descendant of the founder of the eponymous town, his Native best friend who runs a small art museum in the local reservation casino and the C.E.O. of the casino, is endlessly charming but also quietly insightful. Thus far, Peacock seems to have less reach than the other streamers, but I can only hope that “Rutherford” continues to find an audience. If “The Good Fight” is the series that has best captured the experience of being a liberal during the last four years (and oh, is it good!), “Rutherford” seems poised to be the show that imagines a way forward for us all together.

The biggest theme of the year seems to be the question whether there is still any “us” to which we might turn. While “Lasso” and “Rutherford” are built upon the belief that beneath our differences we are all just good people, shows like “The White Lotus,” about a group of mostly white tourists at a Hawaiian resort, or “The Chair,” about the first female chair of an Ivy League English department, suggest that society is at worst a veneer used to hide white privilege and at best terribly, terribly fragile. Watching Sandra Oh’s Dr. Ji-yoon Kim pour herself out trying to protect all her professors, inspire her students and raise a daughter—while everyone around her is acting out of ever-deepening outrage or self-interest—is painful to watch. In the end, both series—and “Midnight Mass” and “Squid Game” as well—suggest the only way to be happy is to get out or run away.

I wonder what one should make of the fact that the most talked-about series on television, HBO’s juggernaut “Succession,” which marries “King Lear” to the Murdoch family and its media empire, invites us to delight in characters who refuse to escape their own personal hell. Maybe it satisfies our desire to see the wealthy 1 percent—who have so much power and almost no care for the others or the future—hoisted by their own petards, that tried and true schadenfreude. But at some point the endless machinations grow tedious. Yes, some people are terrible, or at least some of the time. But in the end, at least by this year’s TV standards, it is a lot more satisfying to watch them try to overcome their often overwhelming self-interest, and to believe that there is, in fact, a way out together.