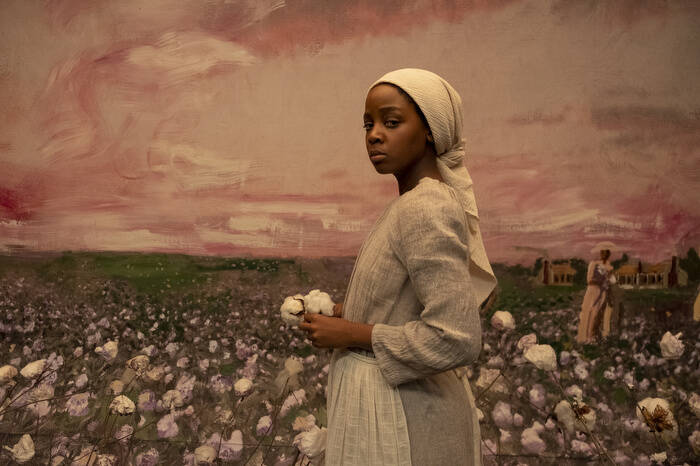 Drama is a laboratory of human nature, a realm where writers and actors can safely explore the further reaches of behavior and its implications, and audiences can experience the catharsis of their thought experiments. What if an aging king divided his inheritance among children of varying loyalty, only to set off an apocalyptic war of all against all? What if a New Jersey mafioso struggled unsuccessfully to keep his family and his business separate? What if a mother felt driven to kill her own children out of jealousy over her husband’s infidelity?

When a fictional work deals with a historic crime, though, the space of drama isn’t quite so safe, and the range of its imagination is more circumscribed by horror. To tell stories about the Holocaust, say, or about slavery in America, is to play with live ammunition—with events so egregious and weighty, with consequences that still resonate powerfully among the living, that there is even a question about whether such subjects ought to be dramatized at all.

‘Undergound Railroad’ executes a breathtaking high-wire act, threading speculative fiction a history most of us still do not know well enough.

This question throbs urgently throughout “The Underground Railroad,” a stirring, gorgeous, harrowing new Amazon Prime miniseries from the director Barry Jenkins (“Moonlight,” “If Beale Street Could Talk”), adapted from Colson Whitehead’s acclaimed 2016 novel. For in tracing the odyssey of a runaway slave, Cora, from a plantation in Georgia to a seemingly idyllic, Black-run farm in Indiana, the series executes a breathtaking high-wire act, boldly threading speculative fiction bordering on sci-fi into a history most of us still do not know well enough. The result is a vibrant, truer-than-fiction American mythology, a remix that surpasses the original tune.

To give away the novel and the show’s biggest gambit, revealed startlingly at the end of the first of its 10 episodes: Whitehead’s novel reimagines his title image as a literal underground railroad, with engineers and dining cars, rolling undetected under the Southern states, and accessible via secret passageways under trap doors. As in real life, it is facilitated with the clandestine support of a network of sympathetic white folks, but it was built and run by, and on behalf of, enslaved Black people.

To tell stories about the Holocaust, say, or about slavery in America, is to play with live ammunition.

The “Twilight Zone”-esque fictions do not stop there: The first place that Cora (Thuso Mbedu) and her partner in escape, Caesar (Aaron Pierre), come to is a South Carolina town in which formerly enslaved people are dressed, educated and entertained exquisitely by zealous white do-gooders, who turn out to have horrifying eugenic aims. Cora’s next stop is the purportedly all-white republic of North Carolina, in which a theocratic regime has enacted a statewide ban on all Black people, even enslaved ones, ritually murdering any it finds and stringing up their white enablers.

These and other poetically exaggerated scenarios seize the what-if imperative of drama to illuminate resonant truths about Black life in America, from the slavery era up to the present: for instance, the way the scourge of white paternalism is as toxic to Black flourishing as outright hostility. Later Indiana chapters illustrate how segregation and separatism can at best only throw a thin veil over the scourge of racism, with the implicit threat of violence ever present.

Magic realism doesn’t often ground itself so firmly in the realism side of the equation.

The central relationship of “The Underground Railroad,” surprisingly, is not between Cora and the beautiful, sad-eyed Caesar, or with a later paramour, the sober and heartful Royal (William Jackson Harper). It is instead her long, multi-state entanglement with Ridgeway (Joel Edgerton), a slave catcher possessed of both preternatural bloodhound instincts and a florid, self-justifying rationale of manifest destiny and the white man’s burden. Ridgeway pursues and intermittently catches Cora and haunts her nightmares, and he likewise dreams of her. There is even a striking moment where an image of Ridgeway’s face dissolves slowly to Cora’s, superimposing their visages and suggesting a terrible spiritual kinship.

This is on one level a typical cat-and-mouse trope, in which the hunter and the hunted are yoked together by their journey on a common path. It is also something more: Ridgeway represents Cora’s key experience with white America, which wants her either captive or dead. It is remarkable how much suspense, dread and complicated emotions the series generates between this unevenly matched pair, and the resolute Mbedu and sneakily low-key Edgerton are almost unbearably good in these roles.

Indeed, it is amazing that Jenkins makes some of the material of “The Underground Railroad” watchable at all. Magic realism doesn’t often ground itself so firmly in the realism side of the equation, as it does here, with results as invigorating as they are unsettling. Working with the cinematographer James Laxton and the composer Nicholas Britell, both of whom worked with him on “Moonlight,” Jenkins conjures a sun-drenched South teeming with trilling insects and lurking terrors, and a North of rolling greenery and hidden pitfalls. Moving at a pace and scale that feels more cinematic than TV-episodic, Jenkins is as unafraid to linger on moments of contemplation and equivocation as he is unflinching in depicting the depredations of slavery and white supremacist violence.

Fair warning: The graphic violence of the first episode works as a kind of intense hazing to prepare us for further horrors to come. I have a colleague who told me it took her four hours of stopping and starting to get through that first episode; viewers might be forgiven for bailing out before that.

For those who stick around, the series has ample rewards: in its indelible lead performances and mood-altering stylization, as well as in the flesh and blood it gives to a familiar argument, recently popularized by the 1619 Project and running through the work of thinkers from James Baldwin to Ta-Nehisi Coates: that African Americans, as one preacher puts it late in the series, “cannot escape slavery. It will always be with us.” This is equally true of white America. Whether that history can be transformed into a story of perseverance and triumph, of overcoming and forgiveness, rather than abjection, misery and spite—that is partly up to the storytellers. The rest is up to us.