The history of a Christmas classic, ‘O Come, All Ye Faithful’ 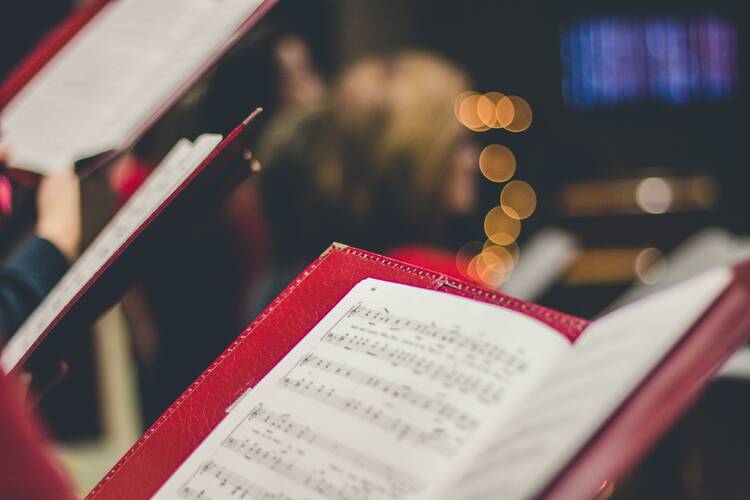 All over the world this Advent and Christmas season, worshippers will hear and sing along to some version of “Adeste Fideles.” It is traditionally the final anthem during Midnight Mass at St. Peter's Basilica in the Vatican, just as “O Come, All Ye Faithful,” its English-language counterpart, is omnipresent at more modest Christmas celebrations. But where did it come from, and why is it so popular?

A call to worship, the Latin hymn’s words Venite, adoremus (“O come, let us adore him”) are familiar from liturgies for Advent, Christmas and Epiphany. And part of the song reproduces the Nicene Creed, a Christian statement of belief widely used in liturgy.

The Irish musicologist William H. Grattan Flood concluded that the words and music of the song “go back to the first quarter of the 18th century, and are to be attributed to a Catholic source and for Catholic worship.” The song was described by Dom John Stephan, O.S.B., as having “something Handelian about it.”

Although its exact sources and origins remain unproven, musicologists agree that the hymn was first associated with the 18th-century Catholic layman and music copyist John Francis Wade. He lived in an English Catholic community that was exiled to France after the failed Jacobite rising of 1745. That rebellion tried to restore a Catholic monarch, Charles Edward Stuart, known informally as “Bonnie Prince Charlie,” to the throne of England. The UK musicologist Bennett Zon claimed that the hymn can be interpreted as a call to arms for faithful Jacobites to return with triumphant joy to England (Bethlehem) and venerate the king of angels, that is, the English king (Bonnie Prince Charlie).

A call to worship, the Latin hymn’s words Venite, adoremus (“O come, let us adore him”) are familiar from liturgies for Advent, Christmas and Epiphany.

Even if this argument fails to convince, “Adeste Fideles” is identified in legend with Catholic creators. One such mythical attribution is to King John IV of Portugal, a 17th-century amateur composer whose works were reportedly destroyed in the Lisbon earthquake of 1755. In addition to “Adeste Fideles,” he also supposedly wrote a setting of the “Crux Fidelis” (Faithful Cross), a hymn used on Good Friday during the adoration of the cross and in the Liturgy of the Hours during Holy Week. However, the same “Crux Fidelis,” a confident melody in a major key, first appeared in France in the 19th century, which is when most experts agree it was written.

“Adeste Fideles” was known in England for a time as “the Portuguese hymn,” because in the 18th century it was performed at the Portuguese embassy chapel in London. At the time, Latin hymns were looked upon with disfavor as papist by Anglican authorities.

The hymn was also attributed to anonymous Cistercian monks, the order that branched off from the Benedictines and shunned musical embellishment. Perhaps the plainness of “Adeste Fideles” made some early listeners recall simple Cistercian chants.The text itself was assigned by some, improbably enough, to St. Bonaventure, the 13th-century Franciscan theologian.

Although its exact sources and origins remain unproven, musicologists agree that the hymn was first associated with the 18th-century Catholic layman and music copyist John Francis Wade.

Essential to the hymn’s ongoing popularity was its translation into English. The most influential of dozens of attempts was in 1841, by the Anglican priest Frederick Oakeley. Four years later, Oakeley became a Catholic, following the example of Cardinal John Henry Newman, whose community in Oxford he joined. A prolific author of lucid and concise manuals, including Catholic Worship (1872) and The Ceremonies of the Mass (1855), Oakeley referred to his books as “this little work” or “this little manual,” showing that he worked well in concentrated forms. This penchant for miniaturization ideally suited “O Come All Ye Faithful,” where a rapid sequence of images add to the song’s vivacity.

Originally titled “Ye Faithful, approach ye,” Oakeley’s text began “O come, all ye faithful/ Joyfully triumphant,” but this was soon transmuted into “Joyful and triumphant.” One chorus by Oakeley may baffle modern worshipers: “God of God, light of light,/ Lo, he abhors not the Virgin's womb.”

Oakeley adapted Wade’s “carried in the maiden’s womb” (gestant puellae viscera) with terms from the “Te Deum” prayer: “you did not abhor the virgin’s womb” (non horruisti Virginis uterum). The point was to refute Gnostics who believed that the divine could not intermingle with corrupt humanity.

In Scotland, Rev. Robert Menzies, an 18th-century missionary, reported that the song “rapidly became the fashion in [Edinburgh]; apprentice boys whistled it in every street; it was even said that the blackbirds in the square joined in the chorus!”

Nigerian musicologists have pointed to the peril of well-meant Anglican translations of the hymn into African languages that failed to take into account multiple meanings of words with different stresses. In the Igbo language spoken in southeastern Nigeria, the line “True God, begotten not made” was translated as “God's pig, which is never shared,” implying that pork delicacies offered to mission clergy were not divided with the congregation.

And in the Yoruba language of Western Nigeria, another line of the hymn was mistranslated as “Go out and dig for palm kernels, ye who are fond of passing water.” As a result, the Nigerian musicologist Lazarus Nnanyelu Ekwueme noted, the hymn “often provokes giggles from choirboys.”

Nigerian musicologists have pointed to the peril of well-meant Anglican translations of the hymn into African languages that failed to take into account multiple meanings of words with different stresses.

“Adestes Fideles” resoundingly entered modern literature with its inclusion in the Irish Catholic author James Joyce’s experimental novel Finnegans Wake. In multi-layered puns, Joyce referred to “Ahdostay, feedailyones,” suggesting a call to remain for those who are nourished daily.

The American composer Charles Ives used “Adeste Fideles” in his orchestral work “Decoration Day.” Ives had previously written an organ prelude and slow march in which “Adeste Fideles” appeared. In “Decoration Day” (the former name of Memorial Day), Ives made the hymn appear in a context of death and resurrection akin to that of James Joyce’s martyrs.

Sometimes “Adeste Fideles” has appeared out of context, as the screen composer Miklós Rózsa recalled. Preparing the 1959 Hollywood epic “Ben-Hur,” the director William Wyler suggested that a nativity scene with the star of Bethlehem in view would be an ideal occasion for including “Adeste Fideles” as a “Christmas song.” Rózsa pointed out that putting the hymn in a first-century tale would be anachronistic, but the director was unpersuaded, even after Rózsa ironically suggested also adding Irving Berlin’s “White Christmas.”

Much of the appeal of the song in contemporary culture is clearly due to its accessibility to amateur singers; those in the pews delight at Christmastime in this eminently singable hymn which appears to be aimed at them.

And as the Dictionary of North American Hymnology opines, the tune’s repetitions enforce a “sense of urgency” that entirely suits the context: “Imagine a child, tugging at your hand, saying insistently, ‘Let’s go, let’s go, let’s go!’”

Those in the pews delight at Christmastime in this eminently singable hymn which appears to be aimed at them.