Most prison shows present problems for Catholics. But ‘Time’ defies the stereotypes of the genre. 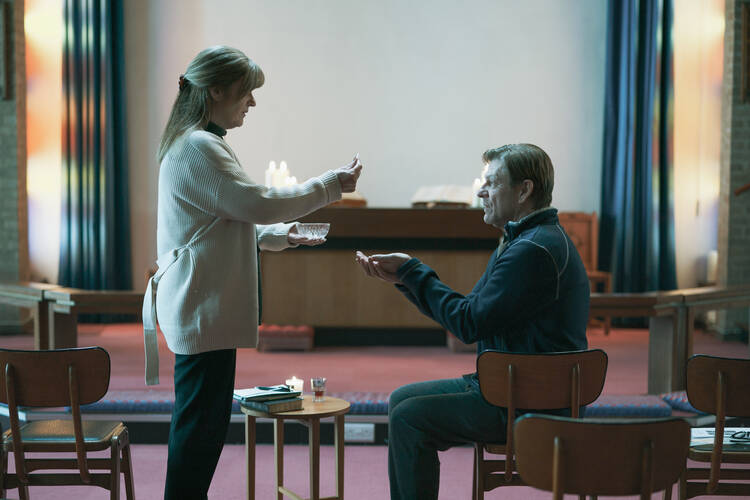 We need to talk about prison shows. I know, I know, “Orange Is the New Black” was groundbreaking. “Oz” was searing. “Prison Break” starred Wentworth Miller. I get it.

But many prison shows have a serious problem, especially for a Catholic: While the possibility of parole might float somewhere in the background, and family might come visit (almost inevitably as a source of strife), most prison shows are about surviving life in prison. More specifically, they involve the idea that the inmates’ old lives are over. And their new lives are so radically distinct from our own (in particular so lawless and violent), they seem to be taking place in a completely different reality.

Many prison shows have a serious problem, especially for a Catholic. But ‘Time’ defies the conventions of the genre.

(One notable exception is Sundance’s luminous “Rectify,” about a death row inmate freed from prison after nearly 20 years behind bars. By turns poignant, strange and spiritual, the series absolutely transcends the genre.)

If you’re wondering why all of this is a problem—if you sign on for a prison show, what else should it be about than prison life?—I would have had the same question, until I watched “Time,” BritBox’s new three-part series about a school teacher (played by Sean Bean) sent to prison after he kills a man while driving drunk. The show offers many of the genre’s familiar conventions—the crazy bully! the nasty drug-pushing gang leader! a quietly generous nun! But rather than being itself the subject matter of the series, prison is the stage upon and through which Bean’s Mark Cobden does the hard, slow work of accepting the consequences for his actions.

Most of the inmates we meet are wrestling with the terrible things they have done and the people they have hurt.

“Time” has two main storylines: Cobden contends with the challenges of being in prison, including endless harassment from one inmate; and prison guard Eric McNally (Stephen Graham) is forced to deal with a prison gang leader who has the capacity to have his son (an inmate in another prison) killed. In the case of Cobden, everything he sees and experiences—like watching a man brutally scalded by other inmates because they thought he was a snitch, or being threatened himself—he understands as part of the punishment he deserves. At one point his mother tries to remind him that his time in prison is his punishment, not the place in which he is going to be punished. But Cobden very much sees it as both.

It is not just Cobden who is contending with his past. Most of the inmates we meet are wrestling with the terrible things they have done and the people they have hurt. One man has been in prison his whole life for the inexplicable murder of his best friend when they were children. Another killed someone accidentally in a bar fight. A third robbed a store after racking up horrible gambling debts. Some of them are desperate for forgiveness or fighting to stay connected to their families; others carry the burden of what they have done on their own. But for each, those past choices and events remain permanently front and center. Prison is not a reality separate from their past, but the continuation of the choices they made and the place in which they struggle to face themselves and grow.

This may seem like a subtle point, and like most of the show’s greatest moments that idea is presented in such quietly understated ways that you might not even recognize its significance until later. (“Time” is the very rare show that I found has affected me more the longer I have been away from it.)

But beneath that small choice lies a radical, eminently Catholic conviction: that men and women in jail are not “convicts,” beings somehow not like us or worthy of the same care. They are other human beings on the same journey of sin, mercy and redemption.

Men and women in jail are not “convicts.” They are other human beings on the same journey of sin, mercy and redemption.

Other prison stories claim to offer a more realistic depiction of life behind bars. Their stories, we are told, are about overcoming the constant dehumanization of prison life. The inmates fight to maintain their humanity within impossible conditions. But it’s a shell game, usually; these stories sensationalize and legitimize the very violence and mistreatment they say they are condemning. Indeed on a show like “Oz,” the violence becomes the sales pitch.

In “Time,” series creator Jimmy McGovern shows care for prison guard McNally, too. Unlike most media representations of prison guards, McNally and his colleagues are not fascist thugs but altogether respectful of the inmates. It is fascinating, and honestly more than a little jarring, to watch them resist the stereotypes we find elsewhere. It’s another way that McGovern challenges our broader societal notions of prison and prisoners.

McNally’s story runs largely in counterpoint to Cobden’s: As Cobden struggles to accept and take his punishment, McNally is blackmailed into helping slip drugs into the prison. But intriguingly, they are both stories about redemption—Cobden’s his own, McNally’s that of his son. By way of the drug runs he agrees to conduct, McNally quite literally buys his son back from harm, at great personal cost.

Sister Marie-Louise, a chaplain at the prison, offers a liberating vision of what the church could be.

Some of the series’ most profound moments involve prison chaplain Marie-Louise (Siobhan Finneran), a Catholic nun who runs mentoring programs for at-risk youth and reconciliation circles between victims’ families and inmates. She is given no storyline of her own, but in a sense that lack only redoubles our sense of her generosity. She is here not for herself but to serve the prisoners.

While McGovern is no longer a practicing Catholic, his take on Marie-Louise offers a liberating vision of what the church could be. When Cobden is not allowed to attend his father’s funeral, Marie-Louise proposes the two of them conduct their own prayer service at the same time that the funeral is happening. What unfolds is a deeply moving sequence with a palpable sense of God’s presence. And it only works because Mary-Louise is not a priest. Lacking ordination, “all” she can do is offer a space in which God can do the work. But in fact that is exactly how we understand sacraments to work; God is the actor, not a cleric or anyone else. In a sense, having no priest actually allows the story to get to the heart of what we believe—a hopeful idea for our own future as a church (and one embodied in so many great nuns and lay ministers today).

In his long career, McGovern has created a number of series that explore and celebrate the complex humanity of their characters. His 2017 series “Broken,” which focused on the struggling parishioners of a northern England Catholic parish (run by Sean Bean’s Father Michael Kerrigan), feels almost like a companion piece to “Time.” There, too, the drama lies in digging into the lived reality of people who have done terrible things and are usually then written off as “the deadbeat mom,” “the bad cop” or “the embezzler.” (“Broken” and two of McGovern’s anthology series—“The Street” and “Moving On”—are also available on BritBox.)

To watch McGovern’s work in “Time” and elsewhere is to appreciate that our own time doesn’t end with any single choice or series of choices, even the very worst ones. Neither does anyone else’s, no matter what they have done. We may lose certain things as a consequence of the things we have done, but we never lose our humanity. And the road of redemption is one we walk together.

Correction, Sept. 17: ‘Time’ is a production of BritBox in the United States, not the BBC.