Pope Francis welcomes prisoners to Vatican before they tour museums 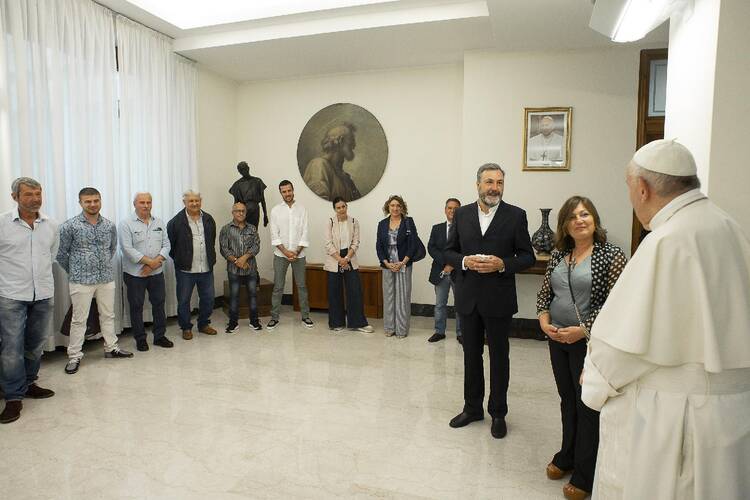 Pope Francis leads a meeting with inmates and staff from the Rebibbia prison in Rome, at his residence at the Vatican June 21, 2021. The pope met with around 22 inmates and staff of the prison. (CNS photo/Vatican Media)

VATICAN CITY (CNS) — Arriving at the Vatican early in morning, a dozen inmates from Rome’s Rebibbia prison brought a basket of breads they had baked before the sun came up.

They gave the basket to Pope Francis June 21 during a brief meeting in his residence before they set off — with the prison director, a few guards and two judges who oversee special release permits — to visit the Vatican Museums.

A Vatican video clip from the meeting showed Pope Francis speaking with the director, Anna Maria Trapazzo, then turning to the chaplain, Servite Father Moreno M. Versolato, and telling him, “Prisons with women directors function better.”

Like many people around the world, during the 2020 COVID-19 lockdown, the prisoners started baking bread. Trapazzo told Pope Francis that they will open a store soon and would be happy to welcome him there any time.

The chaplain said the prisoners have deep affection and great esteem for the pope because of his many prison visits and because of his calls for the dignified treatment of people who are incarcerated.

Offering some advice to the group, Pope Francis said, “It is important to seek out what is positive at a time when life is not at its most beautiful. Seek the positive in order to keep going forward.”

After leaving the pope, the group was welcomed on their tour by Barbara Jatta, director of the Vatican Museums, who told them the collection was for everyone, and she hoped they would be inspired by the beauty they found there.

Father Versolato told Vatican News it was particularly significant to have the two judges as part of the group since they are the ones who sign the permits allowing prisoners to leave for visits and events that are part of their program to reenter society.

The chaplain said the 12 prisoners and all others detainees he has met have deep affection and great esteem for the pope both because of his many prison visits, but also because of his constant calls for the dignified treatment of people who are incarcerated and a serious commitment to their rehabilitation.