Catholics owe Marty Baron a debt of gratitude. He told us the truth about the clerical sex abuse crisis. 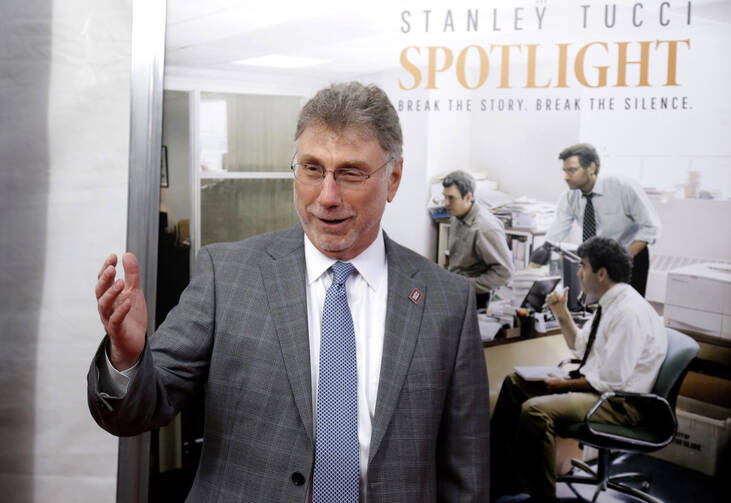 Marty Baron, former editor of The Boston Globe, walks the red carpet as he attends the Boston area premiere of the film "Spotlight" at the Coolidge Corner Theatre, in Brookline, Mass, Oct. 28, 2015. (AP Photo/Steven Senne, File)

Marty Baron, editor of The Boston Globe when the newspaper exposed the Catholic hierarchy’s systemic coverup of sexual abuse of children by clergy, retired from journalism at the end of February. Catholics owe him a debt of gratitude. He told us the truth.

Mr. Baron spent his final working years at The Washington Post after a half-century career in which he served at several of the nation’s premier newspapers, including the Miami Herald, the Los Angeles Times and The New York Times. But he will be best remembered for launching the Globe’s clergy sex abuse investigation, which won the 2003 Pulitzer Prize for Public Service, journalism’s highest honor. An outsider in parochial Boston not beholden to ties of kin and culture that hobbled others, he greenlighted an expensive and difficult investigation.

An outsider in parochial Boston not beholden to ties of kin and culture, Mr. Baron greenlighted an expensive and difficult investigation.

In a series of articles published beginning in the winter of 2002, The Boston Globe revealed the breadth of clergy sex abuse in the Boston archdiocese and the legal lengths to which church leaders went to cover it up. The investigation shook the church. The ensuing scandal led to the departure of tens of thousands of Catholics, parish closings, diocesan bankruptcies and a reordering of Catholics’ relationship with ecclesial authority.

But the impact of the Spotlight team’s series reaches far beyond Catholicism. It made possible revelations of sexual abuse in institutions as varied as the Boy Scouts of America, the Penn State football program and the U.S. Olympic Women’s Gymnastics team. All of these—as well as the #MeToo movement—flowed from the space for truth-telling about sexual abuse that Mr. Baron blew open.

The impact of the Globe’s reporting was epochal, fundamentally reordering American Catholics’ relationship with their church, said James McCartin, associate professor of theology at Fordham University and a historian of American Catholicism. The Spotlight series stands alongside Spanish conquest, 19th-century immigration and Vatican II as a pivotal event in the 400-year history of Catholics in North America, he said. The Boston Globe reporting was seminal, McCartin said, not only to the U.S. but globally. “I think this is the story of the church so far in the 21st Century,” he said.

In a series of articles published beginning in 2002, The Boston Globe revealed the breadth of clergy sex abuse in the Boston archdiocese and the legal lengths to which church leaders went to cover it up.

“I don’t think there is anything else like this, an example of this magnitude, changing the shape of a religion,” said Kathleen Holscher, associate professor and director of the religious studies program at the University of New Mexico, who has studied sexual abuse by clergy in the Navajo Nation. The painstaking and exhaustive journalism Mr. Baron initiated compelled Catholics to confront the corruption of the church hierarchy in a way that previous reporting had not, Ms. Holscher said. “I don’t want to throw too much weight just on Spotlight, but there is living in a world pre- and post-the sex abuse crisis,” she noted. “After 2002 one is living in a world that requires reckoning with a broken church.”

Coverage of clergy sex abuse was not new. Newspapers across the country, including Catholic publications (most notably the National Catholic Reporter), had been writing about individual cases for years. But the Spotlight series exposed the hierarchy’s pattern of obfuscation and secrecy that placed a higher premium on the reputation of the institution than the safety of children. Using the tedious, methodical and tenacious truth-seeking tools of investigative journalism, the Globe reporters pursued a story whose scope altered how the crimes were understood. Mr. Baron was willing to spend money on the salaries of a full-time investigative reporting team and willing to fight in court for the release of sealed settlement records and correspondence. Getting those documents and tracking down others unraveled a systematic conspiracy of cover-up and lies.

It is that dedication to the truth, even awful, world-shattering truth, that Catholics should be grateful for.

“For decades we were out there screaming and no one was listening,” said David Clohessy, national director of the Survivors Network of those Abused by Priests. “Baron and his team weren’t content to accept the same denial and minimization and blame shifting that bishops had given for years.” Mr. Clohessy credits the series with protecting tens of thousands of children by forcing a social reckoning with child sexual abuse. “It is always tempting to ignore and minimize evil and Baron's work made it impossible to do that,” Clohessy said. The journalism did something else too, Clohessy said. “It proved that no lies live forever.”

It is that dedication to the truth, even awful, world-shattering truth, that Catholics should be grateful for.

“It was a very powerful demonstration of what a free press can do,” said Tom Roberts, former editor of the National Catholic Reporter, who had been covering instances of clergy sex abuse for decades. “It is a magnificent journalism story.”

Mr. Baron’s work broke new ground, according to Sheila Coronel, director of the Toni Stabile Center for Investigative Journalism at Columbia Journalism School. “A lot of investigations have always been about government or big corporations,” Ms. Coronel said. “This is a milestone: investigating an influential, global, secretive institution. Spotlight looked at the Catholic Church and its knowledge. I think it takes someone from outside the family to say, something is wrong here.”

Watching ‘Spotlight’: what a priest who discerned his vocation during the Boston scandals learned
Sam Sawyer, S.J.

Mr. Baron is Jewish. The Catholic story is not his story. But his courage—his ability to refuse intimidation from lawyers, partisans or cardinals (or owners who question slow, expensive journalism)—has a sacramental quality to it. There is a quest and a revelation, clarity against fog, faith in the power of facts. In the wretched light of truth, we can see—and try to fix.

Tom Roberts compares this kind of journalism to the Ignatian examen, in which one welcomes desolation as a kind of message. “We know that any human individual or institution is going to go through times of great difficulty,” he said. “We don’t get the benefit of those kinds of troubles and difficult times unless we meet them and deal with them and in our case take advantage of the spirituality that grounds us to help us out of these things.”

Mr. Baron led the team that forced us to see. Twenty years later, we are still grappling.

Sheila Coronel offered an assessment of the retired journalist that sounded like a prayer: “He’s an example of journalistic greatness. May there be more like him.

Eileen Markey teaches journalism at Lehman College and is the editor of an anthology of the work of investigative reporter Wayne Barrett, Without Compromise: The Brave Journalism That First Exposed Donald Trump, Rudy Giuliani and the American Epidemic of Corruption. (Bold Type Books/Hachette)