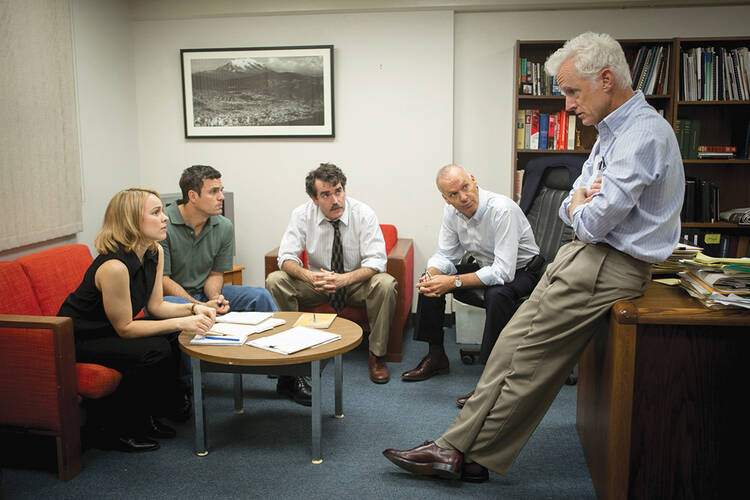 In a revealing moment in Spotlight, the expertly crafted new film about the Boston Globe’s investigation into the clerical sexual abuse scandal, the lawyer Mitchell Garabedian (Stanley Tucci) offers a damning analysis of the unfolding crisis. “Mark my words, Mr. Rezendes,” he tells Globe reporter Mike Rezendes (Mark Ruffalo). “If it takes a village to raise a child, it takes a village to abuse one.”

Much will be written about “Spotlight” in the months to come. It is already being talked about as a formidable contender for Best Picture of the year. It is also sure to start new debates about what policies led to the widespread abuse of children by priests in Boston and around the world. Some people may feel Tom McCarthy, the writer and director, does not capture every nuance of this tragic and complicated story. But these questions should not distract from his great achievement: “Spotlight” is, at once, a detective story, a love letter to journalism and a sensitive exploration of the ravages of sexual abuse upon an entire community. Catholics who have lived with this scandal for decades will again be scalded by its horrors. And this Catholic, at least, emerged from the film wondering why it took so long to do something about it.

The village at the heart of “Spotlight” is, of course, Boston, the big city that still feels like a small town, ruled for decades by Irish Catholics. McCarthy immerses the viewer in the heart of Catholic Boston, from the palatial residence of Cardinal Bernard Law to the Catholic Charities dinners that sustain the church’s many charitable works. The Globe lives in the shadow of this world, with many editors and writers who still call themselves Catholic in one way or another.

Walter “Robby” Robinson (Michael Keaton) is a graduate of Boston College High School who has made good at the Globe, rising to lead the paper’s famed Spotlight investigative team. His reporters are poking around a story about police misconduct when a new editor-in-chief rides into town looking for a way to make the paper relevant at the dawn of the digital age. Robinson and editor Ben Bradlee Jr. (John Slattery, a long way from the sartorial splendor of “Mad Men”) are suspicious of Marty Baron, an outsider with big ideas who has little to say. The fact he is Jewish and not from Boston is pointed out by more than one of the paper’s critics. When Baron (Liev Schreiber) suggests taking legal action against the church, in an effort to unseal classified documents related to the case of John Geoghan, the publisher wonders whether it is a good idea to upset the paper’s Catholic readership.

The Globe’s leadership may be reluctant to alienate a powerful constituency, but they follow Baron’s lead, and thanks to some dogged reporting, they slowly begin to find their story. One of the pleasures of “Spotlight” is watching the Globe’s editorial team employ their skills to coax reluctant sources and navigate the byzantine rituals of searching public records. No computer assisted reporting for these journos. They have to rely on the Globe’s “morgue” of archived clips and the state’s hard-to-access legal records. Their great find is an archive of Catholic directories they use to compile a list of priests who were reassigned under questionable circumstances. Never has a Catholic directory been lavished with such cinematic attentions.

One of the arguments of “Spotlight” is that investigative journalism matters, and that it takes time and resources to be done well. McCarthy, who played a reporter on the final season of “The Wire,” may indulge in some newsroom nostalgia at times, but it is hard to disagree with this larger point. Solid investigative journalism can still be found in national newspapers, but many cities across the country do not have a strong independent press to serve as a check on local corruption. The year 2001 may not be that long ago, but in “Spotlight” it seems very far away.

Ruffalo, playing Rezendes, captures a classic journalistic type: a disorganized yet feisty reporter who kicks into high gear when facing a deadline or catching the scent of a good story. Ruffalo’s performance may be the best of a superb cast, which also includes Rachel McAdams, Brian d’Arcy James and Billy Crudup. McCarthy is unusually sensitive to the challenges faced by Catholic reporters reporting on a great Catholic scandal. Sacha Pfeiffer (McAdams) attends church with her grandmother, but stops going after she starts interviewing sexual abuse victims. In one of the film’s most poignant moments, Rezendes admits that he loved going to church while he was young and hoped some day to go back. But then he read letters from family members to church leaders detailing the abuse of their children, all of which fell on deaf ears.

Making the stories of victims new again is perhaps the film’s greatest accomplishment. In years after the Globe’s report, representatives from Survivors Network of Those Abused by Priests and other victim groups became go-to media sources, and sometimes the unique tragedy of their experiences was lost in the media din. McCarthy wisely chooses to highlight just a few victims, and allows them to tell their stories plainly, but in painful detail. A young boy is abused by the first person, a priest, who tells him it is OK to be gay. A boy who recently lost his father is preyed upon by a priest precisely because he is emotionally vulnerable. The sadness of these scenes is fathomless.

For a film that profiles an investigation into the church, it is surprising how few clerics make an appearance in “Spotlight.” There is a portrayal of Cardinal Law, of course, and a quick shot of Geoghan, but that’s about it. McCarthy is more interested in examining the lives of the other Catholics in Boston and how the scandal affected them. One important relationship centers on Robby Robinson and Jim Sullivan, a lawyer and old friend from Boston College High School, who, Robinson gradually learns, helped the archdiocese settle several sexual abuse cases. McCarthy, a Boston College grad, takes a keen interest in how these Catholic schoolboys come to terms with the abuse that went on in their city.

In choosing to focus on this relationship, McCarthy suggests both that the church is larger than the clerics who lead it and that the weight of the sexual abuse scandal rested heavily on all of the Catholics of Boston. “We all knew something was going on. Where were you?” Sullivan asks Robinson when he is finally confronted with the full list of accused priests. “I don’t know, Jim,” he replies ruefully. In a later scene, Robinson and his team struggle with guilt for failing to report the story years earlier, when victims first started coming forward.

“Spotlight” does not offer any easy answers to what caused the sexual abuse scandal, though it does suggest some theories. Rezendes keeps up a running correspondence with A.W. Richard Sipe, the former priest and psychologist who recognizes priestly abuse as a “recognizable psychiatric phenomenon.” He proposes that a secretive culture within the priesthood, where some men were sexually immature, allowed the abuse to occur. But ultimately the film resists placing blame on any one person or policy. Marty Baron is eager to indict “the system” at the heart of the scandal, and McCarthy leaves viewers with multiple screens full of names of dioceses that experienced major problems with abuse. But the question of why these scandals happened and how they should be avoided is left largely open. This viewer was left with the nagging thought that the abuse scandal is something that all Catholics have to reckon with in some fashion. In its own way, “Spotlight” calls on all Catholics to take responsibility for the church, because when it falters, we all pay a price.

Maurice Timothy Reidy is an executive editor of America.