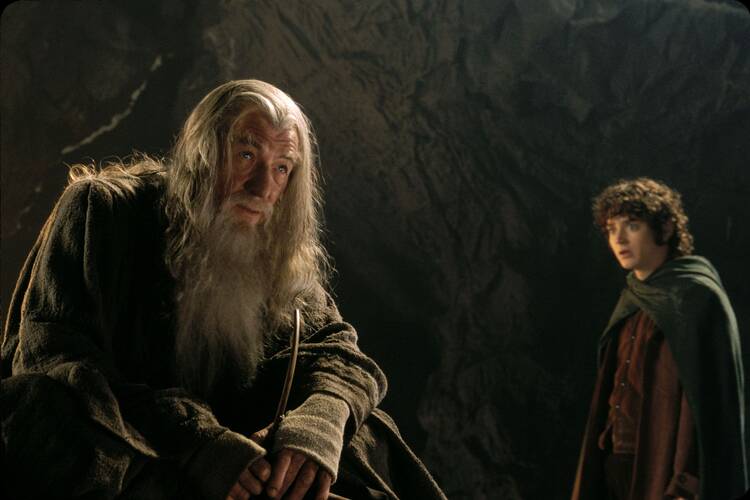 Elijah Wood and Ian McKellen in “The Lord of the Rings: The Fellowship of the Ring” (photo: IMDB)

“The Road goes ever on and on,” Bilbo Baggins sings early in J.R.R. Tolkien’s The Fellowship of the Ring as he leaves Bag End for the last time. In the movie adaptation directed by Peter Jackson, which turns 20 this year, the late, great, Ian Holm’s Bilbo sings this softly to himself, a wistful accompaniment on his solo journey back into the wild, away from his dreaded and beloved Ring of Power and toward the last house of the elves at Rivendell.

I was 9 years old when Jackson’s “Fellowship” hit theaters. One of the longest-lingering joys of that film, and indeed the whole trilogy, is a surprising one: the thrill of embarking on a journey. Jackson shows us the lush landscapes of Middle-earth and then takes the plunge into them, bringing the viewer along for the ride. The transportational nature of the film remains powerful 20 years hence. Especially so when the lushest thing in my general vicinity is a tired, overwatered houseplant and maybe that cheese at the back of the fridge.

For quarantine is not a fantastic journey, Covid-19 not a Nazgûl to outrun. It is stasis. Revisiting this classic story in this time of isolation offers a new perspective on quarantine, and indeed a new perspective on journeys themselves. In the Catholic imagination, isn’t our ultimate journey, the gradual return to God, a static one, a closed loop? It is a return to God who holds us even now.

During the pandemic, when it seems that all I do is rest, I was afraid that watching “The Fellowship of the Ring” would feel a little like a chore. It is well-trodden ground for me, a source of nostalgia rather than inspiration. I figured that revisiting it would make me only feel loss; the wonder and joy I felt watching it as a child couldn’t remain. I am older now. I know too much (including charges of racism in Tolkien’s work). I have seen that life infrequently holds the wonder found around every corner in Jackson’s film.

When my wife and I decided to watch this past Christmas, we had endured weeks of stress—the prospect of celebrating the holiday with family was a fraught and painful circular argument. We ended up alone for much of the holiday, and the nostalgia trip that I had expected to accompany rewatching “The Fellowship” faded in the face of another feeling. I felt invested in a new way, which had very little to do with the yearning for adventure I felt as a boy. Instead, I noticed the small interpersonal details: bare hobbit toes in the black earth under the rows of corn that Merry (Dominic Monaghan) and Pippin (Billy Boyd) rush through, arms filled with produce stolen from Farmer Maggot; Sam (Sean Astin)’s awe at being farther from home than ever before; Frodo’s brave decision to embark on a journey to Mordor to destroy the Ring and save all of Middle-earth.

As a kid I saw myself in Aragorn (Viggo Mortensen), or at least I hoped to: the noble, self-sacrificing warrior and king in hiding. Watching the films this time, I saw myself in the hobbits—whose pleasures and worries are not in the great sweep of global affairs and the burdens of leadership but instead in local concerns: making sure their green home stays safe, companionship, a good meal and a beer (it comes in pints!) with friends. They exemplify what we have lost in this pandemic. Home does not feel like home anymore when it is also office and school and bar and gym and restaurant—all things to us, at all times. I found myself pining, along with the hobbits, for a return to home as refuge. Tolkien saw himself in them, but this was the first time I did. This time around it wasn’t an imagined journey into the wilds of Middle-earth that provided the escapism. This time, it was the warm glow of the dream of all the hobbits: to return home.

Entering into another Holy Week, still under the shroud of the pandemic, this yearning for home takes on a spiritual valence as well. Lent is often described as a journey, the destination being the celebration of the resurrection at Easter. Lent takes its length from the 40 days Christ spent in the desert at the beginning of his ministry. That first journey, while very different in location from most of ours, is similar in one crucial respect: It is a journey in place.

Look at the Gospel of Matthew, one of the three Synoptic accounts of the temptation of Jesus: Jesus is brought to the desert by the Spirit and remains in solitude, not eating, for 40 days. He perseveres against the devil, maintaining the sovereignty of God the Father by not ceding to the devil’s temptations. Then, after the devil leaves him, he is ministered to by angels. To me, this feels like a Triune moment, the Father, Son and Spirit together in Christ’s unique person. If there is a homecoming, it is Jesus coming home to his Trinitarian self.

Like Frodo, we become more and more attuned to the idea of a true home, one necessarily beyond this world, where all things will once again be well.

The Cappadocian father Gregory of Nyssa writes about spiritual journey in his Life of Moses, where he interprets the biblical ascent of Moses up Mount Sinai (where he remained for 40 days) as instructions for contemplation, or a true journey to God. Crucially, this journey is also internal. A spiritual ascent happens when the ties to material reality are muted or even severed. It is a purifying of the senses and, paradoxically, a journey deeper into the self, until the expected becomes unexpected, until light becomes darkness.

In the Mirror of Galadriel, which shows visions of the past, present and potential futures, Frodo sees a vision of the Shire burning. Galadriel tells him that this is what will happen if he fails. Jackson shows us the mirror clouding black, and suddenly Frodo’s idyllic home is consumed in flames, while tall orcs stalk the wreckage. The eye of Sauron fills the mirror, and Frodo falls back, terrified.

As another Lent closes and another Easter begins, we tread the liturgical year as pilgrims, like hobbits.

“This task was appointed to you,” Galadriel says, “and if you do not find a way, no one will.” Watching the scene now, I think about the pandemic around us like the encroaching of night. Instead of feeling the urgency of his task to destroy the Ring, like I did as a child, I feel Frodo’s loss. His home will never be the same again, never a refuge.

In the films, the burning of the Shire never actually comes to pass; the Ring is destroyed and all is made well. In Tolkien’s story, Frodo is stained by the burden of the evil thing he carries, such that no earthly home is comfort to him, even after the evil is vanquished. In our lives, the turmoil of the world can stain dreams, even turn our homes into prison. Like Frodo, we become more and more attuned to the idea of a true home, one necessarily beyond this world, where all things will once again be well. To get there, we will have to delve deep into ourselves, to move away from the world even as we move through it.

However, I keep coming back to the dream of home being burned in Galadriel’s mirror. Something has departed from us during this pandemic that won’t come back. For some, it is everything—parents, grandparents, friends, children. The loss is unfathomable. For those, like myself, who have escaped the death of loved ones through privilege, affluence or just plain luck, the loss is harder to place. But one thing is clear. One way or another, we are not really going back home.

What ‘The Lord of the Rings’ can teach us about U.S. politics, Christianity and power
Jessica Hooten Wilson

Who was the priest who helped raise J. R. R. Tolkien?
Sean Salai

The end of Lent is a resurrection, an event that makes all things new. At the end of Covid, nothing is new, except loss, trauma, unexpected death. How am I to look at this Easter on the horizon? How foolish it feels to think that anything can be made new.

Yet, even as we languish in the desert, the flames are still curling around the heads of the apostles in that upper room, the Spirit’s tender advance. What journeys they undertook, what marks they bear.

As another Lent closes and another Easter begins, we tread the liturgical year as pilgrims, like hobbits. For the journey is not to be found in the stain and sorrow of this passing world, but around and around the topography of ourselves, where we shall surely meet the one who is both where we are and where we are going. 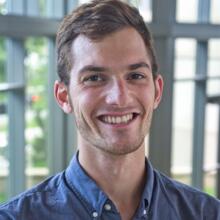 Jack Nuelle is a writer based in Chicago. His work has appeared in the National Catholic Reporter, Image Journal and other outlets.