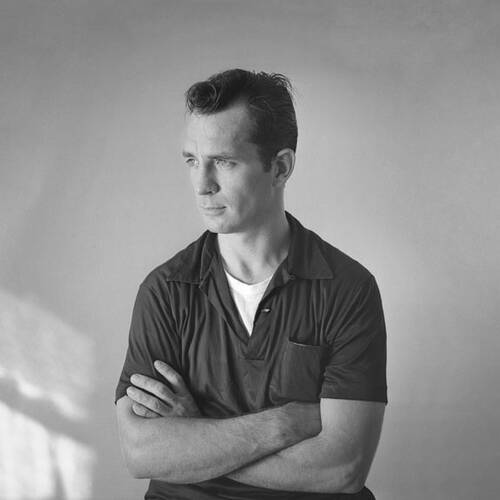 The thread of Jack Kerouac’s literary and personal life in the American imagination might be unwound succinctly in the following terms: ambitious and fun-loving young man leaves behind his small-town upbringing to chase heroes and dreams in the American West, finding along the way new paths to enlightenment while blazing a trail for generations of seekers to follow.

It is a theme familiar to most of us, because more than a few of our favorite novels embrace it. It is also, in the case of Kerouac, almost entirely a fiction. The man most associated with the peripatetic Beat Generation spent more than half his life in his hometown of Lowell, Mass., living with his mother. This master of the postwar American idiom grew up speaking the French dialect of his Canadian immigrant parents and actually attempted an early draft of On The Road (the book was eventually published in 1957) in the dialect of his Franco-American community. Despite the image of a modern spiritual seeker who eventually found a home in Buddhism, Kerouac was born and died a self-identified Catholic; and despite his iconic status as a chronicler of the road, the most prominent theme in Kerouac’s novels is a mysticism of place.

Because his fiction (13 autobiographical novels) closely follows the events and themes of Keroauc’s own life, a visit to Lowell is not just a pilgrimage to see a grave or a museum; it is instead a step back, to the degree possible, into the world Kerouac inhabited, chronicled and occasionally loathed during a productive literary life cut short by alcoholism at the age of 47. During a three-day visit in November 2012, I had the chance to walk the streets Kerouac walked and visit the important sites of his life in Lowell: the apartment in which he was born, an event he claimed to remember as occurring “at five o’clock in the afternoon of a red-all-over suppertime”; the Catholic school where he began his education, where the inscription over the door reads not “school” but école; the public library where he spent much of his teenage (and later) years; the churches and religious shrines of a Franco-American culture that had its own devotions, its own stubborn Jansenist streak, its own interpretations of the American Dream.

From Lowell and Back Again

At one point before the Civil War, the textile mills powered by Lowell’s numerous canals off the Merrimack River made the city one of the Western world’s greatest industrial centers. Workers flocked to Lowell, including a large population of French-speaking immigrants from Canada. Today, the city has the second-largest population of Cambodian-Americans in the United States, so that the city is one-fifth Buddhist (somewhat ironically, given the way Kerouac helped to popularize the study of Buddhism) and is also home to large populations of Latin American immigrants. The mother church of the Franco-American Catholic community for generations, St. Jean Baptiste, enjoyed a brief second life as Nuestra Señora del Carmen before being finally closed in recent years. Economic hard times came even before the Great Depression and lasted for decades, with upticks during World War II and during the 1980s, when Wang Laboratories employed thousands of local employees. Today, Lowell has the feel of a city diminished, but not without a thriving arts scene and some economic prospects. It is, in short, not just the place where “Ti Jean” was born.

The Mysticism of Home

Kerouac’s “Lowell novels,” including The Town and the City, Visions of Gerard, Maggie Cassidy, Vanity of Duluoz and Doctor Sax, show the interplay of a mystical faith and quotidian existence in a working-class town, including intensely personal reflections on death, destiny and the self-discoveries of a young man attempting to find himself along the axes of spirituality, sexuality and cultural identity. This is far removed from the legends of chasing Neal Cassady across the Plains. Kerouac not only writes in detail of his own numerous mystical visions, but attributes even more to his brother Gerard, whose early and painful death haunted Keroauc even as the local nuns revered Gerard as a child saint.

The physical environment of his early apartments, churches and schoolyards also gives one a sense of the bifurcations to come in Kerouac’s later life. He was raised in a Franco-American culture that valorized resistance against American Protestant values, and yet he became a somewhat bewildered American icon. He approached the sacraments with nothing short of terror, and yet drifted in and out of Buddhism in his 30s, perhaps (as some biographers have claimed) in a desperate attempt to save himself from the alcoholism that had overtaken his life, as it had his father’s. He dreamed of an aristocratic pedigree for his family, going so far as to create fanciful genealogies of his ancestry, and yet moved from year to year in his youth depending on his father’s economic fortunes. In later life he would return to Lowell again and again, occasionally with his mother, drawn always back to the blue-collar homes and bars of his youth. And he was drawn even more back into the mystical faith his mother and his culture had given him—even On The Road, Kerouac insisted, was “really a story about two Catholic buddies roaming the country in search of God.” A self-description in Lonesome Traveler repeats the claim that he was “not a ‘beat’ at all, but a strange solitary Catholic mystic” who “always considered writing my duty on earth, and the preachment of universal kindness, which hysterical critics have failed to notice.”

Kerouac’s mystical visions had another specific theme—the crucifixion. In Maggie Cassidy, Christ speaks to him from a crucifix after confession:

“My child, you find yourself in the world of mystery and pain not understandable—I know, angel—it is for your good, we shall save you, because we find your soul as important as the soul of the others in the world—but you must suffer for that, in effect my child, you must die, you must die in pain, with cries, frights, despairs—the ambiguities! the terrors!”

Gerard had similar visions. While both brothers were convinced of universal salvation (a sticking point for those who would call Kerouac a Jansenist), glowing crucifixes and visions of Christ suffering loomed large. In Big Sur, Kerouac’s haunting chronicle of an attempt to escape his demons by isolating himself on the California shoreline, he suffers a terrifying nightmare about Satan coming to capture him in the form of a growing stain across the sky. He is surprised to hear angels laughing with joy, and “suddenly as clear as anything I ever saw in my life I see the Cross.” Biographers note that in his dissolute final years, Kerouac spent much of his time sketching scenes of the crucifixion. One senses that Kerouac felt not only gratitude for the sacrifice of the crucifixion, but also a certain kinship with a suffering Jesus—a vanity, perhaps, but not an unknown one in the history of Christian mysticism.

Another local site that appears in the Lowell novels is a huge replica of the grotto at Lourdes, where generations of Franco-Americans offered prayers and climbed on their knees up steps behind the grotto to a looming crucifix atop the hill. The sky was slate-gray the day I walked up those steps myself (no knees, thanks), and the dark image of Christ hanging from the wood against that backdrop was indeed something to inspire a kind of terrible awe—at the enormity of the sacrifice, of the messy bloodiness of incarnated divinity, of the mysteries of life and death, salvation and suffering.

I imagine Kerouac as a child at that shrine, which he visited scores of times, and suspect it was that memory, not one of hipsters seeking kicks in some far-off locale, that explains Jack Keroauc’s life, death and work more than anything else.

James T. Keane is an editor at Orbis Books in Ossining, N.Y., and a former associate editor of America. This essay owes much to the assistance of Paul Marion, executive director for community and cultural affairs at UMass-Lowell.