From slavery to civil rights, ‘The Black Church’ on PBS tells an essential American story 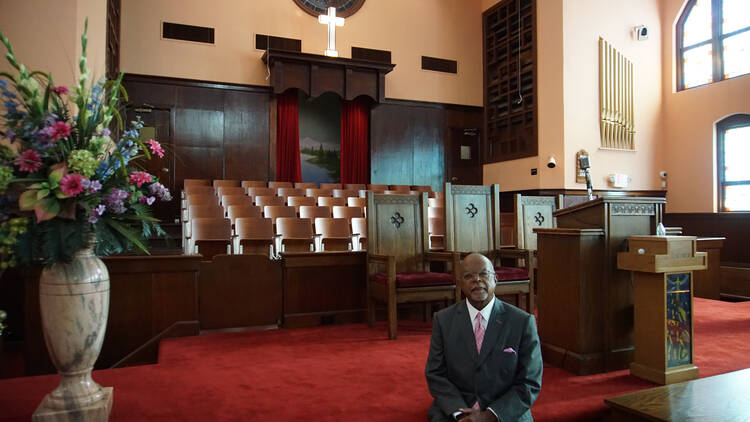 There are so many reasons to watch “The Black Church: This is Our Story, This is Our Song.” This two-part documentary, airing on PBS on Feb. 16 and 17, is captivating and inspiring, weaving together history, religion, politics and music to give viewers deep insights into Black religious and cultural expression in America. The subtitle, an adaptation of the refrain of the hymn “Blessed Assurance” (“This is my story, this is my song, Praising my Savior all the day long”), reveals the perspective that unfolds in the series: that the Black church and the music born out of it have been instrumental in Black identity and empowerment for centuries.

In “The Black Church,” Dr. Henry Louis Gates Jr. explores some of the origins, motivations and divisions that permeate the Black church with a mix of mini-lectures, interviews, performances and site visits. Dr. Gates engages scholars, preachers, musicians and thought leaders to offer an informative and thought-provoking journey through American history using the Black church as an entry point and a lens for critical examination. (A book based on the series is also now available.)

Dr. Henry Louis Gates Jr. offers a thought-provoking journey through American history using the Black church as an entry point and a lens for critical examination.

Part 1 focuses on the development of the Black church and its central role in advocating for freedom from slavery and for Black advancement during the 18th and 19th centuries. The documentary highlights moral questions and conflicts between Christianity and slavery; white Christian slave owners justified slavery on religious grounds, though some questioned whether Christians should enslave anyone, especially other Christians.

Particularly notable is the discussion of how biblical stories were emphasized, adapted or minimized by different groups to serve different purposes. For slaves, the story of God’s liberation of the Israelites from slavery in the Exodus was a foundational narrative for liberation theologies. For slave owners, the Exodus story was deemphasized or even removed from Bibles, an obvious recognition of the power of the narrative. Instead, slave owners emphasized texts on obedience and piety to serve corrupt purposes. Slaves also found inspiration and motivation in Israel’s journey to the promised land and redemption through Jesus’ unjustified persecution and suffering on the cross, drawing on these motifs to pursue justice in the face of oppression.

For slaves, the story of God’s liberation of the Israelites from slavery in the Exodus was a foundational narrative for liberation theologies.

One topic that is briefly considered is the influence of African religious traditions on the Black church. The topic is mentioned early in the documentary when discussing religions that African slaves brought with them to America, but a more detailed exploration of this influence could have enriched the conversation.

As Black churches developed, they began to serve the diverse needs of their communities, not only acting as beacons of hope but also practical locations for socializing, sharing resources and providing education. The documentary mentions the connections between Black churches and the founding of Historically Black Colleges and Universities (HBCUs), such as Spelman College, Morehouse College and Fisk University, though more engagement on these connections would have been appreciated.

The documentary does not shy away from addressing various tensions in the Black church.

The documentary does not shy away from addressing various tensions in the Black church. There are debates about worship style and preaching, with divisions emerging over whether spontaneous, charismatic expressions or more formalized methods of worship should be affirmed and practiced. The necessity of education for preaching and the role of women in the church were also sources of tension. Multiple contributors acknowledge sexism in the Black church, noting the unfortunate parallels between Black struggles for freedom and equality and  attempts at women’s suppression and exclusion from religious and political leadership. Divisions over L.G.B.T.Q. Christians in the church are also considered, with conversations about how some churches affirm, condemn or ignore homosexuality. Of these tensions, the treatment on women is the most robust and instructive, highlighting many women whose names should be known and whose work inspires present and future leaders.

Differences in worship style, leadership and L.G.B.T.Q. acceptance developed in complex ways across denominational and regional lines, phenomena which are examined in the documentary. A more in-depth treatment on why social conservatism persists in some areas of the Black church could have enriched the discussion of these tensions in the church.

An undercurrent of the entire documentary is the important role of music in the Black church.

An undercurrent of the entire documentary is the important role of music in the Black church. Variations in the musical styles of spirituals, hymns and Gospel music are explored and performed. The role of music in helping to fund the civil rights movement is also highlighted. The documentary notes the struggles over the commercial success of Gospel music, with some embracing diverse audiences and musical styles while others reacted more cautiously or expressed concern about diluted messages. The robust treatment on music is entertaining and enlightening.

The role of the Black church in working for racial justice and equality is profound and pronounced. Many of the leaders of the civil rights movement made their home in the Black church. The influence of the church on Dr. Martin Luther King Jr. is highlighted, but many other leaders are praised for their contributions and work in the movement. The documentary offers a rich analysis of key players and themes that were prominent in the movement, and it also addresses how and why other movements for Black empowerment emerged outside of the church.

The sacramental pull of ‘Lift Every Voice and Sing,’ the ‘Black National Anthem’
Eric T. Styles

Martin Luther King Jr. shows us how Jesuit spirituality can be lived—in and outside the church (edited)
Marcia Chatelain

The documentary follows the relationship between the church and continued calls for racial justice up to the present day. The end of Part 2 considers reasons the Black church’s influence has waned for some in recent decades, highlighting lack of acceptance, shifting trends away from church and new approaches to bringing about social change. Yet the documentary affirms that for many, the church remains central in their lives and in the struggle for justice and equality. One of the most compelling aspects of the documentary is its treatment of acts of violence against Black churches based on beliefs in white supremacy, noting the tragic and stark parallels between past and present realities.

Considering the state of affairs in the United States, “The Black Church: This is Our Story, This is Our Song” is a must-see documentary. It helps to answer many questions about how we have arrived at this moment as a society. Offering depth and breadth, it takes viewers on an emotional and enlightening journey, offering much to reflect on and potentially inspiring religious and civic engagement. While the documentary does not fully engage theological differences between Christian denominations, it clearly expresses that what unites different churches as part of the “Black church” is the foundational interest in overcoming centuries of oppression in order to promote Black advancement and empowerment, using Christian faith as a vehicle to inspire change.