The sacramental pull of ‘Lift Every Voice and Sing,’ the ‘Black National Anthem’ 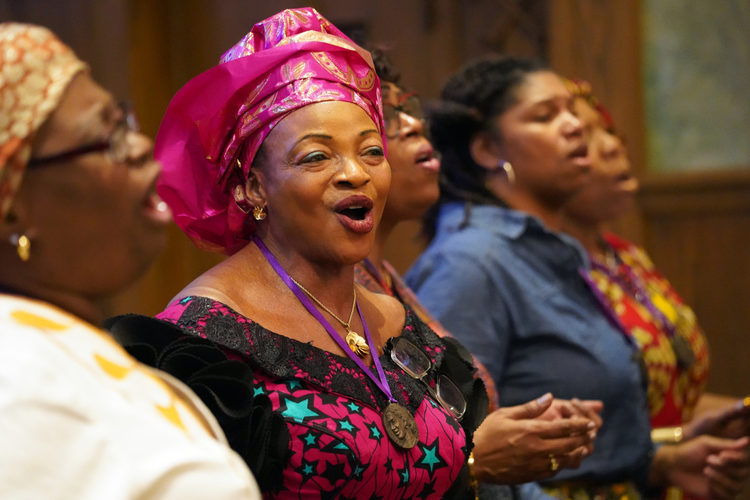 As a child I stood, hand on heart, pledging allegiance to the flag and singing about “bombs bursting in air.” I can never remember which lines come first in our national anthem: “gallantly streaming” or “twilight’s last gleaming”? While these patriotic customs may be more contentious these days I find them valuable, especially now as an adult. I worry about losing the rituals of belonging and becoming that shape our vastly varying identities and draw us together.

In the final days of Donald J. Trump’s presidency, House Majority Whip James E. Clyburn proposed that “Lift Every Voice and Sing,” popularly accepted as the national anthem of Black people in the United States, be adopted as a new “national hymn”—a symbolic bid to foster healing in a divided nation. The prospect of a new life for this hymn heard in churches and assemblies across the country at once causes me discomfort and piques my interest. What can this song mean for a nation in peril?

I cannot recall a time when I did not sing or at least hear “Lift Every Voice and Sing” or even when I first learned to sing this hallowed hymn. I may have sung it at every assembly at Hearst Elementary, the all-Black school I attended from ages 3 to 6. It has always been there: in the ether of every Black church attended in Chicago; in “the Hills” of north-central Mississippi; and in “the Delta,” where the blues and my daddy were born. It is the song sung in the places where our “fathers and mothers had sighed.” The words and melody are eminently familiar to me. Not unlike the experience of singing “The Star-Spangled Banner” or reciting the Nicene Creed, it is only possible to pull off the performance in the presence of a congregation that reminds you of the next line.

“Lift Every Voice and Sing” has always been there: in the ether of every Black church attended in Chicago; in “the Hills” of north-central Mississippi; and in “the Delta,” where the blues and my daddy were born.

It must have been during my college years that I began to understand the significance of the song—its place in American communal life. Two important themes emerged in my consciousness at the time: the way the particular history, experience and culture of Black Americans offered a piercing critique of our nation’s collective self-image, demanding that America be what it says it is; and the fundamental need for enduring, socially shared meaning to be expressed and passed on through art, ritual and performance.

Imani Perry’s biography of the song, May We Forever Stand: A History of the Black National Anthem,offers an insightful look at the Black community’s changing relationship with the hymn, revealing what was important to any given generation.

“Lift Every Voice and Sing” was written in 1900 by two brothers from Jacksonville, Fla.: novelist, poet, songwriter and lawyer-activist James Weldon Johnson, and composer and musician John Rosamond Johnson. James had planned to write a poem to commemorate Abraham Lincoln’s birthday on Feb. 12, 1900, but nothing came to fruition. Instead, he capitalized on the nascent ideas for the poem and fashioned them into lyrics as his brother wrote the score. The song was first performed in 1900 for Booker T. Washington, “the preeminent (albeit controversial) black leader at the turn of the century,” Ms. Perry writes. It was dedicated to Washington and sung by the students of Stanton School where James was the principal.

Ms. Perry notes that “the song proved to be, both then and soon after, much bigger than an ode to any one leader or icon. It was a lament and encomium to the story and struggle of black people. The Johnsons at once wrote black history and wrote black people into the traditions of Western music with their noble song.”

'The song proved to be, both then and soon after, much bigger than an ode to any one leader or icon. It was a lament and encomium to the story and struggle of black people.'

Within 20 years, the song had become known as the “Negro National Anthem” and was adopted by the N.A.A.C.P. In 1928, Rabbi Stephen Wise, a white supporter of the N.A.A.C.P., wrote:

The “National Anthem’’ by Rosamond and James Weldon Johnson, text and music alike, is the noblest anthem I have ever heard. It is a great upwelling of prayer from the soul of a race long-wronged but with faith unbroken. I wish that “Lift Ev’ry Voice and Sing” might be substituted for some of the purely martial and unspiritual so-called national anthems [that] are sung by the peoples.

Ms. Perry’s work illustrates how “Lift Every Voice and Sing” became a linchpin in what she calls “black formalism,” a set of social practices organically and intentionally developed to support the building and buttressing of Black humanity in a society that was extraordinarily hostile. “It is, in its symbolic meaning,” Ms. Perry writes, “an articulation and expression of grace and identity that existed in refuge from the violence of white supremacy,”

Joe Biden knows the grief of losing family—and how our pain can have a purpose.
Matt Malone, S.J.

The hymn became a focal motif for this quest. The song demanded and demands that you stand and sing, telling the particular and harrowing story of Black people in the United States without ever mentioning Africa or the enslavement of peoples.

“Lift Every Voice and Sing” is not as well known as it once was. Still, I am always taken aback at its effective and affective punch when I choose to deploy it as a liturgist. It is not a short song, but all three verses must be sung. And the people always stand, without prompting.

The song demanded and demands that you stand and sing, telling the particular and harrowing story of Black people in the United States without ever mentioning Africa or the enslavement of peoples.

Pope Francis’ recent encyclical, “Fratelli Tutti,” offers a way to think about what it means to become “a people.” It is not a science, but it is also not mystical. “Rather, it is a mythical category,” the pope writes. “To be part of a people is to be part of a shared identity arising from social and cultural bonds. And that is not something automatic, but rather a slow, difficult process...of advancing toward a common project” (No. 158.)

In my college years, I began to appreciate what it meant to belong to a people. No longer could anyone tell me that to be Black in the United States was to be someone without a history of her or his own. My parents told me otherwise—with every trip made down South; with every story told; with every reverence paid to an elder. This extraordinary and exquisite song also tells me otherwise. That is when I began to see how sacramental life really was. Singing “Lift Every Voice and Sing” pushes toward a sacramental act; it does what it says, calling to mind a history, drawing together disparate voices, making us “a people.”

So when I contemplate the possibility of naming this deeply meaningful piece of cultural production an official “national hymn” for all Americans, I still have a few questions.

Would it lose that thickness, that capacity to call to mind and heart the history and sojourn of Black life in America in such a robust “people making” way?

Would white Americans, especially those who consciously or unconsciously feel themselves under siege as they perceive their majority status changing, even receive the song? As Americans of various ethnic backgrounds demand a place at the table of our common life and governance, will some only see this as just one more attempt to take what rightly belongs to them?

Singing “Lift Every Voice and Sing” pushes toward a sacramental act; it does what it says, calling to mind a history, drawing together disparate voices, making us “a people.”

I have sung this song in overwhelmingly white Catholic worshipping assemblies. Though it sometimes feels odd, it is clear to me this is a good thing. Even if only on the weekend we celebrate the Rev. Dr. Martin Luther King Jr. or during Black History Month, it provides for a culture of encounter.

I am not sure if Representative Clyburn’s proposal is the right political choice today. Before an act of Congress, we would be better served by employing the song in a national multi-year program for truth and reconciliation, not just about the racial divide but about being American. These are the labor pains of becoming a people. However imperfect, we would find ourselves anew, with weary feet and a gloomy past. We will have earned it. We would be singing—hand on heart—standing together.

[Read this next: The black Catholic nun every American should know]

Lift every voice and sing,
Till earth and heaven ring,
Ring with the harmonies of Liberty;
Let our rejoicing rise
High as the list’ning skies,
Let it resound loud as the rolling sea.
Sing a song full of the faith that the dark past has taught us,
Sing a song full of the hope that the present has brought us;
Facing the rising sun of our new day begun,
Let us march on till victory is won.

Stony the road we trod,
Bitter the chast’ning rod,
Felt in the days when hope unborn had died;
Yet with a steady beat,
Have not our weary feet
Come to the place for which our fathers sighed?
We have come over a way that with tears has been watered,
We have come, treading our path through the blood of the slaughtered,
Out from the gloomy past,
Till now we stand at last
Where the white gleam of our bright star is cast.

God of our weary years,
God of our silent tears,
Thou who has brought us thus far on the way;
Thou who has by Thy might
Led us into the light,
Keep us forever in the path, we pray.
Lest our feet stray from the places, our God, where we met Thee,
Lest, our hearts drunk with the wine of the world, we forget Thee;
Shadowed beneath Thy hand,
May we forever stand,
True to our God,
True to our native land.

Correction. Feb 3, 2021: Due to an editing error, a previous version of this article incompletely stated that the Johnson brothers were from Jackson, Fla. They were born in Jacksonville, Fla. America regrets the error. 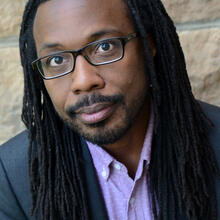 Eric T. Styles is rector of Carroll Hall, an undergraduate residential community at the University of Notre Dame. He writes on theology, liturgy, culture and the performing arts. Since 2013 he has also been a collaborator with Afro House, a music-driven performance art ensemble based in Baltimore.