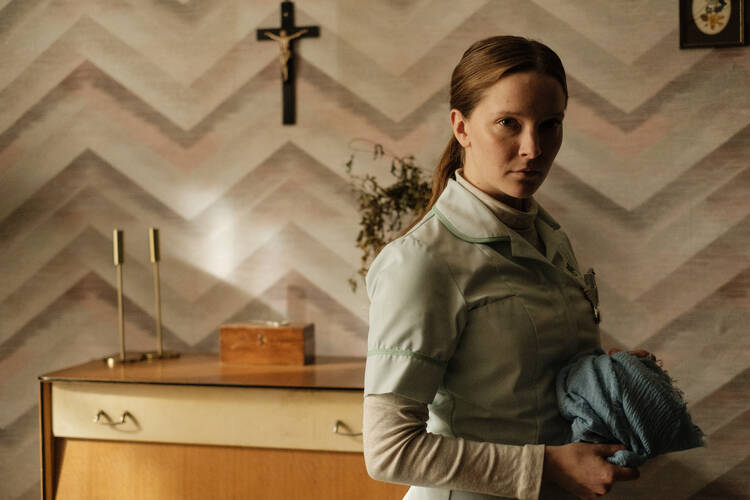 God speaks Welsh in “Saint Maud”—at least he does to Maud, the latest entrant in the religious-obsessives-are-the-craziest-people movie catalogue. A sophisticated creep-fest from debuting feature director Rose Glass, “Maud” owes some debt to the Roman Polanski of “Repulsion” and “Rosemary’s Baby,” to Brian De Palma’s “Carrie” and to the sound design of her own Paul Davies, whose unnerving noise recalls the better contemporary horror films of James Wan (“The Conjuring,” “Insidious”). The other debt it owes is to the commonly held belief—in movies at least—that overwhelming faith is the equivalent of madness.

“Saint Maud” is the latest entrant in the religious-obsessives-are-the-craziest-people movie catalogue.

Is it? The lives of the sainted martyrs certainly give us ordinary mortals pause: How many would renounce their faith—only for a moment, right?—rather than be burned at the stake á la Joan of Arc? But the defining characteristic of Maud (Morfydd Clark), at least as conduit of cinematic thrills, is her devotion to the mortification of the flesh, the power of redemptive pain: She inverts nails in the soles of her sneakers and walks in agony along the seedy streets of the English seaside town where she works as a private nurse. She kneels on unpopped corn kernels while praying at the modest shrine in her rented room. “May God bless you and never waste your pain,” she tells a sickly homeless beggar. In all this, director Glass finds the seeds of horror.

This is certainly not untraveled territory, though “Saint Maud” is original in its way. Most of those characters in the cinema of, shall we say, enhanced faith have used religion as a cudgel, an alibi for evil or a means of extortion. It is hard to argue that Robert Mitchum’s Harry Powell, the villainous Bible quoter in “The Night of the Hunter,” was possessed by sincere belief, or that Paul Bettany’s albino priest in “The Da Vinci Code” was an agent of divine beneficence. While those films contained elements of horror, Maud is more in tune with Ethan Hawke’s minister in Paul Schrader’s “First Reformed” or the priests in Martin Scorsese’s “Silence,” who are of a reasoned belief that leads them to horrific, or at least melodramatic, extremes. Maud, imprisoned in a sense by the genre, is not given the benefit of intellectual doubt. On the other hand, Glass’s film doesn’t treat women the way horror movies generally do, like bait or meat.

What it was that happened—and caused Maud’s violent conversion—is left to our nervous imaginations.

We don’t really know what Maud’s story is, though there is one: The film begins with a fractured series of images of a blood-smeared examining room, with a body inert on a table and Maud herself cowering in a corner. When she goes to work caring for a former dancer and choreographer named Amanda Kohl (Jennifer Ehle), who is fatally ill, she has done so through a private agency that is apparently a bit lax with the background checks. When an old acquaintance meets Maud, whom she calls Katie, on the street, she asks, “Do they know about…?” They assuredly do not, judging from Maud’s reaction. What it was that happened—and caused Maud’s violent conversion—is left to our nervous imaginations.

Clark, whom some may know from the recent “Personal History of David Copperfield” (in which she played both Clara and Dora) is precisely raw-edged and overwound, like an unstable spindle, imbalanced in a way that makes the viewer’s toes twitch. Ehle gives an arresting  performance, as always, as Amanda, embittered by her disease and patronizing toward Maud and her mission to save Amanda’s soul. What she specifically needs saving from, Maud thinks, includes a female lover (Lily Frazer), a view that casts Maud’s intentions as more conventionally conservative than divinely inspired.

But one of the saving graces of “Saint Maud”—in fact, its chief virtue—is the disequilibrium one experiences watching her walk the line between mere disturbance and outright insanity. Is Maud a saint, or is she beset by demons? It is not until the final frame of the film that Glass makes an unequivocal statement. Viewers will not only be shocked by it, they will be shocked by how shocking, in the end, it actually is.