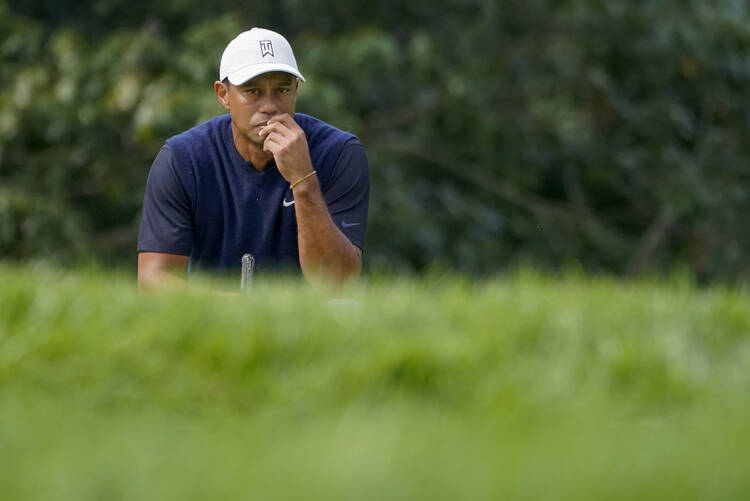 Tiger Woods, of the United States, waits to hit on the 13th hole during the first round of the US Open Golf Championship, Thursday, Sept. 17, 2020, in Mamaroneck, N.Y. (AP Photo/Charles Krupa)

My first memory of watching Tiger Woods win a major championship was in 2008, when I was 11 years old. With Tiger winning the U.S. Open on a broken leg in an 18-hole playoff (plus an additional sudden-death hole), some consider it to be the greatest golf victory of all time. It was his 14th major championship, a remarkable accomplishment surpassed only by one other man, Jack Nicklaus.

It would be Woods’s last major championship victory for another 11 years.

The documentary shows that Tiger’s development as a human being came second to his golf.

Scandal, injury and addiction plagued Tiger in the years between major wins, and HBO’s new two-part documentary series, “Tiger,” attempts over the course of three-plus hours to explain the personal and professional derailment of the world’s best golfer. It does this by combining footage of Tiger—from his childhood, from his golf tournaments and from his interviews—with commentary from a diverse cast of people close to Tiger at different points in his life: his first girlfriend, his longtime caddie, close friends and, notably, Rachel Uchitel, the woman at the center of the sex scandal that upended Tiger’s personal life in 2009. Tiger does not give an interview for the series, nor does anyone in his current inner circle.

The documentary is hardly the first to take up the story of Tiger’s struggles, nor do I believe it to be the best account of his travails (I would refer to Wright Thompson’s sublime 2016 feature story for ESPN). But it is perhaps the most comprehensive, and worth watching for that reason.

Scandal, injury and addiction plagued Tiger in the years between major wins.

The documentary alternates between golf highlights and personal stories. To be frank, the golf sections are not well produced. True, they show exciting highlight reels from key tournaments in Tiger’s career, but these moments lack drama or serious intrigue. Highlights are often given little context (or shown out of order) and Tiger’s victory is a foregone conclusion in each. Commentary from the interviewees is at its most clichéd during these “golf sections.” The golf simply is not analyzed at a high level.

This is where the absence of an interview with Tiger is most deeply felt. In contrast to “The Last Dance,” ESPN’s 2020 documentary on Michael Jordan, where Jordan himself weighs in on his defining career moments, “Tiger” lacks that first-person perspective on what it is like to play a sport at the highest level.

What the series lacks in golf analysis, it makes up for in stories of Tiger’s personal life.

What the series lacks in golf analysis, however, it makes up for in stories of Tiger’s personal life. We see how in Tiger’s youth his father, Earl Woods, was simultaneously capable of creating a generational talent on the golf course while neglecting his son’s mental and emotional growth. Two of Tiger’s role models—Earl and Joe Grohman, who worked at the golf course Tiger grew up playing—openly pursued women in front of Tiger, and Earl would sometimes sleep with them in an R.V. parked near the golf course.

Tiger’s interest in anything besides golf was swatted away by his father. In one telling anecdote, Tiger’s kindergarten teacher explains how she asked Earl, at Tiger’s request, whether Tiger might be able to take up any other sports. Earl’s reply? Five-year-old Tiger needed to focus on his golf.

Stories like these set up the most intriguing part of the documentary: its portrayal of Tiger as a victim rather than a villain.

Tiger’s interest in anything besides golf was swatted away by his father.

The documentary shows that Tiger’s development as a human being came second to his golf, at least in the eyes of his father. His first girlfriend, Dina Parr, expresses her concern about Earl’s master plan that steered Tiger’s early life. “Why would you put that on your kid?” she asks.

Add to this mix the siege of media attention Tiger received from a very young age, and it is no wonder that he began to look for outlets for ways to express himself freely. Parr reminisces about the fun-loving Tiger, the one who would emerge in their time spent together; at one point we see a remarkable video of Tiger dancing with some friends, Hawaiian shirt half unbuttoned, clearly without a care in the world. And yet Tiger’s relationship with Parr had to be sacrificed—abruptly and presumably at Earl’s intervention—to eliminate any distraction from golf.

The documentary certainly borders on making excuses for Tiger’s infidelity.

In this way the documentary begins to paint an image of Tiger, the victim. When it revisits his extensive cheating scandal of the late 2000s, we see interviews with several of the women with whom Tiger was involved. The relationships were not just physical—each of them testified to an emotional component, as if Tiger’s true self still had not found the outlet he began seeking as a teenager. We remember Tiger’s unfulfilling emotional upbringing, feel horror at the prospect of being smothered by the media and—is that sympathy we feel for this man who destroyed his family?

Maybe. The documentary certainly borders on making excuses for Tiger’s infidelity. Then it points to his recent personal transformation (he has become generally more personable and fun-loving in the public eye these past few years) as proof that he was never such a bad guy after all.

This theme, not explicitly spelled out in the show but lying beneath the narrative surface, does Tiger’s story an injustice. He had a difficult upbringing but also willingly made horrible choices. He brought suffering on himself as well as others. In other words, he is a complex man who lives at the complex intersection of deeply felt tendencies and difficult moral choices.

Pete McDaniel, a family friend of Tiger’s, seems to best grasp the implications of this point at the end of the series, as we see Tiger win his 15th major championship at the 2019 Masters: “A lot of people would spin it like [Tiger]’s a different man now, he’s the conquering hero. But, these are the same people that, when he was riding high, they were pulling for him to fall. And when he fell, they jumped on him with both feet. And when he rose again, all the sudden, he is a virtuous man now. Which, to me, is bulls--t.”

“He’s a human being,” says McDaniel. “The problem is, we always made him out to be more than he was.”

Perhaps that is the great lesson, and caution, of the Tiger Woods story.