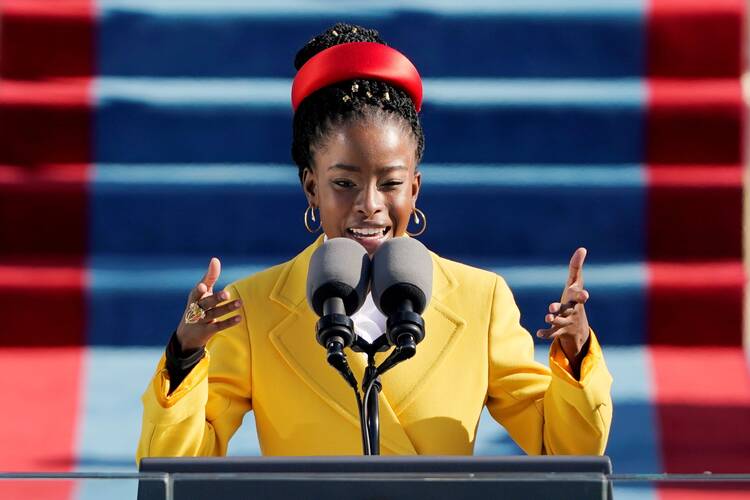 American poet Amanda Gorman reads a poem during the inauguration of Joe Biden as the 46th president of the United States at the Capitol in Washington Jan. 20, 2021. She is a parishioner at St. Brigid Catholic Church in Los Angeles. (CNS photo/Patrick Semansky, pool via Reuters)

There was a moment at President Biden’s inauguration Wednesday when Senator Roy Blunt, garbed in black, stepped back from the podium after introducing the next speaker. The camera panned out to the blue and red-flanked rug, Vice President Harris’s stunning purple and someone’s splash of pink scarf and then—yellow. Yellow, exactly what we needed. Amanda Gorman’s favorite color, in the form of a winter coat. There is a reason the author of Revelation envisioned a heaven soaked in gold.

Then this young woman, dressed bright as a canary, stepped up to the microphone, teeth to the world, gold in her hair and hanging from her ears, and asked a question so familiar: “When day comes we ask ourselves, where can we find light in this never-ending shade?” And there went her hands, lifting the question up before settling it back down with her fingers.

"Where can we find light in this never-ending shade?"

As she went on, Ms. Gorman’s words brought something good and true to life, letting us release the breath we’ve been holding while “we’ve braved the belly of the beast.” She reads these words and I’m following her and letting the tension break because of the alliteration. I need that alliteration. I need it to pull the bravery she sees through the belly of a national future that so often still feels like a beast.

Named the first ever national youth poet laureate in 2017, Gorman, who is also a member of St. Brigid’s Catholic Church in Los Angeles, was the sixth poet to recite for the nation at a presidential inauguration. She delivered a performance that made us believe in the beauty of our future, precisely because of the poem’s own beauty. Her work speaks of God—even shines a light on God—simply because it is beautiful.

Robert Frost was the first poet to read at a presidential inauguration. He had written “Dedication” for John F. Kennedy but couldn’t read in the sunlight’s glare so he pulled another from his memory: “Something we were withholding made us weak/ Until we found out that it was ourselves.”

She delivered a performance that made us believe in the beauty of our future.

President Clinton brought the inaugural poem back in 1993 with Maya Angelou’s “On the Pulse of the Morning.” (Several of our editors were on the national mall that day.) “A Rock, A River, A Tree,” it started, a reminder of our common ancestry. It asked all to sit down at the foot of our origins and birth again the dream that will reveal our true face.

In 1997, Miller Williams intoned for Bill Clinton: “We have memorized America... But where are we going to be, and why, and who? The disenfranchised dead want to know.” Come 2009, Elizabeth Alexander stood before Barack Obama and asked, “What if the mightiest word is love?” The inaugural poet in 2013 was Richard Blanco, whose family had fled Cuba for Madrid when he was seven months old and eventually ended up in Miami. He recited, “We head home,” where under a single sky we “hope—a/ new constellation/ waiting for us to map it,/ waiting for us to name it—together.”

It will not do to tell me in a speech that “we’ve gone through hard times.” To declaim, “We’ve suffered and we’ve prevailed, still.” No, I need poetry. I need someone like the latest inaugural poet to make that chamber of darkness echo. To remind us that we are not “striving to form a union that is perfect” but “striving to forge a union with purpose.”

Now listen…. Did I hear that correctly? “Somehow we’ve weathered and witnessed/ a nation that isn’t broken/ but simply unfinished.”

Are you sure, Amanda, that we are not broken? I feel—we feel—so broken! But then, she may be right. We are always unfinished because that is what it is to be human—to live between what is and what is to come, offered here in the shape of a rhyme.

It will not do to tell me in a speech that “we’ve gone through hard times.”

Ms. Gorman brought her hand to her chest, promising “and yet the dawn is ours.” Does that also mean the dawn comes and breaks in our chests?—and here I am, believing her. I cannot help but believe; through this beauty, the Lord helps my unbelief.

We will not be turned around
or interrupted by intimidation
because we know our inaction and inertia
will be the inheritance of the next generation
Our blunders become their burdens
But one thing is certain:
If we merge mercy with might,
and might with right,
then love becomes our legacy
and change our children’s birthright

The poet recites. The poet rhymes. The poet swirls her wrist against the “turn around,” rolls one hand over the other like a cycle of inheritance and blunder, lifts a single finger to denote the one thing that is certain. In a single in-and-out of the breath, Amanda Gorman gives us the ability to weave love into eternity, the past we leave behind and the future we offer.

And here I am, believing her. Through this beauty, the Lord helps my unbelief.

Beauty is not merely a bonus feature of creation or life or God. Beauty reveals something of what creation and life and God fundamentally are. We are part of a mystery, the Holy Mystery of Love that Leo O’Donovan, S.J. also petitioned in his inaugural invocation. We believe in something we cannot at the moment see or touch or logic our way through. We just know it to be true, and we know it to be good, because first it is beautiful.

“Only that which has form can snatch one up into a state of rapture,” wrote the theologian Hans Urs von Balthasar. “Only through form can the lightning-bolt of eternal beauty flash. Without form, in any event, a person will not be captivated and transported. To be transported, moreover, belongs to the very origin of Christianity. The Apostles were transported by what they saw, heard, and touched.”

Amanda Gorman transported me. I believed in the light and the goodness and the vision of holiness Ms. Gorman laid out because she offered it to me as music and image and breath. I would not believe in what is good and true if it were shouting at me, deadpan, no color or image in its offering.

If this is the sort of thing that beauty does, maybe having a poet at a political event shouldn’t be such a rarity. We could all, every day and definitely at the hours of our renewal, invite God to help us believe in goodness and truth by opening the moment up to poetry.