Remembering John le Carré, who knew that deep down, we all want to be secret agents 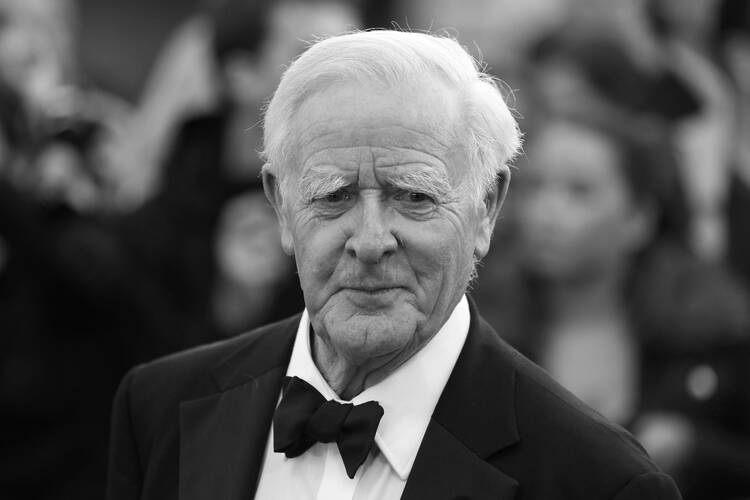 Among the many fans of British novelist John le Carré, who died on Dec. 12 at the age of 89, was an America editor in chief: Thurston N. Davis, S.J., who filled the top job from 1955 to 1968. Davis wrote several long reviews of le Carré’s novels in the 1960s and 1970s, including a 1977 review of The Honourable Schoolboy that perhaps got to the heart of le Carré’s popularity and longevity. “The commercial success of John le Carré’s spy tales is no accident,” Father Davis wrote. “Partly, I suppose, it is explained by the theory that there is a secret agent deep in us all, and that the author simply knows how to feed those hidden fantasies.”

Father Davis, who had a Ph.D. in philosophy from Harvard and also edited The Catholic Mind for many years, might seem an unlikely fan of a spy novelist. Most of his reviews for America over the years were on serious books of history or theology. But, then again, John le Carré was closer on the literary spectrum to Graham Greene (who also knew his way around a good spy novel) than to his fellow popularizers of the genre. In 2008, London’s Sunday Times put him 22nd on their list of the 50 greatest British writers since 1945.

In addition to appealing to the inner secret agent in all of us, John le Carré also introduced millions of readers to a world of espionage that looked nothing like an Ian Fleming novel.

Father Davis did admit that Americans don’t tend to come off well in le Carré’s works, including C.I.A. agents who “incidentally, speak a peculiarly objectionable brand of American English. They tend to come from places like Norman, Oklahoma, and they despise the ‘Brits,’ who return that sentiment in genteel kind.” And indeed, one does not read le Carré’s early novels without getting the distinct sense that the United States was, in fact, regularly being mocked—in a particularly dry and subtle British way.

In addition to appealing to the inner secret agent in all of us, however, le Carré also introduced many millions of readers to a world of espionage that looked nothing like an Ian Fleming novel; in fact, Le Carré himself one described his most famous character, the rumpled and bookish George Smiley, as the “antidote to James Bond.”

John le Carré’s death from pneumonia brought an outpouring of grief and commentary from Great Britain but also from other corners of the globe. Stephen King tweeted that “This terrible year has claimed a literary giant and a humanitarian spirit,” while Stephen Fry wrote that “if there is a contemporary writer who's given me richer pleasure I can't for the moment name them.” Margaret Atwood wrote “His Smiley novels are key to understanding the mid-20th century.” (Unsurprisingly, the heads of the British intelligence services MI5 and MI6 have not always had such kind words for le Carre over the years, though the current director of MI6 did praise him as “a giant of literature who left his mark on #MI6 through his evocative & brilliant novels.”)

John B. Breslin, S.J., once noted that le Carré’s books depicted “authentic espionage,” and "the classic dilemma of every intelligence operation: Who watches the watchers?”

John le Carré’s most famous novels are probably the dense, carefully crafted Cold War thrillers collectively known as the “George Smiley novels,” including The Honourable Schoolboy, Tinker, Tailor, Soldier, Spy and The Spy Who Came In From The Cold, but they are but a small part of his output of 25 novels and a memoir over a career that spanned more than half a century. A number of his books were later made into films as well, including The Constant Gardener, The Tailor of Panama, The Spy Who Came In From The Cold and Tinker, Tailor, Soldier, Spy.

Nothing is as it seems in this new World War II novel.
Diane Scharper

Born David Cornwell in 1931 (he adopted John le Carré as a pen name when his first novel was published in 1961), he had an insider’s view of Cold War espionage, because he worked briefly as an agent for the famed “MI5.” This firsthand experience of a world filled with betrayal, suspicion and intrigue also gave his characters a hardboiled and psychological complexity that is often lacking in other espionage thrillers. (No one could ever confuse George Smiley with Tom Clancy’s Jack Ryan, and certainly not with James Bond.) His books are not truly action-packed either; they are dense on interpersonal relations carried out in somewhat dingy hallways and dusty streets, the latter in locations all over the globe.

He is survived by his wife Valerie Jane Eustace and four sons.