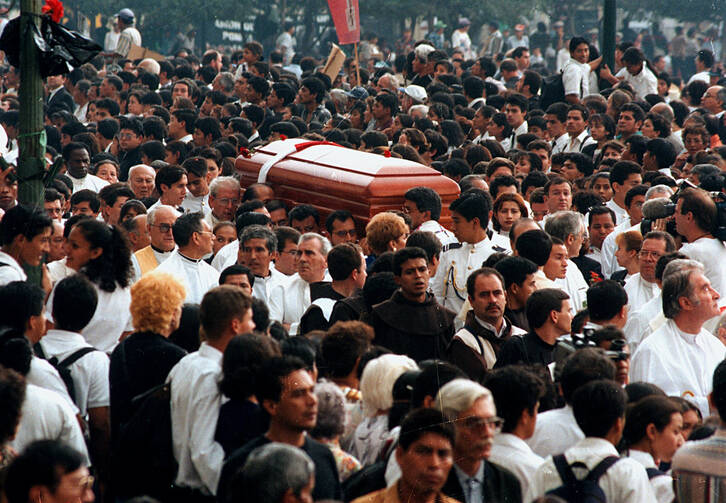 On Jan. 31, 1980, machetes and guns drawn, activists hid in the ambassador’s office of the Spanish Embassy, locked from the inside. The exasperated group of campesinos—farmers and peasants—had come to Guatemala City from the Quiché region to seek justice for a decade of suffering. Their struggle began in the early 1970s, when the government of Guatemala started taking oil-rich land from indigenous Mayan families.

In 1976, Father Bill Woods, an American priest and pilot who tried to help the resettled groups, was threatened by the government. They told him to leave. The next time he returned, they shot down Woods’s small plane, killing him and his four passengers. In the next few years, four more priests were murdered, including a Belgian missionary who was executed outside his parish house. All of the murdered priests had actively fought to protect the local poor.

“The Art of Political Murder” reveals what happened when the government finally had enough of Bishop Juan José Gerardi Conedera.

Desperate, those farmers took matters in their own hands and forcibly occupied the embassy. Tempers flared, but negotiation was in sight—until the police swarmed the building. Soon the police started to break down the office door, despite the ambassador’s pleas that they were breaking international protocol. What happened next might never truly be clear: Either a campesino threw a Molotov cocktail or a police officer started a fire. Either way, the embassy was engulfed in flames and the activists were trapped inside. Thirty-seven people died.

In the aftermath of the massacre, Juan José Gerardi Conedera, the bishop of El Quiché, said Guatemalan military violence and oppression was rooted “in a system of economic, social and political development, supported by a doctrine of national security, that doesn’t take into consideration the interests of the poor, forcing people to live under a reign of terror.” He was adamant: “As human beings and as Christians, we cannot but raise our voice in protest against the intolerable situation that has led to the death of our sisters and brothers.” The government and military took notice. Bishop Gerardi was a dangerous man: a man of God, unafraid to hold those in power accountable.

Gerardi was assassinated as retribution for his work to reveal the military atrocities against civilians during the country’s long civil war.

“The Art of Political Murder,” a new documentary on HBOMax based on the Francisco Goldman book of the same title, reveals what happened when the government finally had enough of Bishop Gerardi. Nearly two decades after the embassy massacre, Gerardi was assassinated outside of his parish house in San Sebastián as retribution for his work to reveal the military atrocities against civilians during the country’s long civil war. The documentary is a deft retelling of the assassination, cover-up and road toward justice; it is also a dramatic introduction to the person known as the “[Archbishop Óscar] Romero of Guatemala.”

Gerardi’s brutal assassination was the direct result of his revelation about military massacres: He named names in front of a national audience. On April 24, 1998, at the Metropolitan Cathedral, Gerardi summarized a three-year, thousand-page-plus report of dizzying violence against civilians. The report could only be graphic: torture, amputations, the killing of children and burning victims alive, among other horrors.

The military’s secrets were now out in the open. Two days later, Gerardi was dead.

On April 24, 1998, at the Metropolitan Cathedral, Gerardi summarized a three-year, thousand-page-plus report of dizzying violence against civilians.

“The Art of Political Murder” starts there and moves at a steady clip through interviews with Gerardi’s associates and friends, local journalists, investigators and Goldman himself. Investigative and trial footage are complemented by the occasional re-enactment. There is a fair amount of talking, but those involved remain wounded by those events. It is a documentary of told stories, yet those stories feel immediate. Gerardi’s especially brutal murder feels oddly contemporary, as if the film were made only months after the assassination.

The film’s dramatic focus on the murder and the aftermath, though, means there is a complex and theologically rich portion of the story that remains relatively untold. You need to read Goldman's book for a more thorough exploration of Gerardi’s ascension to Romero-like heights. His death was nearly foretold and inescapable.

Even before the embassy burned in 1980, Gerardi was vocal in his criticisms of the government. He called the state’s treatment of the poor, which included violence, “a sinful situation that contradicts, opposes and makes difficult the implantation of the Gospel values of the Reign of God.” Instead, the government had “the thirst for riches, injustice, the desire for power.” He said of the Catholic Church: “We want our word to be one of encouragement and comfort for all those who suffer. We also want this word to be the voice of the voiceless so that they are able to make their necessities heard and denounce the injustices that they suffer.”

Bishop Gerardi is seen by many as a martyr. He bore witness to decades of suffering and death.

In his 1977 Lenten message, Gerardi quoted from Pope Paul VI’s “Evangelii Nuntiandi”: “But evangelization would not be complete if it did not take account of the unceasing interplay of the Gospel and of man’s concrete life, both personal and social.” The church has to act on behalf of the poor, for the poor are the church—the poor are Christ among us. These same poor were the ones burned alive at the embassy. It took until 2015 for Pedro García Arredondo, the former Guatemalan police chief who ordered that no one be allowed to escape the burning building, to be convicted.

After the embassy massacre further escalated tensions in the region, Gerardi remained steadfast in his views—but a failed assassination attempt on the bishop forced him to make a drastic decision. Gerardi, along with clergy and religious women, ultimately had to flee the diocese under constant threats. He personally appealed to Pope John Paul II, who responded in a letter to Guatemalan bishops: “I well know the anxieties you have communicated to me on more than one occasion, even publicly, in the last few months, for the many, far too many acts of violence that have racked your country, and your repeated calls for an end to what you have rightly called ‘the road to self-destruction’ that violates all human rights—first among them the sacred right to life—and that does not help to solve the social problems of the nation.”

Bishop Gerardi was killed 20 years ago in Guatemala. The search for justice continues today.
Jackie McVicar

Yet even with the pope’s support, Gerardi remained in exile in Costa Rica for two years. When he did return in 1984, he was named auxiliary bishop of the Archdiocese of Guatemala. Five years later, he created the archdiocese’s Human Rights Office, which led to the Recovery of Historical Memory project—the methodical investigation in which Gerardi and his colleagues interviewed Guatemalan victims of state violence. He wanted to record and tell their stories—their testimonies. Rigoberta Menchú, the Guatemalan human rights activist who received the 1992 Nobel Peace prize, called Gerardi “our bishop of reconciliation” for his efforts. Her usage of reconciliation here is telling; there is a penitential element to both sharing and documenting pain.

Although the full backstory isn’t essential to a casual viewing of the film—and I do not mean casual to imply that the movie is anything less than compelling and at times harrowing—it helps to explain why Gerardi is seen by so many as a martyr. He bore witness to decades of suffering and death. He stood in front of the press and the cameras to give his testimony. Most importantly, he stood in front of the perpetrators—those callous from years of violence and conceited with power—and called evil by its name. He gave his life for his witness. But in following Christ, he knew there could be no other way to live.

— Netflix announces new series that will feature Pope Francis
— Why does God allow suffering? A meditation
— Read: Pope Francis on how prayer reveals our common humanity

Nick Ripatrazone has written for Rolling Stone, The Atlantic, The Paris Review and Esquire. His books include Ember Days, a collection of stories, and Longing for an Absent God: Faith and Doubt in Great American Fiction.