August Wilson will not go quietly: a review of 'Fences' and 'Jitney' 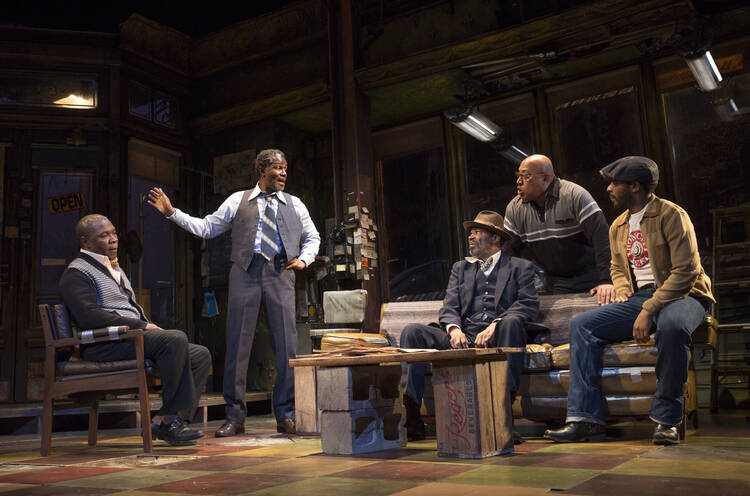 Greatness does an artist no favors, at least not in two areas that count the most: the quality of the work they do while they are alive and their connection to audiences after they are gone. Once August Wilson acquired the mantle of Great American Playwright, some time around the occasion of his 1987 Pulitzer and Tony awards for his drama “Fences,” he wore it proudly, occasionally self-consciously, but always with extraordinary grace. Most importantly, he did not let it stand in his way. Unlike others who have batted in that league—Arthur Miller, Tennessee Williams, Lorraine Hansberry, Tony Kushner—Wilson managed to keep his eyes resolutely focused on the stage, producing one of the strongest streaks of any American artist in any form. If his plays did begin to strain with significance by the end, it was less because the acclaim had gone to his head than because of more mundane creative kinks: repetition, fatigue, a few creative blind alleys.

Since he died in 2005, his stature has only increased, with his name regularly appearing on annual lists of the nation’s most-produced playwrights, and his astounding legacy—a 10-play cycle about African-American life in each decade of the 20th century—is justly cited as a kind of literary and theatrical monument. He is now taught in schools and embraced as a kind of American Shakespeare, with all the good and bad that implies: honor and reverence, but also ubiquity and sanctity. In short, he has joined the required-reading list of Great Writers You’re Supposed to Love. But is he in danger of embodying that pantheon’s flip side: Great Writers No One Will Admit They Don’t Enjoy?

Imagine Tennessee Williams punching up the dialogue of an earnest Arthur Miller father/son drama, and you get some idea of the embarrassment of riches here.

Two new productions of his work—a film version of “Fences”and a Broadway production of “Jitney”—handily make the case for his continued vitality, even as they flag some signs for concern. “Fences,” directed by and starring Denzel Washington, turns this great tragedy of thwarted manhood into a sumptuous, brooding prestige drama, with mostly salutary results. It is both stunning to see and hear Wilson’s mid-century Pittsburgh realized on the big screen for the first time, and somewhat disconcerting to notice how much the intimacy and granularity of film forefronts the seams in Wilson’s writing: both his lyrical language and the reiterative bagginess of his dramaturgy. Imagine Tennessee Williams punching up the dialogue of an earnest Arthur Miller father/son drama, and you get some idea of the embarrassment of riches here.

Washington and Viola Davis reprise their roles from 2010’s solid Broadway revival as Troy and Rose, a mid-1950s couple living a version of the American Dream in a cozy middle-class home. Soon, of course, the cracks in the foundation are exposed: Troy is an ex-baseball player and reformed convict, embittered that he has been reduced to a job on a garbage truck and prone to seek relief in boozy tall tales and a little extramarital carousing. Rose is a domestic rock whose exchange of autonomy for stability will exact a terrible price, and their teenaged son Cory (Jovan Adepo) is caught between them, in a classic, even Oedipal struggle of parental expectations, with a racial overlay. Troy sees no future in Cory’s football efforts, not just for the usual get-a-real-job reasons, but also because his own baseball ambitions were sidelined as the Negro Leagues fell victim to major-league integration.

The father/son conflict bears this larger cultural baggage remarkably well. In one of the play’s signature exchanges, Cory pleads with his father, “How come you ain’t never liked me?” In the testy dialogue that follows, Troy makes a searing case for debt and duty over love: A father is obliged to provide for his son as sure as his boss is obliged to pay him for his work; affection doesn’t enter into it. Troy concludes with a startlingly clear-eyed takeaway, as salient to the collective fight for justice as to the individual business of getting by: “Don’t you try and go through life worrying about if somebody like you or not. You best be making sure they doing right by you.”

The new Broadway staging of “Jitney” does right by Wilson, showcasing his polyphonic voice with supreme, seemingly improvisatory confidence, in a production directed by Ruben Santiago-Hudson at Manhattan Theatre Club. Set in a dilapidated car-service office in late-1970s Pittsburgh, “Jitney” is not Wilson’s finest dramatic construction, and it must be said that this production has some casting hiccups. But it rightly finds its heartbeat in its discursive scenes of jitney drivers shooting the breeze between calls. It’s not all mere breeze: There is some hard-knock talk, as well as Wilson’s signature flights of lyricism, amid the diversions. The standout work, as is often the case in his plays, comes from supporting players like Keith Randolph Smith, who plays Doub, a wary observer with a Troy-like self-reliance gospel and a harrowing Korean War story.

The Broadway musical has been born again. Will movie musicals be far behind?
Rob Weinert-Kendt

Similarly, the secret weapons of “Fences” are the supporting performances of Stephen McKinley Henderson, as Troy’s loyal friend Bono; Russell Hornsby as Lyons, Troy’s musician son from a previous marriage; and Mykelti Williamson as Gabe, Troy’s brother, mentally impaired by a war injury. Even more so than onstage, the reactions and interactions of these secondary characters register with the force of deep listening and feeling, as film close-ups can uniquely do. It is a tribute to the fullness of Wilson’s imagined world that “Fences” achieves some of its most memorable moments between and around the dialogue, or without it entirely. That may be as sure a sign as any that this great playwright is here to stay. As Troy taunts Death on more than one occasion: “I ain’t going easy.”